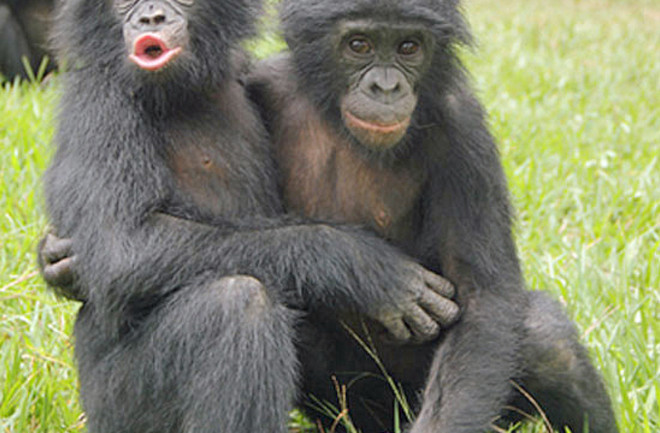 One juvenile bonobo embraces another after it lost a fight. Credit: Zanna Clay, Òlola ya Bonoboó Just as young children may have trouble dealing with their emotions in tough situations, young bonobos must learn to regulate their emotions as well, researchers have found. Study co-authors Zanna Clay and Frans de Waal focused on juvenile bonobos that had been raised by their mothers and those that were orphaned---often as a result of the illegal bushmeat trade in the Democratic Republic of Congo. The research, published today in PNAS, was based at the Lola ya Bonobo Sanctuary in Kinshasa. The parallels with human children are striking. The juvenile bonobos who have more stability and adult guidance at home end up better able to handle their own emotions and identify with the feelings of others when situations are rocky.

The Emory University researchers watched the bonobos' interactions on video, and analyzed what happened right after more than 370 instances of stressful situations, such as fights or tantrums. Youngsters reacted differently, Zanna Clay explained to The Verge:

"In the aftermath of a fight, some bystander bonobos simply fled the scene, some froze up on the spot and some actually ran towards the incident to offer comforting contact to the victim."

The researchers found that those young bonobos that were able to calm themselves down most quickly after altercations were also those most likely to console another individual in distress. What's more, these socially well-adjusted bonobos were far more likely to have been raised by their mothers. Orphaned apes, on the other hand, were less likely to offer consolation. This consolation behavior through contact, such as by touching, embracing and kissing, suggests that the young bonobos are expressing empathy.

As de Waal wrote in an email to The Verge:

"It is almost as if one first needs to have one's own emotional house in order before one is ready to visit the emotional house of another. This is true for children, and apparently also for bonobos."

But, as reported by the BBC, evolutionary psychologist Richard Byrne of the University of St. Andrew wasn't quite as convinced by the research itself:

He pointed out that the term "consolation" implies that we know about the emotion of the apes and their reasons for intervening, which, he said, "is not part of the observed data." "But they are our closest relatives, so personally I would argue that the best guess of their emotions is that they'd be the same as our own in a similar situation."