It seems simple, but only a few animals are capable of identifying objects across senses. 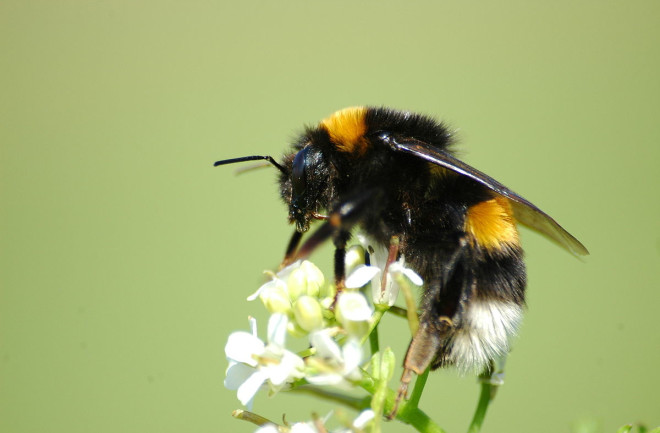 When you feel for your glasses in the night or jangle your bag to hear your keys before you leave, you don’t think about what you’re doing. You’re just relying on touch or sound to identify something that you would otherwise use your eyes to find. Sounds simple, right?

Well, not all animals can do that. So far, scientists have found that only a handful of species, such as humans, apes, dolphins and some fish, can learn about an object with one sense and later identify it with another. Thanks to a new study published in the journal Science, researchers can add bumblebees to that short list of savvy sensors.

Bumblebees have the smallest brain yet of any animal found to possess this mental skill — a discovery that brings researchers closer to understanding what a brain needs to pull off a sensory switcheroo.

“Studying [this] in bees with a brain the size of a sesame seed gives us a good opportunity to see how much cognition and intelligence can fit into that small of a brain, but also what is needed for it to occur,” says study co-author Cwyn Solvi, a cognition researcher at Queen Mary University of London and Macquarie University in Australia.

Everything our brains accomplish — emotional processing, physical growth and more — comes from a fireworks display of biological processes taking place in nerve tissue throughout the body. And if it’s all biological, then it evolved from somewhere, Solvi says. “Therefore, it’s likely some animals have some degree of these cognitive abilities. It’s our job to know which animals have those.”

Enter the bumblebee. These striped pollen collectors are some of the most-studied insects when it comes to cognition, primarily because they seem to have the most impressive mental skills, Solvi says. Some of her earlier work showed the insects teach each other new skills, for example — so it made sense to set up an experiment to see how well the bees could alternate between their senses.

Read more: Not Only Can Honeybees Count, They Can Also Do Math

Solvi and her two co-authors, Selene Gutierrez Al-Khudhairy and Lars Chittka, got two containers — one cube, one sphere — and trained bees to recognize which one had tasty sugar solution and which one had bitter quinine. One bee group was exposed to the containers in a lit room without touching them, relying on just their sight to figure out which contained which solution. The other group could touch them, but only in the dark. When the team switched the conditions, both groups of bees still spent more of their time at the container used to hold sugar.

The team doesn’t know of any situations in the wild where bumblebees might rely on one sense to make up for another. Other lab experiments show, however, that if asked to forage among flowers in a dark lab, bumblebees will do it.

They also don’t know how the bees were connecting what they felt to what they saw. Did they detect the whole shape, or were they just distinguishing a flat from a curved surface? That distinction is hard to get without a verbal report, Solvi says. Their experience is likely different than ours, though “it’s hard to imagine what a basic level of consciousness is,” Solvi says.

If it turns out other insects have this skill, then this particular mental capacity might date back millennia, Solvi says. Though that sounds surprising, “our study suggests there’s a lot more going on than we give bees credit for,” she notes.