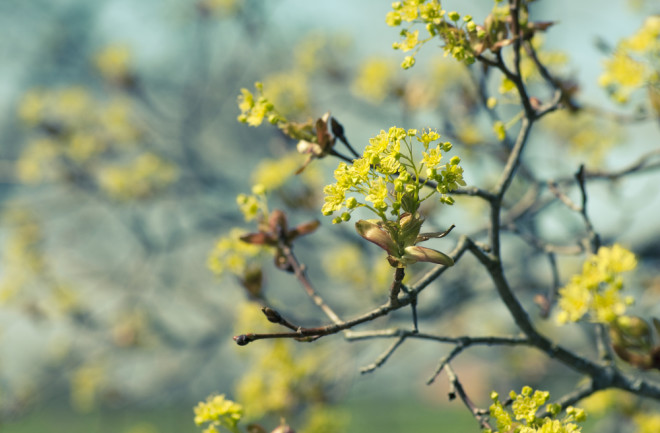 (Credit: Andris Tkacenko/Shutterstock) When cities light up the night, it confuses the trees. In places where night-time light pollution is at its worst, trees burst into bloom a week earlier than trees rooted under dark skies, according to a 13-year study from researchers at the University of Exeter in the United Kingdom. Ringing in spring earlier in urban areas could have important ramifications for entire ecosystems, as changes in tree health send ripples throughout local food chains.

For trees, timing the budding process perfectly helps them take full advantage of bountiful summer sunlight to store energy, eventually shedding their foliage when the cost of hanging on to their leaves becomes greater than the energy they receive from them. Bursting buds too early risks frost damage, too late, and they miss out on valuable sunlight. It was already known that changes in temperature, such as those caused by "urban heat islands," can cause trees to bud at odd times. But the Exeter researchers wanted to determine if increasing levels of artificial, night-time light could also affect trees' phenological cycles. They turned to citizen scientists to answer the question, gathering location-tagged data on when trees began to bud between 1999 and 2011 from Nature's Calendar, a website that allows people to log seasonal events. They then cross-referenced these data with satellite images over the same time period to document night-time light levels across the UK while also accounting for changes caused by temperature changes.

Confused by the Light

Three of the four species researchers included in the study began budding earlier in bright areas compared to trees located underneath dark skies. The most extreme effect was seen in the European ash, which began to grow leaves a week earlier on average when exposed to higher levels of artificial light at night.

Scientists from the Light Pollution Science and Technology Institute in Italy recently released an updated light pollution map. Their analysis indicates only one-third of humanity can see the Milky Way from their home. (Credit: Fabio Falchi) To strengthen their findings, the researchers repeated their analysis, this time excluding urban areas from the dataset, and found that trees in the countryside were still affected by light pollution. Although the correlation wasn't as strong, it was still statistically significant, indicating that the trees are convinced to begin the arduous process of growing leaves even beyond the boundaries of a city. The researchers published their work Tuesday in the Proceedings of the Royal Society B on Tuesday. In the study, the team points to previous research on the relationship between oak trees and the hatching cycle of the winter moth, which matches its emergence from the egg to the budding process. If trees bud at the wrong time, the moths have a harder time surviving, leading to effects that can reverberate throughout the food chain. The trees' health can be affected by improperly-timed budding as well. Deciduous trees are working against the clock to gather enough energy to make it through the winter. If they fail to do so, or if their leaves are damaged by frost, it's harder for these species to cope with stressful events. Researchers say their study offers compelling evidence to continue diving deeper into the effects of artificial light, which continues to gobble up more of the planet's night sky.