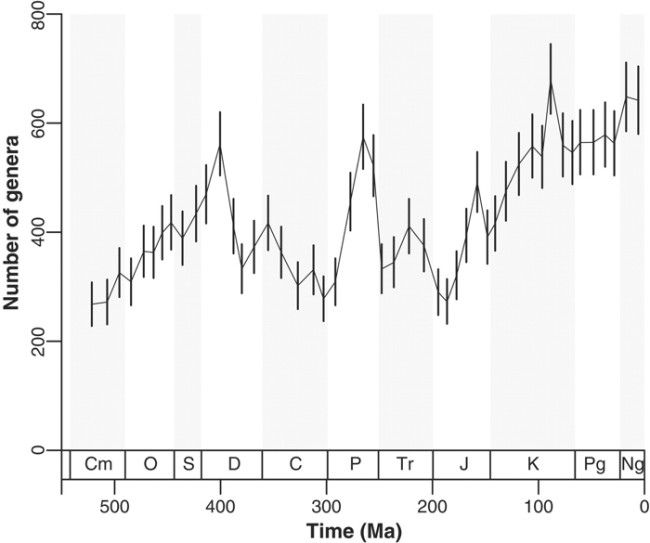 I have a fondness for graphs, especially ones that let you survey the sweep of life’s history in one glance. Here’s a new one, out today in the journal Science. It’s the latest look at the levels of biodiversity over the past half billion years. Scientists crunched the numbers on about 3.5 million fossils of ocean-dwelling invertebrates, using more detailed data than in previous surveys. (Some marine invertebrates leave fabulous heaps of fossils. Other species, like our own, are more delicate.) The horizontal axis marks time, and the vertical one marks the number of genera alive at any particular interval of about 10 million years. (Genera are groups of species. The genus Homo includes us, Neanderthals, and a few other extinct hominids, for example.) The world, according to this graph, is a more diverse place than it was 500 million years ago. Diversity rose, then dropped during mass extinctions, then rose again. Some of the sexiest mass extinctions, like the one that claimed the dinosaurs 65 million years ago, turn out not to have been that big of a deal for marine invertebrates. Previous versions of the graph had suggested that since that die-off there had been a tremendous exponential burst of diversity, but now things look different. The genera count was rising a lot faster before the dinosaurs disappeared than after. In fact, the overall rise of diversity has been quite modest. In the past, scientists have explained the rise of diversity as an exponential process, but if that's true, then something has been keeping it in check. Perhaps there isn't enough energy to let evolution run wild. The energy that comes from the sun gets dissipated as it flows through complicated food webs, and so it can't support lots of new genera. That’s why big-picture research on evolutionary biology is so important–unless you can step back, you may not be able to see the elephant in the room. [Image from Science magazine] [Update: Edited with help from the commenters]