By adjusting various parameters of sight, this high-power photoshop hints at what other animals might see from our perspective. 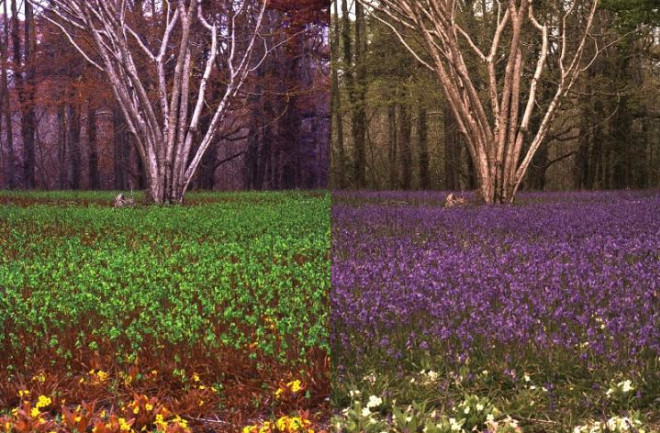 This is a field of bluebells from the perspective of a human (right) and a bee (left). (Credit: Jolyon Troscianko)

How other animals see the world is still something of a mystery — but a new software intends to make their perspective easier to picture.

Explained in a paper published in Methods in Ecology and Evolution, a research team has assembled a kind of extreme photoshop that lets users change image clarity, color and brightness to more closely resemble what other species might perceive.

The resulting pictures aren’t exact replicas of what other organisms see — we don’t yet know enough about how brains and eyes process the world, says paper co-author Cedric van den Berg, who studies animal vision at the University of Queensland in Australia. But with these three metrics, his team used the software to put together a suggestion of honeybee sight: a perspective filled with UV light that’s a little foggier than what we humans might see.

Though researchers around the world have analyzed particular aspects of sight in other species, collecting all that information for one experiment could be challenging, van den Berg says. So he and his team consulted with many animal vision experts to help reach some consensus about how vision might be different in some species. The team then built a software that lets users manipulate the color, brightness and clarity of an image to recreate various animals' vision.

Honeybees are part of the “AAA club of gold-standard animals, where the parameters you choose to do visual modeling are well known,” van den Berg says. The insects have been subject to a lot of dissections and other lab experiments that revealed some of how their sight works, so they were a natural fit for demonstrating the photoshop technique.

For example, in a photo of greenery and some flowers, beelike adjustments made the picture fuzzier and added neon hues approximating the UV light the insect sees. Bee vision is weaker than ours, in that they see less detail than we do from the same distance, van den Berg says. But when they get close to a flower, UV light — part of the light spectrum we can’t see — coming off petals creates more intricate patterns that act almost as little landing strips for the bee.

Again, this image alteration is just an approximation of the ways in which bee sight is different. It doesn’t quantify how much less precise bee vision is from 20 feet away — it just indicates that it is foggier. And we can’t see what colors UV light produces. Van den Berg hopes their photoshop will become more precise the more people use it or request new functions.

One area that could see improvement would be degree of brightness, as that changes depending on how close an animal is to an object, he says. And, since the system extrapolates for some animals, future experimentation will have to verify the proposed perspectives.

“It’s an idea of how you can, in a modular and dynamic way, do visual modeling and extract information from that,” van den Berg says.

Editor's Note: We originally had an error in the first photo caption, which has been corrected. The images are from the perspective of a human (right) and a bee (left).