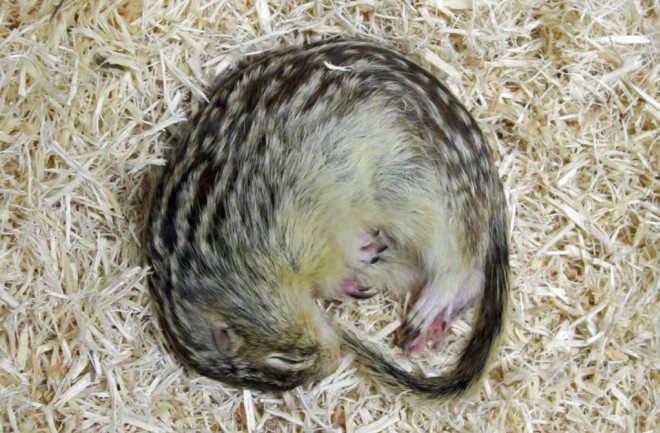 A hibernating ground squirrel curled up in Matt Andrews' lab. (Credit: Laboratory of M.T. Andrews) In a large walk-in freezer at the University of Minnesota, ground squirrels are quietly slumbering in the dark. As the ground thaws this spring, a new crop of animals around the northern hemisphere will emerge from a long winter’s slumber. At the same time, squirrels in Matt Andrews’ lab at the University of Minnesota will be waking up from their own hibernation. Andrews studies these hibernating squirrels, and the science may have applications for the health and well-being of astronauts, soldiers and anyone wishing to shed a few pounds. He's spent decades investigating what happens inside the animals’ bodies as they lay quietly in cold temperatures. His lab is filled with walk-in refrigerators that hold animals at a constant temperature – about 40 degrees Fahrenheit. “You can induce hibernation in the lab just by simulating conditions of winter: turning off the lights, removing food and setting the temperature a few degrees above freezing. As long as the animals have sufficient body fat, they’ll start hibernating,” says Andrews.

Can you spot the ground squirrel? (Credit: Laboratory of M.T. Andrews)

Hibernating animals aren't doing much at all, and that's what makes them fascinating. The thirteen-lined ground squirrels (also known as striped gophers) Andrews studies consume one-fiftieth the amount of oxygen they do when they're awake, and their heart rate can drop as low as 3-10 beats per minute, compared to 300-400 beats per minute when the animals are active. Though hibernation has been studied for decades, Andrews and others are using new molecular-based techniques to reach deep into the secrets of cold-induced sleep. One way hibernating squirrels beat the winter is to build up reserves of brown adipose fat, which Andrews calls nature’s fat-burning machine. “There probably is no more efficient way to burn fat than the way a hibernator does it in adipose tissue,” he says.

The animals burn the fat to generate heat when they’re not eating anything, as Andrews discovered and published recently in the journal PLOS One. In the study, Andrews and colleagues generated a transcriptome — a collection of all the gene readouts in a tissue — for the animals’ brown fat over the course of a year. Every 10 days or so, Andrews found, the animals woke up during hibernation and their metabolism kicked in. Then went back to sleep. Through other work examining protein expression, Andrews found that the animals move fat stores to their hearts and turn on special genes to make the fat burnable. The animals also avoid muscle atrophy, even though they aren't using their muscles. “If you were in bed for a week—not to mention in space for long-term travel—you’d have a severe atrophy of your muscles,” says Andrews.

Insights from squirrel hibernation (Credit: Laboratory of M.T. Andrews) The squirrels curl up into little balls for months at a time — typically not eating or moving much from October to April — and yet they don’t lose muscle tone. The evolutionary advantages of this adaptation makes sense: If an animal came out of its burrow and was wobbly, hawks or owls would promptly eat it. In order to survive long winters in burrows, the animals’ bodies have also adapted to very low oxygen delivery. Their hearts slow to 5-6 beats per minute, which is far below their summer activity. In humans, a commensurately low oxygen level or heart rate would lead to a stroke, but the squirrels get along just fine. Andrews and colleagues looked into the reasons why, and showed that the animals were depressing their metabolic rate. That metabolic rate reduction protects the heart, because with less fuel in the body, there are fewer free radicals and less damage to the organs. Andrews soon became interested in the human applications of the squirrels’ uncanny abilities.

Andrews and his team started working on therapies that mimic the animals’ blood composition while hibernating to fight hemorrhagic shock, which occurs when someone loses a lot of blood. It’s especially relevant to wartime scenarios, which is why these initial experiments were funded by the military, explained Andrews. Andrews patented a concentrated solution of ketones plus melatonin that, when combined, turned out to be a therapy for hemorrhagic shock, as published in the journal SHOCK. That’s because ketones can cross the blood-brain barrier without creating a buildup of lactic acid, which can damage organs. Using knowledge from the hibernators, Andrews says medics could extend the time before a person’s tissues and brain cells start dying after an injury. “If you could make demands of your tissue more like a hibernator’s, you could buy time, for example, to find a soldier on a mountain top, get them back to a medical facility and save his or her life,” he said. There’s another quirk of hibernators: they are more likely to live longer than animals that don’t hibernate. “Suspended animation seems to elongate their lifespan,” explained Andrews. He adds that the classic analog in non-hibernators is caloric restriction. When animals like worms are severely calorie restricted, they have lifespans that are much longer than animals that eat normally. All this means the work on squirrels as super-creatures will continue in the giant freezers of universities, as scientists continue to unravel the secrets of hibernation.