“It’s the kind of thing that, once you think about it, makes total sense." 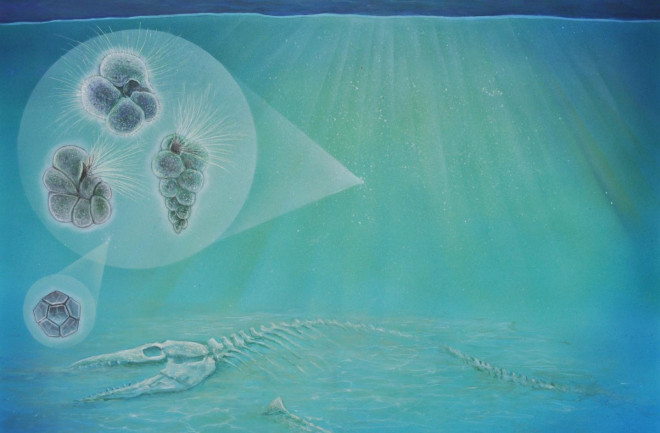 Life recolonized the Chicxulub impact crater so fast that bones from now-extinct animals, like this mosasaur, might not have fully decayed yet. (Credit: John Maisano, University of Texas Jackson School of Geosciences)

Around 66 million years ago, a city-sized space rock splashed into the Gulf of Mexico and killed 75 percent of life on Earth, including the dinosaurs. We all know that story. But — at least for the survivors — the aftermath might not have been as hellish as we thought.

New evidence shows that within just a few years of this Armageddon, small worm-like creatures were already burrowing in the silty seafloor at the crater. That’s according to research published Wednesday in the journal Nature. The results came after roughly two years of analyzing rock cores collected from the impact site.

“It was really surprising to us to find that (the aftermath) wasn't hostile to life at all,” says geologist Christopher Lowery of the University of Texas at Austin, who led the study. “The recovery was really quick.”

“I think that shows how short-lived these effects from the impact were,” he adds.

The team’s findings are surprising considering the conventional depictions of the so-called Cretaceous-Paleogene extinction, or K/Pg. Textbooks describe a global firestorm and toxic fallout, followed by years of photosynthesis-blocking particulate pollution, nuclear winter and climate change.

A study just last week even showed that increased carbon dioxide levels would have spiked global temps by a whopping 9 degrees Fahrenheit for perhaps 300,000 years. But the authors of this latest paper say their research doesn't necessarily contradict those findings. Rather, it shows that once the initial dust settled, the survivors almost instantly spread into new environments to take advantage of changed conditions and a lack of competition.

“The kill mechanisms were quick — there and then gone,” Lowery says. So, while the asteroid was devastating and climate change lasted for ages, life recovered because there wasn't anything terribly toxic to stop it. And even the shape of the crater, called Chicxulub, could've played a role. Instead of a perfect circle, it has more of a Pac-Man shape. One side opens up to deeper ocean water. That likely allowed nutrients to flow into the crater, providing a vital food supply for colonists.

Scientists say this species of plankton, Parvularugoglobigerina eugubina, was among the first new species to appear in the aftermath of the asteroid strike. This particular organism was discovered in a core drilled from the impact site in 2016. (Credit: Christopher Lowery, The University of Texas at Austin)

For years, scientists have debated this aftermath. Some evidence suggested a disproportionate die off with certain regions hit harder than others. And many believed that — perhaps because the asteroid came in at an angle — the northern hemisphere lost more species than the southern hemisphere.

But it was always hard to say why that might have happened. Perhaps the asteroid scattered toxic metals that polluted certain regions? Yet no traces of such metals were ever found. And, logically, if the worst damage happened close to the impact site, life should have recovered the slowest at the crater itself.

That’s not at all what scientists found. Instead, their findings imply life quickly recolonized ground zero and the rocks show robust ecosystems returning long before Earth’s climate recovered. “We have found a healthy recovery system within 30,000 years of the impact,” Lowery says. “I think that clearly puts to bed the idea of a distance effect.”

And he’s not alone in thinking this new evidence could help settle that long running debate. The study’s co-authors include many of the top names in the field — scientists who’d previously entertained the idea that the northern hemisphere had it worse. Instead, Lowery says their study lends support to an alternative idea that suggests the recovery — not the environmental effects — varied by region for more Darwinian reasons.

So, the way species interacted and competed in these recovering ecosystems could have dictated how long it took to recover. He’s recently submitted an additional research paper that could provide support for that idea.

Lowery and his colleagues, including Timothy Bralower of Pennsylvania State University, intensely studied a small chunk of the thousands of feet of core scientists collected from Chicxulub. The sediment in this section captures unimaginable destruction — fiery impact, mega-tsunamis, global debris fallout. But immediately after that, it shows the fine silt building slowly, as sediment falls to the ocean floor.

The team used simple fluid equations to calculate how long it takes for that sediment to settle. Similar layers were studied after the recent Haitian earthquake, giving them real world examples. And based on those calculations, the team says their burrowing microfossils conservatively appeared six years after the impact.

It’s also worth noting that scientists expected to find life at ground zero, they just didn’t expect it to look anything like this. Lowery and others thought they’d uncover the fossilized remains of volcanic hydrothermal vents that smoldered at the impact site for hundreds of thousands of years. And maybe those vents would’ve created a habitat for extreme lifeforms like those found elsewhere along the seafloor. (Another group of scientists is still working on that aspect and could have indeed found such an environment in other samples collected during the Chicxulub drilling expedition.)

But the lifeforms they published Wednesday aren’t extreme at all. Many are common kinds of tiny forams. In hindsight, the researchers say their results shouldn’t be that surprising. A vast volume of ocean water surrounded the massive impact crater, and its hydrothermal vents would only cover a small region. That leaves ample territory for more conventional lifeforms.

“It’s the kind of thing that, once you think about it, makes total sense,” he says. “It was a cool result.” Among the microfossils they found are tiny plankton whose ancestors eventually repopulated Earth’s oceans. They increase in abundance higher up in the rock layers as life fully recovers.

Interestingly, one species, called Guembelitria, lived exclusively in shallow marine waters during the days of the dinosaurs. But with other tiny plankton species wiped out, they quickly spread to new environments, including the deeper waters at the impact site. “It's the cockroach that survived,” Lowery says. “When it had it’s opportunity, it came out and dominated everywhere.”