Life On Earth: A Losing Game of Whack-A-Mole? 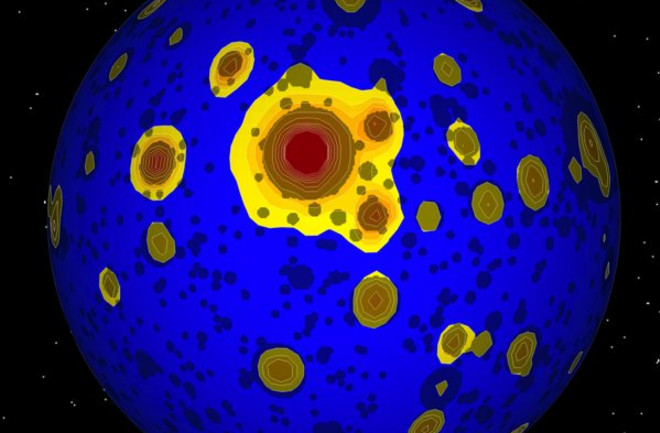 Beyond three billion years ago, the fossil record of life on Earth gets very patchy. At 3.4 billion years ago, there's fairly good evidence of mats of microbes. At 3.5 billion years, there are little globules that have been proposed to be bacteria but which some researchers consider just blobs of minerals. Earlier still there are shadowy isotopic hints--ratios of light and heavy carbon atoms that seem biological rather than volcanic--dating back as far as 3.8 billion years. These, too, are the subject of great debate. And before that, nothing. Seven hundred million years of nothing.

Does that mean that it took life 700 million years to get started on Earth? Is life just slow to get rolling? Or is there something special about the 3.8 billion-year mark? While the Earth sucks away most of its old crust with plate tectonics, the Moon and some planets record a frenzy of impacts in the early years of the Solar System 4.5 billion years ago. One particularly big impact 4.4 billion years ago probably produced the moon, followed by smaller impacts and capped off with one last intense bombardment about 3.9 billion years ago. So some researchers have suggested that these huge impacts sterilized the planet, and as soon as things calmed down, up popped life. A variation on this idea is the notion that life got started several times on the early Earth but was exterminated again and again until the blitz finally stopped.

Stephen Mojzsis, a University of Colorado geologist, and his colleagues have found some evidence in recent years that raised some questions about whether the early Earth was quite so hellish. Some tiny minerals dating back 4 billion years, for example, have a chemistry that suggests liquid water was on the surface of the planet at the time. So Mojzsis and Oleg Abramov put together a model of the early Earth to see just how bad things got.

According to their calculations, which they are publishing today in Nature, it wasn't that bad, at least if you're a microbe. Only 37% of the Earth's surface was sterilized by the impacts, and only 10% was heated up above 500 degrees C. The image above comes from their simulation of the Earth at the end of the Late Heavy Bombardment. Dark circles represent craters, and the colors represent hot (red) and cool (blue) pieces of crust. There was never a time when the entire habitable zone of the planet, from the surface of the oceans down to a few miles underground was wiped out. There was still a lot of real estate for creatures living in hydrothermal vents on the sea floor and even microbes in the deep ocean. In fact, the sort of microbes that thrive in hot springs would have gotten extra acreage, because the impacts would have heated up parts of the Earth's surface. So life might well have started not long after the Moon formed 4.4 billion years ago and muddled on through half a billion years of impacts.

In recent weeks I've been pondering the current wave of extinctions we're causing, and so I can't help projecting these results into the future. Animals and plants may seem like superior life-forms, but they're actually fairly delicate. Block out the sun for a year or turn the ocean acidic for a while, and things get ugly. But not even a storm of unimaginably vast impacts could disinfect Earth. No matter what beautiful birds or flowers Earth loses, I suspect the microbes will still be here.