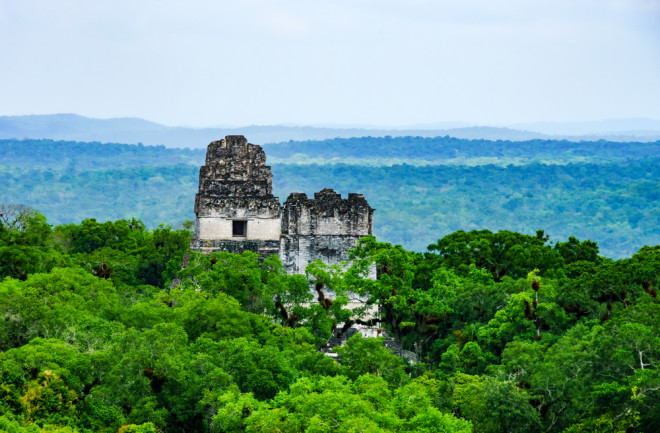 FLORES, Guatemala — From above, the vastness of the Guatemalan jungle stretches to the horizon in an unbroken swath of dense greenery. On the ground, the forest blends into a blur of foliage. The only sounds are the clamor of cicadas and howler monkeys.

But to step through the undergrowth in the northern Guatemalan lowlands is to walk the buried remnants of the ancient Maya civilization. The jungle hides fields, roads, canals and even whole settlements. And that civilization just got a whole lot bigger.

Thousands of previously hidden structures were recently uncovered in Central America thanks to a powerful technology known as LiDAR. And now, a new estimate of the Maya population based on those surveys suggests as many as 11 million people once lived throughout the region.

The LiDAR analysis also shows that Maya cities and surrounding settlements sprawl for miles around city centers, connected by a web of roads and dense grids of farm fields.

First published earlier this year, scientists report that a LiDAR survey of unprecedented size uncovered over 60,000 new structures across more than 800 square miles in the Petén region of northern Guatemala. Organized by cultural heritage group PACUNAM, and comprising numerous individual researchers and dig sites, the scans show a society of impressive scale and surprising heterogeneity.

From a slow-flying airplane above, millions of laser beams rain through the canopy. When they bounce back, the light pulses reveal the contours of the ground below, often down to a resolution of just a few feet. The technique lays bare the outlines of structures below, making it possible to map the land of the Maya like never before.

This fresh perspective is painting a picture of a complex culture with a high degree of societal organization and providing archaeologists with detailed information about where to dig that lays out a roadmap for years of future exploration.

For researchers like Ithaca College archaeologist and study co-author Thomas Garrison, the scans are revolutionizing the way research is conducted in the jungle. Before LiDAR, archaeologists and their teams would methodically criss-cross the uneven terrain, mapping out features of interest and making occasional exploratory digs. It was slow, demanding work; Garrison spent the spring recuperating from a hip transplant necessitated by years of fieldwork. Decades of work in the region had picked out a number of large cities and settlements scattered throughout the region, but they missed far more than they found.

Now, in camp, Garrison can pull up the LiDAR maps on his laptop and fly over a virtual representation of the surrounding landscape with a flick of his mouse. Structures dot the ground in every direction, the majority of them unknown to him even after a decade of work at his dig site.

A newly-documented site to the north of Tikal illustrates the range of features uncovered by LiDAR, as well as the complexity of interpreting them. The elongated building at top right is part of a so-called E Group complex and may pre-date 500 BCE. Across the valley, the large acropolis is likely a thousand years younger, though it may cover earlier constructions. Its broad access ramp overlaps an earlier causeway that runs between two eroded hilltop platforms, at the top and bottom of the image. Small houses and sunken garden enclosures cover the hillsides. (Credit: Luke Auld-Thomas/PACUNAM)

A newly-documented site to the north of Tikal illustrates the range of features uncovered by LiDAR, as well as the complexity of interpreting them. The elongated building at top right is part of a so-called E Group complex and may pre-date 500 BCE. Across the valley, the large acropolis is likely a thousand years younger, though it may cover earlier constructions. Its broad access ramp overlaps an earlier causeway that runs between two eroded hilltop platforms, at the top and bottom of the image. Small houses and sunken garden enclosures cover the hillsides. (Credit: Luke Auld-Thomas/PACUNAM)

In some areas near major cities like Tikal, population densities likely rose to hundreds of people per square mile. Over a thousand years ago, this remote jungle would have felt downright suburban.

“In certain parts of these areas … every little rise and hillock in the landscape has a family living on it, extending for miles outside of places like Tikal,” Garrison says. “When you step out of your house in the morning, you look out, you’re seeing all of your neighbors right there, everyone’s right on top of each other.”

It’s pushing estimates of the Maya population to over 10 million people at its Classic period height between 600 and 800 AD. However, not all researchers agree that we can reliably guess at the sizes of ancient populations. But, numbers aside, it’s clear that the Maya dominated this landscape during their heyday.

In addition to the thousands of housing platforms where thatched huts once stood, the scans also revealed vast networks of roads as well as over a hundred square miles of fields hacked into hillsides as terraces or erected in the middle of swamps and irrigated by a complex canal system. New and exciting defensive features emerged from the scans, too. The results were published Thursday in Science.

Examples of fields, roads and defensive fortifications had been found before, but because of the peephole nature of most digs, it wasn’t known whether such structures were unique. The LiDAR scans reveal that examples of ecosystem engineering and construction are widespread throughout Maya territory, something that hints at a society that’s more organized and hierarchical than previously thought.

“Defensive features, causeways, all of these things had to have been built in a coordinated way,” says Marcello Canuto, the director of the Middle American Research Institute at Tulane University and another co-author of the study. “So you start to have to contemplate the idea that there is a regional logic behind things as much as there is a local logic behind it.”

The sheer number of people living in and around cities is another indicator that Maya life was ordered to some degree, according to Garrison.

“In general it looks like, at least in the central and eastern part of the Petén in the Classic period, the settlement is so dense that this must have been an area where everyone knew exactly what their place was, what lands were theirs,” he says.

A view of Tikal contrasted with the city as seen through LiDAR scans. (Credit: Luke Auld-Thomas and Marcello A. Canuto/PACUNAM)

A view of Tikal contrasted with the city as seen through LiDAR scans. (Credit: Luke Auld-Thomas and Marcello A. Canuto/PACUNAM)

It didn’t look like that everywhere in the Maya territory, though. The scans also show a high degree of variation between different regions. Some are dominated by fields, while others are mostly urban. Some have a high concentration of defensive features, some have none at all. People clustered in some areas and spread out across others.

“There were urban areas, there were rural areas, there were areas in between, there were empty areas. It just looks and reads like the landscape of a complex society,” Canuto says. “Like any map that you see of any modern nation or any populated ancient context or modern context you’re going to have places where people congregate and people live more closely together and are more dense and places where they don’t.”

Those areas of population density don’t always map onto the areas that researchers had assumed were most important based on hieroglyphic texts, Garrison says. This opens up a significant number of areas for reinterpretation. Some areas, for example, could have been a kind of breadbasket for the region, producing food for nearby cities and settlements where there weren’t enough fields to support the number of people living there. Others may have produced specialized crops for trade with distant kingdoms.

The scans hint at totally new aspects of Maya society as well. Near to Garrison’s dig site of a decade, so near in fact, that he’d walked by it without realizing what was there, the LiDAR picked out a curious collection of structures and walls. Though excavations have just begun at the site, to Garrison’s practiced eye its function is clear: It was a fortress.

He’s named it La Cuernavilla, and the collection of buildings includes a moat, large wall, temple and palace, set atop an imposing ridgeline. A nearby watchtower was part of a network that spread throughout the Maya lowlands, ready to warn of impending attack. It’s the first time archaeologists have found Maya structures built expressly for warfare, and it implies an unexpected level of military engineering.

“It’s amazing. It’s so new. This is the kind of thing that no one ever suspected to show up,” says Michael Coe, a Yale University archaeologist and Maya scholar who’s not involved with the team. “It’s a major discovery.”

Garrison will be coming back to the site for years to plumb its secrets, as will other team members at their respective dig sites. The LiDAR scans, which comprise just a seventh of the area the researchers hope to eventually cover, have forever changed the practice of archaeology in Central America. It’s quietly revolutionary, too, for the way in which it’s brought together many disparate projects in Central America, Garrison says, and he credits PACUNAM with fostering a sense of cooperation among the researchers.

“The foundation are the ones that really coordinated this collaboration of all these authors on the article in a way that archaeologists don’t usually collaborate,” he says. “That was a critical thing here, was getting these different projects to cooperate in order to to reveal broader patterns. Too often, archaeologists really just focus on the sites they’re working at.”