Lidar Reveals a New City Hidden in the Cambodian Jungle 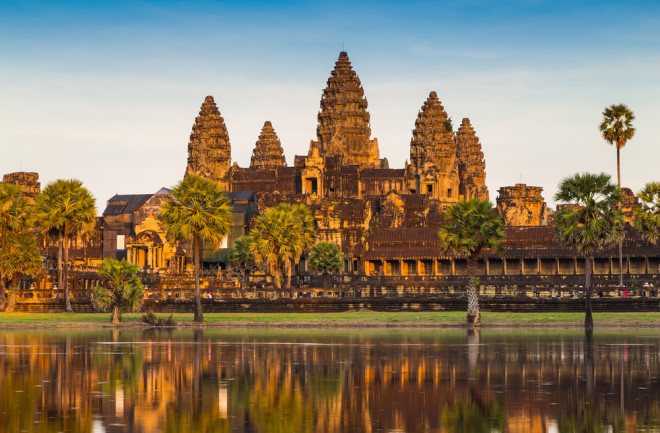 The iconic Angkor Wat temple rises from the jungle in modern-day Cambodia. (Credit: Bule Sky Studio/Shutterstock) A wide-ranging aerial study of archeological sites in Cambodia reveals a Khmer empire that was larger and more sophisticated than previously thought. By attaching a Lidar scanning system to helicopter skids, Damian Evans, the leader of the Cambodian Archaeological Lidar Initiative (CALI), peered beneath 734 square miles of dense rainforest canopy to map the topography of the ground beneath. He found dozens of new sites that were previously invisible to archaeologists, and significant evidence of large-scale human endeavors to shape the land. Evans discovered a network of roads between settlements, quarries and diverted rivers, in addition to swathes of ancient settlements that had previously eluded archaeologists. His work significantly expands the scale and emphasizes the interconnectedness of the ancient empire, which was the largest in the world at its height in the 12th century.

While the city of Angkor and its intricate temples have been subjected to intense archaeological scrutiny, much of the surrounding territory is covered by dense jungle that's not easy to navigate. Scattered temples and settlements have emerged over the course of decades of exploration, but the true scale of the site remains unknown. Part of the problem is that many of the buildings and structures were constructed with wood, which degrades quickly and leaves little in the way of evidence for researchers to unearth. However, even though the materials are gone, traces of human stewardship remain. Canals, roads and buildings leave their mark in the form of faint, but obviously artificial, outlines. Lidar is ideal for mapping these patterns, firing short bursts of visible and near-visible light that penetrate the rainforest canopy, revealing the structures beneath.

Mysterious mounds arranged in a regular grid discovered during the survey. (Credit: CALI)

Only Visible from Above

Evans' findings include an entire city that he had searched for over the course of the last decade, and which only appeared clearly when seen from the air. Located near the temple of Preah Kan, some 60 miles from the largest Khmer city, Angkor, the city is unrecognizable when seen from the ground, covered by centuries of jungle growth. Another city, which had been partially mapped in 2012, revealed its true size in the Lidar scans. That city, Mahendraparvata, dates to early in the Khmer empire, around the ninth century, and was shown to cover 15 to 20 square miles, most of which is consumed entirely by the jungle. His work was published Monday in the Journal of Archaeological Science.

The Preah Kan temple, as seen with Lidar from above. (Credit: CALI) Also of interest to Evans and other researchers are mysterious groups of mounds that show up clearly in scans from the air. Such mounds, as well as collections of other earthen structures, had been previously discovered in other locations, and are arranged in regular grids near water sources. Some appear to be spirals, while others are lines or domes. Seen from the ground, these mounds don't appear to be much at all, and excavations have turned up little of interest. Viewed from the air however, the fact that they were meaningful is easy to see, both because of their scale and ubiquity. Their purpose is still unknown. Evans' work also calls into question a popular theory regarding the decline of the Khmer empire around the 15th century following an invasion by Thai armies. Archaeologists believed that the Khmer people began a gradual exodus to more southern cities as they were pushed out of their lands further north. His study, however, shows that there were no major cities in the south, meaning that the retreating citizens had nowhere to go to. Where they went remains a mystery.