Lichens Survived A Mass Extinction, Scientists Find. But How Are They Doing Now? 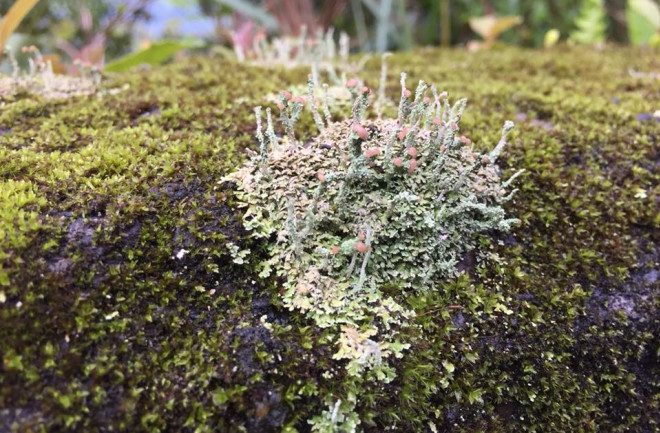 65 million years ago, a meteor catastrophically changed our planet’s biodiversity. All non-avian dinosaurs went extinct. By some estimates, 15,000 teragrams (that’s equal to the mass of 10 million redwood trees) of soot darkened the air. Lush and flowering plants that had proliferated around 40 million years earlier were decimated, deprived of life-giving sunlight. Surrounded by death, fungi flourished – their favorite food, dead bodies, was plentiful.

Other groups, like mammals, fared pretty well after the mass extinction as well, as they colonized niches recently vacated by dinosaurs and other creatures. But how a different group of organisms, the still-mysterious lichens, weathered the cataclysmic event wasn’t clear. Now, a new study finds that they may done quite well for themselves after the asteroid hit, and it’s another piece of evidence for a logical-if-you-think-about-it perspective: mass extinctions aren’t necessarily bad for all species.

Lichens can be thought of as the corals of the land. These colorful yet often overlooked organisms consist of algae (and sometimes bacteria) living together with fungi. The algae produce sugar and the fungi provide protection and nutrients. How algae initially moved in with fungi, though, is still unknown.

Another mystery is why lichens come in so many different shapes. There are three general categories of lichens: crustose which are small and carpet-like, foliose which have large, lettuce-like leaves, and fruticose which have more complex three-dimensional, often branch-like structures.

Thorsten Lumbsch, a lichenologist at the Field Museum in Chicago, has been fascinated by lichens ever since he was a teenager. Like a trick-or-treater extraordinaire, he has traveled with chisels, notebooks and a large pillowcase from forests near his childhood home in Germany to the slopes of Mt. Kilimanjaro in Kenya, amassing a collection of more than 30,000 samples of lichens.

Lumbsch was reading a paper on how environmental changes killed off dinosaurs that made him worry that his beloved lichens, or rather, their ancestors, had gone the way of their plant competitors – to dust. Skies blackened with ash following the asteroid’s impact may have prevented the lichens’ algae from photosynthesizing, spelling their end. But, if their fungal components were able to provide enough materials to sustain life, maybe the mass extinction was instead a new beginning.

To figure out the lichens’ fate, Lumbsch and his colleagues used two decades worth of publicly available lichen genomes. Computer models essentially calculated the results of thousands of paternity tests – comparing how similar certain “barcode” DNA regions were between sequences from different species of lichen through time – to predict when one species may have diverged from another.

Lumbsch, Huang and their colleagues got a surprising, and happy, result: around the time of the last mass extinction, lichens didn’t die, they diversified.

The resulting lichen family tree showed that many more species with larger 3-D, leaflike structures – ancestors more similar to today’s foliose and fruticose lichens –  rapidly evolved between 100 and 40 million years ago. Lichen sub-families diversified at different times, but more species appeared more quickly after the asteroid impact than before. Unexpectedly, the effect of the asteroid impact on lichens was very different than its effect on plants. The evolution of lichens post-dinosaur-extinction was more similar to how birds, frogs and small mammals were evolving around the same time.

Huang says that the mass extinction 65 million years ago was unique because it happened very suddenly. The terrestrial environment transformed and the climate warmed. “It gave a new opportunity for some lineages to survive,” he says. “Perhaps this always happens in our history.”

The researchers think the leafier lichens took advantage of this opportunity by adapting to occupy the habitats of plants that had died off. But other changes in temperature or precipitation, asteroid-related or otherwise, may have also played a big role in how many lichen species developed. In addition to explaining past evolution, better understanding this pattern will help lichenologists better predict how the 20,000+ identified and unidentified lichen species may fare today, when a rapid human-caused mass extinction is underway.

One Thing is Certain: Life Will Go On

Anne Pringle, a University of Wisconsin-Madison fungi expert not involved in the research, thinks the study is fantastic and very interesting. She adds that it is a “really exciting time to work with fungi because there is so much left to know.”

Lichens, unlike corals, were not included in the United Nations’ report estimating that one million species will likely go extinct in the next few decades. “It is difficult to say how the current mass extinction and climate change will affect lichens,” said Lumbsch, partly because “the worldwide distribution of lichens is very unknown. Any estimate of how many may become extinct would be speculative.”

Ultimately, the lichens’ history deepens our understanding of life as the Earth moves its way through another inflection point.

“When we say, ‘save the Earth,’ we really mean save the environment in which humans can live,” says Huang, “but life will go on, that always happens.”

The sixth mass extinction does not bode well for us, the top-of-the-food-chain contemporaries of the dinosaurs. But if history is to repeat itself, the lichens, at least, may be alright.