Let's Return the Cascade Volcanoes to Their Original Names

It is about time that we bring back the Native American names for the Cascade Range volcanoes. 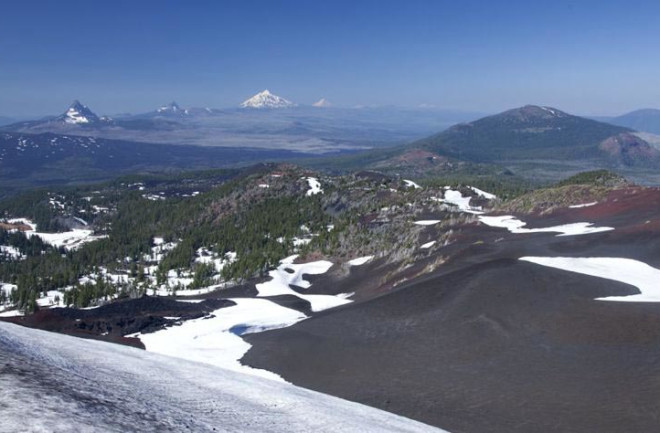 The Cascades of northern Oregon seen from Three Sisters. Credit: US Geological Survey

The names we know for all the Cascade Range volcanoes aren't the first. Every single major volcano from British Columbia to California was once known as something else and those names are closer to the original than those bestowed upon them by European explorers and settlers. The volcanoes were renamed without thought to the people who had been living in the area for thousands of years and it is about time we had a discussion about going back to those Native American names.

This isn't a new discussion in the United States. The tallest peak in the country was reverted to its native name of Denali from McKinley (which it was given only about 105 years ago). Imagine if someone moved into your home town and renamed everything after things significant to them (but not to you). That's what happened to much of the geography of our country.

So, why not change the name of the Cascade volcanoes to their native names? It is, of course, a little tricky. Many times the "original" names have been lost due to the genocide of Native Americans. Other times, different tribes had different names for the same volcano. Yet, almost all the big volcanoes in the Cascade Range have some indigenous name that can be linked to the edifice.

Even the range of volcanoes itself had a native name. The Cascades were known as Yamakiasham Yaina, or "Mountains of the Northern People". So, I updated the excellent US Geologic Survey infographic of the last 4,000 years of eruptions in the Cascades to reflect these names.

The last 4,000 years of volcanic eruptions along Yamakiasham Yaina (the Cascade Range). Updated 5/21 to reflect the recognized name of Mount St. Helens. Credit: US Geological Survey, modified by Erik Klemetti

Hopefully, recasting the volcanoes of Yamakiasham Yaina (the Cascades), although largely symbolic, can help with the restoration of lost culture from the Pacific Northwest. The names that we use today for these volcanoes have only been around a couple hundred years at the most, but their native names could go back thousands of years. Acknowledging that legacy and respecting the names given to these magnificent and powerful peaks would be a powerful symbol of how we think of American history.