Lessons from a 28 Year-Long Evolutionary Experiment 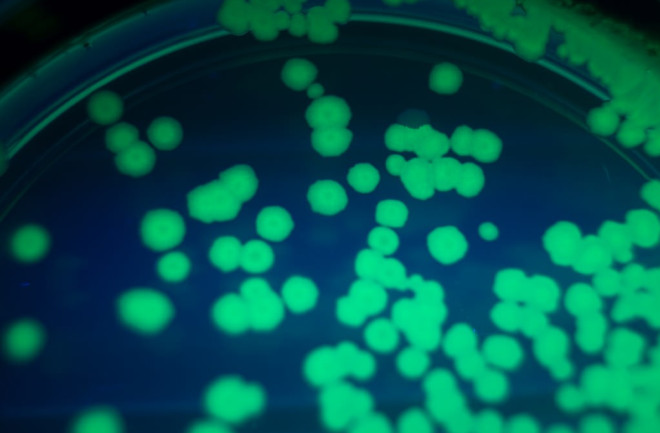 Growing E. coli on plates has been a staple of life in the Lenski lab for the last three decades. (Image: Flickr/2.5JIGEN.com) Every morning, a scientist walks into a lab in East Lansing, Michigan, grabs a pipette, and mixes two liquids. One is a cloudy brew of E. coli cells, billions of organisms thick; the other is a sterile solution with glucose and essential nutrients. One part A, 99 parts B, and back in the incubator it goes; over the next 24 hours, the cells will double nearly seven times, adapting to the broth in the process. And so it goes in the lab of Richard Lenski, a Professor of Microbial Ecology at Michigan State University, just as it has for the last 28 years. That’s more than 65,000 generations of E. coli, the “lab rat” of microbiology; the associated experiments have generated freezers’ worth of samples and burned through enough petri dishes to fill a warehouse. It started with 12 replicate populations of the same E. coli strain, each allowed to propagate on its own as it adapted to the glucose- and citrate-containing food source. “Is evolution this invariable slow and gradual process?” Lenski recalls wondering as he set up the first agar plates. “What about the repeatability – do things solve problems in the same way every time? Do you arrive at an end point that is optimal?” During a presentation at the International Symposium on Microbial Ecology in Montreal, Canada last week, Lenski shared some hard-earned answers. To see how effective adaptation to the chemical brew was, his team of researchers would pluck an organism from a given population after, say, 2,000 generations, and see how it competed with the original, unevolved strain. Perhaps unsurprisingly, the experimental microbe would dominate these head-to-head battles for resources – it had, after all, had a lot of practice and ample opportunity to hone new strategies. But what was intriguing was the math. After 2,000 generations, the evolved strains were about 30% more “fit” (a term that encapsulates evolutionary success in the form of reproduction rate). After 50,000 generations, the improvement had climbed to 80%. When Lenski’s team developed calculations to fit the data, they found that a power law worked better than an asymptotic equation. In other words, there doesn’t appear to be an upper limit on evolved fitness. It seems counterintuitive, the idea that there’s no such thing as an optimal evolutionary end point, but the numbers aren’t as crazy as you might imagine. The power law equation predicts that after a million years of evolution, E. coli’s doubling time will be 23 minutes. It’s fast, but not that fast, particularly given the current speed record of less than ten minutes held by

As Lenski notes, it’s “nowhere near where the bacteria have run up against biophysical limits in rates of replication.” When looking closer at the 12 different strains, Lenski found “very few examples of identical mutations if you look at the nucleotide level,” but “remarkable reproducibility” at the gene- and organism-scale. Many of the same genes are being altered – core regulatory genes involved in cell wall construction or DNA maintenance – but they’re changing in different ways. The data suggest that there are many routes toward improvement on the nucleotide scale, but the destination is environmentally determined. Lenski cautions that his experiment is “in no way an attempt to understand E. coli in the natural world,” yet the study does offer a baseline appreciation of how organisms may adapt to their environment. A few genes will be altered pretty substantially – frequently regulatory genes which control a number of subsidiary functions – while others will be unchanged, or even removed altogether. The twelve similarly evolved E. coli populations suggest that there may be many paths up the peak of evolutionary fitness, but the destination – a continually receding goalpost of optimality – is the same, always just out of reach.