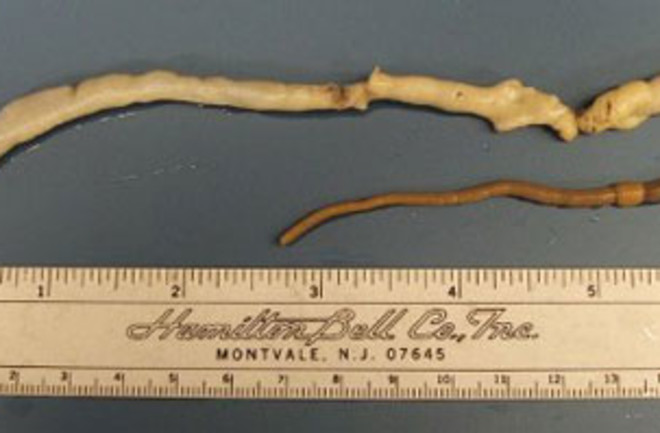 It's an earthworm so mysterious, people compare it to the Loch Ness Monster. Rarely sighted since the 1980's, the giant Palouse earthworm was said to grow almost three feet long, smell like lilies, and spit at predators. It was so elusive, that some even doubted its existence--but now, a team of conservationists from the University of Idaho has found several of these mysterious creatures in a prairie field. But what a let down it was. Contrary to popular claim, the earthworms did not smell like lilies or spit at their predators. They weren't even particularly giant, causing lead researcher Jodi Johnson-Maynard to remark:

"One of my colleagues suggested we rename it the 'larger than average Palouse earthworm'" [The Telegraph].

The team started combing the prairie region between Idaho and Washington state last summer in search of the Palouse earthworms. It was researcher Karl Umiker who eventually struck gold--or in this case, worm. Umiker used a tool called an electroshocker, in which electricity is passed through a number of electrodes that are stuck in the soil. Umiker was "shocking" a fragment of unploughed prairie when two giant earthworms emerged from the soil--a juvenile and an adult. The Palouse worms were said be abundant in the 19th century, but farming of the prairie land reduced their numbers drastically.

The worms were considered extinct until 2005, when Idaho graduate student Yaniria Sanchez-de Leon found a specimen near Albion, Wash. But that worm had been cut nearly in half as she was digging a hole [AP].

It's not clear whether the worms retrieved last month were part of tiny population of remaining worms, or whether they're considered rare simply because they live deep in the soil (down to 15 feet below the surface) and flee from the vibrations caused by digging scientists. When they were extracted from the soil, both worms were about seven inches long. Says Johnson-Maynard:

“But when we stretched it out and relaxed it, the adult earthworm got bigger.... It’s between 9 and 10 inches” [The New York Times].

That's still a far cry from the myth of 3-foot-long Palouse worms. Johnson-Maynard says that legend may have arisen from reports of one truly giant specimen recovered many years ago.

“Apparently some boy was swinging it in the air like a rope, and it stretched” [The New York Times].

Johnson-Maynard confirmed that the worms did not smell like lilies either, saying,

"I have a fairly sensitive nose, and I just can't smell the lily" [NPR].

The researchers have also seen no evidence of spitting. While the adult was killed in order to confirm whether it was indeed a Palouse earthworm, researchers are excited to still have the juvenile alive and in one piece. For now,

the captured juvenile is resting comfortably, Dr. Johnson-Maynard said, adding, “We have it in a cooler in soil with ice packs” [The New York Times].