Since the middle of February, Italy's Etna has been blasting lava over 5,000 feet into the skies of Sicily. 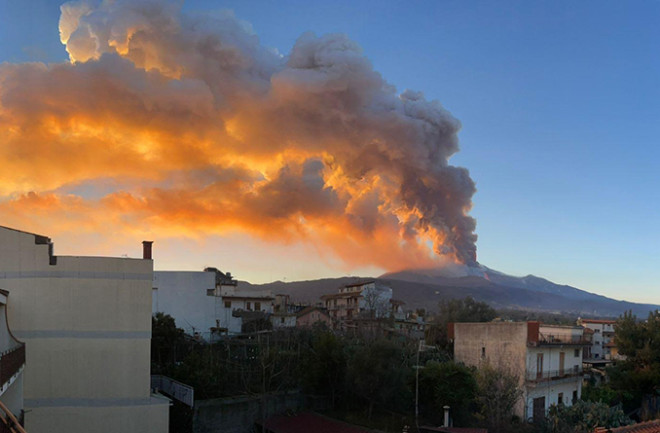 Etna's ash plume generated by a lava fountain at the summit on February 18, 2021. Credit: Emily Herrold, used by permission.

Etna, on the island of Sicily, is no stranger to spectacular eriptions. Every few years, it will produce a bout of paroxysms that can send lava fountaining thousands of feet into the sky. So far, 2021 is lining up to be one of those extremely busy years at the Italian volcanoes.

In the eyes of most volcanologists, Etna has been in a constant state of eruption since 2013. These eruptions might come in fits, but the restlessness associated with magma rising up into the volcano has not ceased over the last 8 years. If you look over the volcano's record of activity, it is pretty clear that Etna is one of the most active volcanoes on the planet (as is its neighbor, Stromboli).

Etna is most famous for creating long, snaking lava flows of basaltic andesite that sometimes reach the towns that have grown up on the sides of the volcano. On top of that, Etna also produces lava fountains, where the pressure of the lava escaping the many vents at the summit region of the volcano can create jets of lava droplets that have reached as tall as 6,500 feet (2,000 meters)! Even when it isn't creating these lava fountains, the Strombolian actiuvity at Etna can throw lava bombs over 3,000 feet (1 kilometer) from the crater.

Over much of February, the volcano has been oscillating between feeding lava flows that are crawling down its eastern slopes (see above) and spectacular lava fountains from its Southeast Crater. These lava flows have reached almost 1 mile (2 kilometers) down from the summit (see Sentinel-2 image above), but luckily have not been a hazard to people or property so far.

When these lava fountains really start churning out, ash can fall over the region and air traffic can be snarled or stopped coming into Catania. The lava fountains that can occured over the last few weeks have reached over 5,000 feet (1,600 meters) and if you are near enough to see one going, it sounds like a roaring jet engine (see the amazing INGV video above).

All this lava being erupted is also producing plumes of sulfur dioxide that spread over the Mediterranean near Italy. ESA's Sentinel-5 satellite captured (above) the cloud of sulfur dioxide on February 23 as it drifted northward towards Corsica.

This waxing and waning of activity at Etna will likely last into the near future. The volcano is feeling plenty of harmonic tremor according to INGV's Etna Observatory, the type of shaking that is associated with magma moving up into the volcano. There are many webcams pointed at Etna, both regular and infrared, so you can check out what the volcano from your own home.

Right now, the eruptions at Etna are either a spectacular show for the people near the volcano or a nuisance that rains ash and other volcanic debris on their homes and cars. In the end, that is likely the best kind of volcanic eruption for everyone.