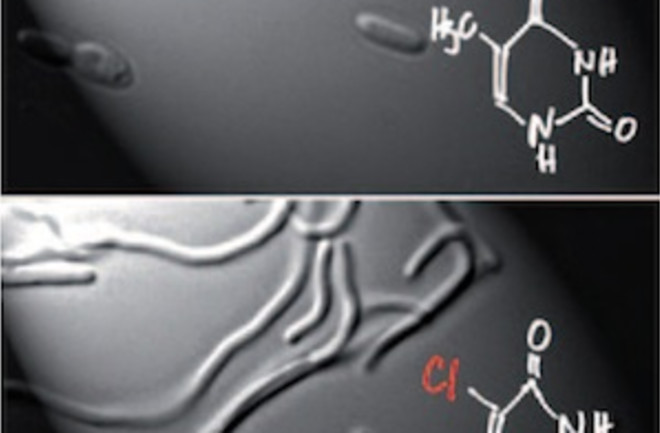 [Note: Some folks don't like the phrase "chlorine-based life." I welcome suggestions in the comments for a better shorthand descriptor]

Last year, a team of NASA-funded scientists claimed to have found bacteria that could use arsenic to build their DNA, making them unlike any form of life known on Earth. That didn't go over so well. (See my two pieces for Slate for a quick recap: #1, #2.) One unfortunate side-effect of the hullabaloo over arsenic life was that people were distracted from all the other research that's going on these days into weird biochemistry. Derek Lowe, a pharmaceutical chemist who writes the excellent blog In the Pipeline, draws our attention today to one such experiment, in which E. coli is evolving into a chlorine-based form of life. As I wrote in Microcosm, scientists have been contorting E. coli in all sorts of ways for years now to figure out what the limits of life are. Some researchers have rewritten its genetic code, for example, so that its DNA can encode proteins that include amino acids that are not used by any known organism. Others have been tinkering with the DNA itself. In all living things, DNA is naturally composed of four compounds, adenine, cytosine, guanine, and thymine. Thymine, shown in the upper left panel here, is a ring of carbon and nitrogen atoms, with oxygen and hydrogens atoms dangling off the sides. Since the 1970s, some scientists have tried to swap thymine for other molecules, such as the one show to the lower left here. This compound is called 5-chlorouracil, the "chloro-" referring to the chlorine marked here in red. No natural DNA contains chlorine. A team of German scientists recently published the details of an experiment that has taken them a long way towards E. coli that live only on chlorouracil. They didn't simply sit down and type out a new sequence for E. coli's genome--we just aren't smart enough to make such predictions. Instead, they harnessed evolution. The scientists fed a population of E. coli chlorouracil, supplementing their dieet with a little thymine to keep them from starving to death. Bacteria that picked up mutations that allowed them to use some chlorouracil instead of thymine were favored by natural selection. They lowered the thymine levels to increase the pressure on the bacteria to evolve more. After five months of this evolution, the E. coli underwent a noticeable change. For one thing, they changed shape. They started out in the normal capsule shapes in the top photo, turned into the worm-like shapes below, and then later became capsule-shaped again. The scientists also found that the bacteria were slurping up chlorouracil. Ninety percent of the thymine in their DNA was replaced by chlorouracil. As Lowe writes, the scientists found that the bacteria were still incorporating some thymine into their DNA through a pathway no one had discovered before (which just shows how marvelously mysterious E. coli remains after a century of intensive study). The scientists shut down this new pathway, and found that the bacteria still grew happily. But now they only had 1.5% thymine in their DNA. This E. coli is different from ordinary E. coli, with over a thousand mutations that enable it to take up chlorouracil. But it is not quite yet off the grid. If it is fed thymine and no chlorouracil, it can switch back to a conventional way of life. So now we'll see if scientists can further evolve the bacteria so that they can only live on chlorouracil, and starve on thymine. I checked in with Steven Benner, a chemist who has raised a lot of concerns about the arsenic-life research last year. What did he think of the new research? "It looks true," he said. Benner also pointed out that using chlorine in DNA is a pretty modest changed compared to what would have been required to substitute arsenic for phosphorus in the backbone of DNA. Swapping in chlorine doesn't change how the compound reacts with other compounds, doesn't change its size much, doesn't change its stability much, and so on. On the other hand, it appears to have the advantage of being real. [Update: Rosie Redfield, an outspoken critic of the arsenic-life research, just got back to me with nice things to say as well: "This looks quite solid to me (I read it quickly). The technology is nice, very appropriate for the project. No red flags at all."]