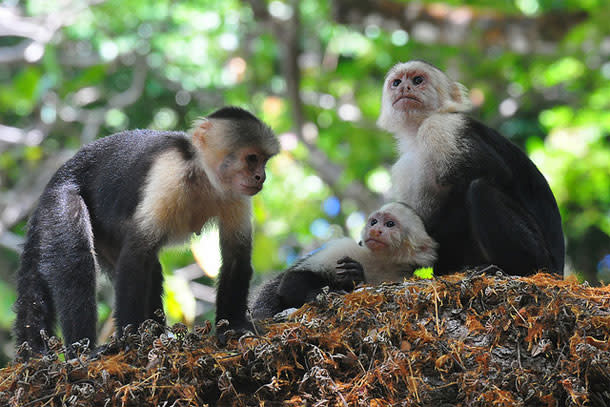 In the Battle of Rorke’s Drift, 150 or so British troops defended a mission station against thousands of Zulu warriors. At the Battle of Thermopylae, around 7,000 Greeks successfully held back a Persian army of hundreds of thousands for seven days. Human history has many examples of a small force defeating or holding their own against a much larger one. Among animals too, the underdogs often become the victors. One such example exists in the rainforests of Panama. There, capuchin monkeys live in large groups, each with its own territory. The monkeys often invade each other’s land. Numbers provide an obvious advantage in such conflicts, but small groups can often successfully defend their territory against big ones. Unlike human underdogs, they don’t win because of superior tactics or weapons. They win because their rivals are full of deserters. Margaret Crofoot from the Smithsonian Tropical Research Institute, and Ian Gilby from Duke University have spent many years studying wild white-faced capuchins on Barro Colorado Island in Panama. They’ve fitted individuals from six different groups with radio collars, so they can be easily tracked. [embed width="610"]http://youtu.be/b-6PkZn7EPw[/embed] In 2008, they showed that on the whole, larger groups are more likely to win fights than smaller ones. Each extra member increases the odds of victory by 10 percent. But these odds vary greatly depending on where the capuchins are. For every 100 metres that they move away from the centre of their territory, their odds of victory fall by 31 percent. If they invade another group’s patch, their distance from home can greatly outweigh the benefits of a large party. Now, Crofoot and Gilby have worked out why. They simulated incoming invasions with hidden speakers, which played recordings of rival capuchin groups of varying size. Oddly, they found that monkeys are more likely to run away from the speakers when they belonged to larger groups. Rather than taking strength in the fact that they outnumbered their foes, the monkeys realised that they could afford to cheat. In larger groups, each monkey has a proportionately smaller effect on the outcome of the fight, so each is more likely to desert the battle altogether. If enough do so, the big group can snatch defeat from the jaws of victory. In fact, Crofoot and Gilby found that for every extra group member, the odds that any individual will become a turncoat go up by 25 percent! As before, location matters: monkeys were almost twice as likely to flee at the edge of their territory as at its centre. When they decide whether to fight or flee, they factor in both where they are and how many friends they have. The upshot of this is that capuchin territories are remarkably stable. Even though competition is fierce, the monkeys have a natural home-field advantage. When they’re defending the centre of their home ranges, they’re better at converting any numerical advantage into victory. When they’re far from home, and encroaching into another group’s range, even a large force soon loses its advantage as its members flee. This also explains why large groups don’t simply sweep through the jungle, displacing or killing smaller ones on their way. Now, Crofoot and Gilby want to see if specific groups or other species of primates can overcome the problem of defection to better capitalise on the weight of numbers. The answers could tell us more about our own origins, especially if (as has been suggested) conflict between groups played a central role in our evolution. Such studies could also inform our behaviour today. The dilemma faced by large groups of monkeys is one that we should all be familiar with. We are facing a multitude of big problems, including a changing climate, a massive loss of other species, and plummeting levels of valuable resources. These problems affect such large groups of people that there are good odds that any one individual will bow out of the fight. If enough do so, defeat will be assured. Reference: Crofoot & Gilby. 2011. Cheating monkeys undermine group strength in enemy territory. PNAS http://dx.doi.org/10.1073/pnas.1115937109Image by KansasphotoMore on cheating: