What with the Transformers 3 filming going on near my office building, I've seen and heard a whole lot of explosions this week. Although the fireballs were real, the disaster was not. But some fiery catastrophes are all too real.

1. BP finally got a cap on the well, which may or may not have paused the leak. But another leak, which BP couldn't plug, revealed that:

a. BP has been doctoring some of the photos it releases.

b. CEO Tony Hayward doctored his resumé before BP hired him.

d. BP is at serious risk of bankruptcy.

2. Two exploded pipelines caused a large oil spill (relative to most, anyway) off the shore of:

3. Dick Cheney recently had surgery that left him without:

4. Experts are carefully evacuating hundreds of eggs containing super-adorable baby sea turtles from the shores of the Gulf. After hatching, the turtles are released off the eastern coast of Florida. The risk in this feel-good plan is that:

a. the oil will travel around Florida and get the turtles anyway.

b. the turtles' internal navigation systems, calibrated for the Gulf, will get them lost and/or eaten.

a. squirrels, due to a Manhattan rabies epidemic.

b. deer, to reduce car accidents.

c. frogs, due to noise pollution.

Answers are in the comments. And here are two guys who are totally unconcerned about potential disasters (unlike me, after realizing this was going on under my office window). 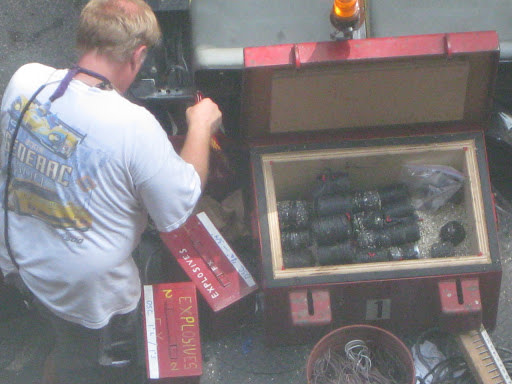 This dude is so relaxed, he's taking a nap. 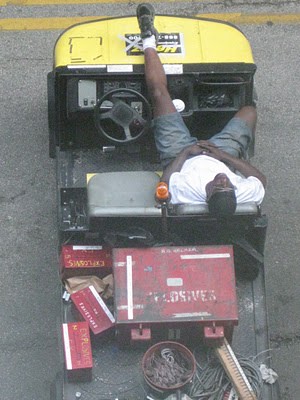