Krakatoa Is Still Active, and We Are Not Ready for the Tsunamis Another Eruption Would Generate

At some point in the future, Anak Krakatoa will erupt again, generating more tsunamis. 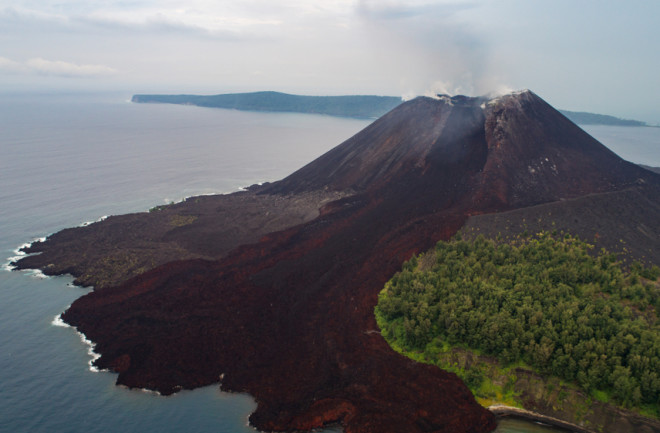 The August 1883 eruption of Krakatoa was one of the deadliest volcanic explosions in modern history. The volcano, found in the middle of the Sunda Strait in between two of Indonesia’s largest islands, was on a small island which disappeared almost overnight. The eruption was so loud it could be heard in Reunion, some 3,000 miles away.

As the volcano collapsed into the sea, it generated a tsunami 37m high – tall enough to submerge a six-story building. And as the wave raced along the shoreline of the Sunda Strait, it destroyed 300 towns and villages, and killed more than 36,000 people.

Nearly 45 years later, in 1927, a series of sporadic underwater eruptions meant part of the original volcano once again emerged above the sea, forming a new island named Anak Krakatoa, which means “Child of Krakatoa”. In December 2018, during another small eruption, one of Anak Krakatoa’s flanks collapsed into the ocean and the region’s shorelines were once again hit by a major tsunami. This time, 437 were left dead, nearly 32,000 were injured and more than 16,000 people were displaced.

Even though Anak Krakatoa had been active since June that year, local residents received no warning that a huge wave was about to hit. This is because Indonesia’s early warning system is based on ocean buoys that detect tsunamis induced by submarine earthquakes, such as those that struck on Boxing Day in 2004, in one of the most deadly natural disasters of all time.

But tsunamis caused by volcanic eruptions are rather different and, as they aren’t very common, scientists still don’t fully understand them. And Indonesia has no advanced early warning system in place for volcano-generated tsunamis.

At some point in the future, Anak Krakatoa will erupt again, generating more tsunamis. Since it is difficult to predict exactly which areas of the Sunda Strait will be affected, it is of paramount importance that residents in coastal villages are well aware of the danger.

An advanced early warning system could be installed. It would involve tide gauges to detect an increase in water levels, satellite imagery and drone mapping, and a tsunami numerical model run in real time. When this system triggered a warning, it would be fed direct to residents who live in the coastal belt. Until such a system is in place, it will be vital to get the local community involved in disaster risk management and education.

We Need to Tell People About the Risks

But preparing for future disasters isn’t just about building breakwaters or seawalls, though these defensive structures are clearly vital for preserving beaches for tourism and local businesses like fishing. It is also about educating people so that they feel psychologically healthier, more resilient and less anxious about facing the mega tsunamis of the future.

I have previously highlighted two examples of proactive community participation in disaster-prone villages in the UK and Japan. In both cases, residents know how to act in case of a natural disaster without depending on the authorities. It is certain that the decimation of the land and deaths could be reduced if the local communities are well prepared for natural disasters like tsunamis.

Following the December 2018 Anak Krakatoa tsunami, local researchers and I conducted a detailed field survey of the coastline of Lampung province, on the north side of the strait, and some of the smaller nearby islands. We found a lack of proper tsunami defence structures or any early warning system, and houses and businesses built very close to the coast with no buffer zone. We identified high ground where residents could run to in case of a tsunami and put up signs with evacuation routes.

During this survey, I conducted a series of focus group meetings with local residents and businesses in order to make the communities more resilient and reduce their anxiety about future mega tsunamis in the area. I developed a tsunami wave propagation model to replicate the 2018 tsunami and most plausible future tsunami events, and to identify the most vulnerable coastal stretches, such as the village of Kunjir on the Lampung mainland.

I also combined field survey results, numerical model outputs and published information to make some recommendations for local communities. I suggested active collaboration between government departments and local institutions on the issue, and the formation of disaster preparedness teams for every village in Southern Lampung. The planning criteria for development of infrastructure along the coasts should also be put under review, and there should be a trauma healing program for the victims of the 2018 Krakatoa tsunami.

We don’t know exactly when Krakatoa will next erupt, or if any future eruptions will match those of 1883 or even 2018. That’s a question for volcanologists. But we should do what we can to prepare for the worst.