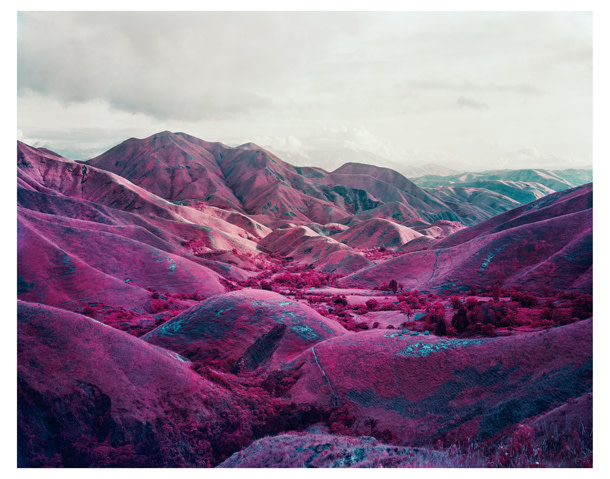 This image was shot on Kodak's satellite film Aerochrome, a discontinued Cold War-era infared color film initially designed for reconnaissance and camouflage detection. The film shows healthy foliage as magenta or red, highlighting camouflage as purple or blue. Aerochrome has had many uses; forestry, archeology, mining, irrigation studies and more. In his book, Infra, shot on the battlefields of the Democratic Republic of Congo, art photographer Richard Mosse uses it to throw down a challenge to the traditions of photojournalism. Mr. Mosse:

"I have always been drawn to working in places of conflict—sites more commonly the concern of journalists. While my work is documentary in spirit, I have struggled with the idea that documentary photography, regardless of the photographer’s concerns, arrives pre-loaded with an implicit assumption of advocacy. My work is not a performance of the ethical. I’m concerned less with conscience than with consciousness. And so I became enthralled by Aerochrome’s inflation of the documentary, mediating a tragic landscape through an invisible spectrum, disorienting me into a place of reflexivity and skepticism, into a place in consonance with my impenetrable, ghost-like subject."

In this landscape you see the mountains of South Kivu, where the rare minerals wolframite, cassiterite, and coltan are mined. Sometimes called "conflict minerals" because of the attendant human rights abuses and fighting, they are used in ubiquitous electronic products like cell phones and computers. "Nowhere to Run, 2010", Richard Mosse