Kipling Was Half-Right: Why the Big Cats Got Their Spots (Or Stripes) 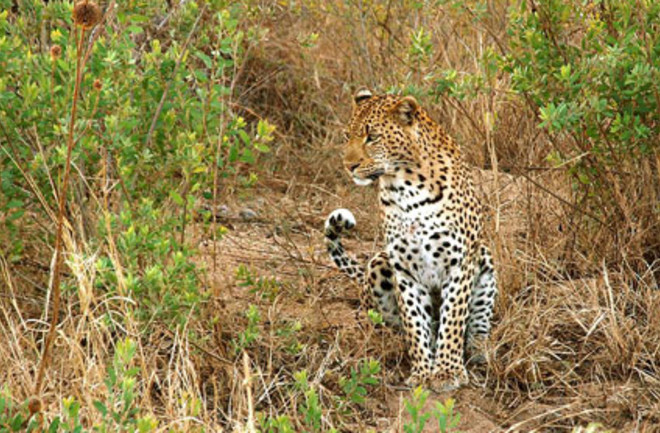 It's common wisdom that the big cats, like so many animals, evolved their particular look to blend into the background and skulk around undetected. But just how much are a cat's spots or stripes fine-tuned to its habitat? To find out, William Allen and colleagues dug into the markings in detail for a study in Proceedings of the Royal Society B and found that their specificity is even more connected to the species' home and lifestyle than scientists ever knew. The Allen team studied 35 different species of big cats, looking at their markings next to their habitat, history, and hunting patterns.

Dark-colored coats, which are common to leopards and jaguars but unknown to cheetahs, were tied to species that may roam both day and night and that occupy a wide variety of habitats. Solid-colored coats were linked to cats that are active during the day, usually walk on the ground and that live in open habitats, such as in deserts or on the plains. Stripes, on the other hand, remain somewhat of a mystery. "There aren't enough species of stripy cat to reliably make associations between stripes and potential drivers of stripyness," Allen explained. [Discovery News]

Indeed, if vertical stripes obfuscate a cat in the tall grass, as common sense might suggest, more cats would have evolved this marking. But of the cats Allen studied, only the tiger bore these stripes, and the stripes aren't necessarily correlated with its environment, he says. There are other interesting outliers, too, that show the markings question isn't as simple as "spots in forest, plain is the open." Cheetahs

, for instance, bear trademark spots despite living out in an open habitat that typically rewards a plain coat like a lion's. (Perhaps cheetahs are just so fast it doesn't matter.)

The team also found that the most irregularly marked species, including jaguars and leopards, tend to hunt at night, where their patterns can confuse the night vision of their prey. All of which suggests that protecting big cats means protecting their habitats as well. [ScienceNOW]

Of course, "How the Leopard Got His Spots" brings to mind the classic Rudyard Kipling tale

of that name. And despite being 74 years deceased, Kipling was half-right in his explanation.

Mr Allen said: "Rudyard Kipling was wrong by suggesting how leopard got their spots as the fingerprints of a man. "But he was right about the reason because they provide the perfect camouflage in a forest habitat with dappled light. The spotted pattern also allows them to have camouflage in a wider variety of habitats unlike, say, the black leopards who stand out in any environment other than dense rainforest and darkness." [The Telegraph]

, with amazing video Not Exactly Rocket Science: Leopards and elephants and rhinos, oh my

The Intersection: A Leopard in the Kalahari: Look Closer

DISCOVER: It's Not Easy Being Seen