Killer Cancer in the Cretaceous

Giant predatory dinosaurs were killers without equal, but they stood at the mercy of at least one foe: their own imperfect bodies. On October 23, a team of paleontologists and pathologists announced that they had discovered a massive, possibly lethal brain tumor in the fossilized skull of a Gorgosaurus, a 25-foot-long relative of Tyrannosaurus rex that lived 72 million years ago.

Courtesy of the Children's Museum of Indianapolis

A matrix of bone within this dinosaur's brain tumor allowed it to fossilize along with the rest of the animal's skeleton.

The tumor, possibly an unusual type of bone-forming cancer called an extraskeletal osteosarcoma, filled nearly the entire area formerly occupied by the cerebellum and brainstem and probably impaired the cerebrum, the part of the brain that controls thought and memory. “As the tumor grew, the dinosaur—a female perhaps three years old— would have forgotten where she left her last kill, and then she would have forgotten to go to the bathroom,” says paleontologist Peter Larson of the Black Hills Institute in Hill City, South Dakota. The animal’s remains were discovered by Cliff and Sandy Linster in 1997 near the town of Choteau in western Montana, and Larson and his colleagues have spent the past several years cleaning and preparing the bones for study. Larson came across an unusual two-inch-wide mass of dark material while cleaning the Gorgosaurus’s brain case. X-ray and electron-microscope analysis confirmed that the mass is a brain tumor—the first ever identified in a fossilized animal. 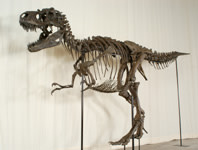 Gorgosaurs were smaller and quicker than their kin the T. rex. This young female, however, was crippled and likely killed in her prime by a rare brain tumor.

The tumor would also have put pressure on the dinosaur’s cerebellum and brain stem, which regulate motor function and other autonomic functions such as heart rate. “The tumor would have impaired mobility and affected the animal’s balance. She would have fallen down a lot,” says veterinary pathologist Rachel Reams of Eli Lilly & Company, who studied the fossil. Larson and his colleagues found ample evidence confirming that conclusion. Throughout the Gorgosaurus’s skeleton, the researchers saw signs of debilitating injuries: a smashed shoulder blade, a bad infection in the lower jaw, broken ribs, and a torn tendon in the left leg. “The leg eventually healed and became useful again, but for a while she would have been dragging that leg around,” Larson says. The creature never recovered from a badly broken right fibula, the small bone of the lower leg. The fracture had healed for barely two weeks at the time of the animal’s death. That was probably the last injury the she suffered, although scientists do not know exactly what killed her. “She was a very sad dinosaur,” says Larson.