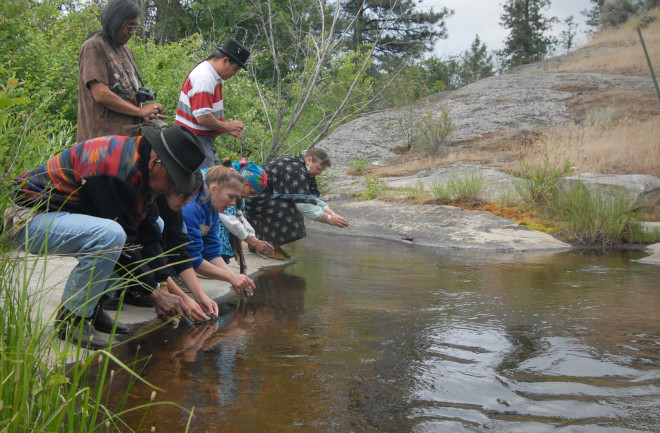 Members of the Confederated Colville tribe participate in the First Salmon Ceremony. The Colville were among five tribes who were involved in a lawsuit to obtain Kennewick Man's remains. (Credit: USDA/Flickr) Depending on who you talk to, Kennewick Man is either among the most important archaeological finds in North American history, or the desecrated body of a distant forebear known as “The Ancient One.” Kennewick Man’s remains have fueled a nearly two-decade-long showdown between science and cultural rights, and now those tensions are at the forefront once again. On Thursday, archaeologists who sequenced Kennewick Man’s genome announced that he is more closely related to modern Native Americans than any other population on the planet. The finding, scientifically speaking, appears to settle a fierce, decades-old debate among researchers regarding the man’s lineage.  But for the Pacific Northwest tribes demanding a proper burial for Kennewick Man, the results corroborate what they already knew from their oral traditions, and may renew their call for repatriation.

Boaters stumbled upon Kennewick Man’s remains by accident in 1996 during a race along the Columbia River in Washington State. Subsequent radiocarbon dating efforts revealed the remains were from the Holocene Era some 8,300 to 9,200 years ago – an incredibly rare and significant find. The aged Kennewick Man was nearly a complete skeleton, and scientists knew that these bones would be key to solving a longstanding mystery as to how, when and by whom North America was first settled. However, there was a catch. The United States Army Corps of Engineers maintained the land where Kennewick Man was found; furthermore, that particular stretch of the Columbia also fell within the borders of sacred homeland claimed by five Pacific Northwest Native American tribes. Shortly after scientists confirmed Kennewick Man’s age, the Army Corps took possession of the skeleton and ended further studies, a move that provided the spark for a prolonged battle in the courts.

In 1990 George W. Bush signed the Native American Graves Protection and Repatriation Act, as reparations for the disrespectful manner in which Native American remains were treated in the past. The law serves as a means for Native Americans to gain possession of cultural items – bones included – that once belonged to their ancestors if cultural affiliation, or a connection to their lineage, could be established. NAGPRA served as the legal umbrella for the Army Corps’ seizure of Kennewick Man. The government’s actions inspired a band of eight scientists, led by anthropologist Douglas Owsley, to take a big risk and sue the United States government to gain control of the remains for the sake of scientific inquiry. In 2000, the then-Secretary of the Interior Bruce Babbitt determined that the remains belonged to the tribe, and ordered their return. However, in 2002, the scales shifted in favor of the scientists. U.S. Magistrate John Jelderks ruled that the skeleton wasn't related to Native Americans based on its physical features, and therefore that NAGPRA didn’t apply in this case. The remains were turned over to the scientists, and the decision was upheld in appeals. The decision was a blow to the five tribes. “Scientists have dug up and studied American Indians for decades,” Umatilla tribe spokesperson Armand Minthorn wrote in 1996. “We view this practice as desecration of the body and a violation of our most deeply-held religious beliefs.”

Research published today marks the first time Kennewick Man's genetic ancestry has been successfully studied. Eske Willerslev and his team found that Kennewick Man’s genome most closely resembles that of modern Native American tribes, namely the Colville – the only tribe of the five that submitted DNA to be studied. “It’s very clear that the genome sequence shows that he is most closely related to contemporary Native Americans,” Willerslev said. Colville Tribe Business Council Chairman Jim Boyd says that the findings, published Thursday in the journal Nature, reaffirmed what the five tribes already knew. “We are not surprised by the findings, and I doubt that the other claimant tribes, or any tribal people are, for that matter,” Boyd told Discover. “Our oral traditions have time and time again been doubted by science, only to be proven true at a later date.”

A Bit of Irony

In an ironic twist, the 8-year court battle provided plenty of time for genetic sequencing technology to advance behind the scenes. The technique used to sequence Kennewick Man’s highly degraded DNA is only about five years old. Therefore scientists may have provided the five tribes the evidence they needed to establish their cultural affiliation to Kennewick Man. Had Kennewick Man been buried long ago, scientists wouldn’t have had the opportunity to investigate his lineage to this degree.

A stone projectile point in Kennewick Man's right hip helped research properly date his remains. (Credit: Chip Clark/Smithsonian Institution) “The reason why we can come to this conclusion is because the remains were left out for science, and the conclusion shows that he was Native American,” Willerslev said Wednesday during a press conference. “So, maybe, it all could have been different from the first place.” Scientists made it clear during the press conference that the research team did not receive any funding from the five tribes to conduct the study.

For now, the Army Corps remain in possession of Kennewick Man’s remains. John Kem, Brigadier General and Commanding General of Northwest Division of Army Corps of Engineers in Oregon, said his office will thoroughly explore next steps. “When we get the final study, I intend to give very clear direction to the staff for some of the steps needed to package this information with other things we know about Kennewick Man,” Kem said. “It’s not going to be an overnight thing. It will take time.” As far as the Colville tribe is concerned, the findings bring overdue resolution to a long dispute. Boyd said the five tribes will be meeting to formulate their next steps. “I just hope that these findings will satisfy the curiosities of folks enough that they will no longer interfere with our cultural practices, and allow us to freely exercise our religion as the United States Constitution guarantees,” Boyd said. For such a delicate negotiation between scientific progress and cultural rights, it seems likely there are many chapters yet to unfold in the story of Kennewick Man.