While seagulls might be feeding machines, they are far from mindless. 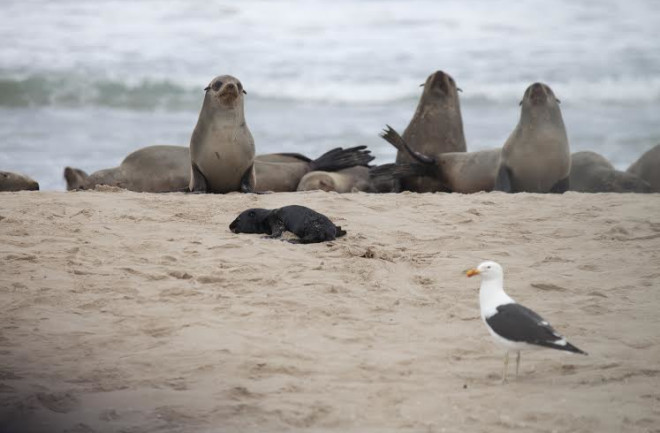 A kelp gull waits for an unfortunate pup to die. (Photo by Naude Dreyer)

I think it's fairly safe to say that gulls are among the least-loved birds in the world. These loud and annoying seabirds have a disturbing lack of fear of large mammals — including us — and a seemingly insatiable appetite, as any beach picnicker can attest.

It's no wonder that the creators of Finding Nemo portrayed them as mindless feeding machines, the only species in the movie to lack intellect and personality. But they were wrong in at least one respect: while seagulls might be feeding machines, they are far from mindless.

"What most would consider a pain in the ass, I would consider it brilliant," says Austin Gallagher, a scientist who generally studies large marine predators. "They can learn instantly and are fiercely competitive. Gulls are incredibly adaptive and intelligent birds. They are essentially the marine version of the crow, but with stronger wings to cope with coastal winds."

Gallagher has seen firsthand just how smart these animals can be when it comes to obtaining their next meal: last summer when he was in Namibia, he and his colleagues observed a bizarre feeding behavior that can be best described as ruthless.

"The beach where I was touring was riddled with seal carcasses, many with their eyes missing," he recalls. "Knowing that gulls are considered to be very adaptive, I knew there would be a chance for this amazing natural history ethogram to contribute to the scientific literature."

This baby seal doesn't stand a chance without its eyes — another meal for the birds. (Photo by Naude Dreyer)

Gallagher watched as kelp gulls (Larus dominicanus) snuck up on newborn or sleeping seal pups and quickly and viciously plucked out the animal's eyes, which they greedily consumed if they succeeded.

About half of the time, the gulls failed to complete their assault, either because the young seals fought them off or were saved by a more alert friend. The other half of the time, though, it took about two minutes for the birds to blind the unfortunate animals and gobble down their gooey prize.

Then the gulls would leave the seal the now-blinded baby or juvenile to die, returning to feast on its carcass. No one has ever described this peeper-plucking behavior in gulls before, but kelp gulls are known for similar macabre feeding strategies.

In Argentina, scientists observed the same species stripping flesh from the backs of southern right whales (Eubalena australis) when the obligate air-breathing marine mammals come up for a breath. The gulls are so persistent that the whales have changed how they surface to breathe just to avoid losing chunks to the winged devils that descend from the sky.

So gouging eyeballs seems quite in character for these aggressive birds. While their methods may seem cruel, the kelp gulls are actually demonstrating incredible adaptive ability and intelligence. "This is likely a learned behavior," Gallagher says. "It is a specialized process that puts the birds at risk, and there is clearly a benefit for the birds."

He and his colleagues suggest the feeding strategy developed in response to an increase in seal numbers in the area and thus increased conflict for resources. Nearly 25 years prior, scientists saw trouble brewing between the seals and the gulls, but they predicted that the birds would be ousted by burgeoning seal colonies — they didn't predict the kelp gulls' smart survival strategy.

"These animals have learned to feed on large marine mammals around the world," Gallagher notes. "To me that is super impressive."

Right now, the population of kelp gulls in Namibia is the only colony known to feed in this manner, but it's possible that other colonies also blind and kill potential prey, and no one has noticed. "

Ecology is all about patterns - and we can become better at predicting them by honing our skills as observers," says Gallagher. "This is fascinating stuff that deserves to be documented and shared with the public and scientific community. I think that when both of these groups hear about natural history observations they actually become better observers themselves and are more keen on detecting and documenting patterns."

Which reminds me — has anyone taken a good look at the seagulls off California lately? I took this photo back in 2014, and I now wonder how the baby elephant seal died...

Scavengers or ruthless killers? I never even thought to ask a year ago. (Photo by Christie Wilcox)