Kangaroos are the only known animals to use their tail like a fifth leg. 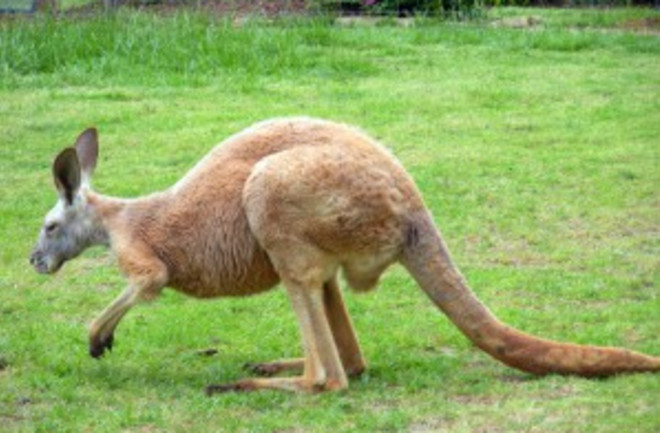 Photo: flickr/thethrillstheyyieldKangaroos are well known for using their massive hind legs to hop at high speeds, with their tails held high for balance. But here's something you probably never thought about: how do kangaroos get around when they're not in such a hurry? It's not easy to hop slowly, but neither is walking with two giant hind legs and two short arms. Enter these scientists, who use video analysis and force measurements on slowly-moving kangaroos to figure out how they do it. It turns out that the 'roos actually use their tails as a fifth leg when walking. In fact, the tail provides "as much propulsive force as the front and hind legs combined." This unique use of the tail has not previously been seen in other animals. Wallaby damned!The kangaroo's tail propels and powers pentapedal locomotion "When moving slowly, kangaroos plant their tail on the ground in sequence with their front and hind legs. To determine the tail's role in this ‘pentapedal’ gait, we measured the forces the tail exerts on the ground and calculated the mechanical power it generates. We found that the tail is responsible for as much propulsive force as the front and hind legs combined. It also generates almost exclusively positive mechanical power, performing as much mass-specific mechanical work as does a human leg during walking at the same speed. Kangaroos use their muscular tail to support, propel and power their pentapedal gait just like a leg."

Figure 1: Pentapedal locomotion in the red kangaroo. Kangaroos moved pentapedally across a force platform (checkered flooring). (a–d) A complete stride starting with contact of the front limbs (t = 0). Following the onset of front limb stance (a), the tail contacts the ground and the hind limbs begin swinging forward (b). After the hind limbs contact the ground again (c), the front limbs and then the tail swing forward (d). We measured the ground reaction forces (GRFs) generated by the pairs of limbs and tail over multiple strides (a–f). Tail forces were isolated after the other limbs no longer made contact with the force plate (f). The red, green, blue and black arrows represent force vectors associated with the front limbs, hind limbs, tail and reference body weight, respectively, for the represented trial. The checkered circles approximate centre of mass (COM) locations based on Alexander et al. [4] and are for illustrative purposes only.Related content: And the fluffiest-tail-in-the-world award goes to…Ground squirrels use rattlesnake perfume to scare away predators.Why do snakes flick their tongues? (Hint: it’s not just about smelling).