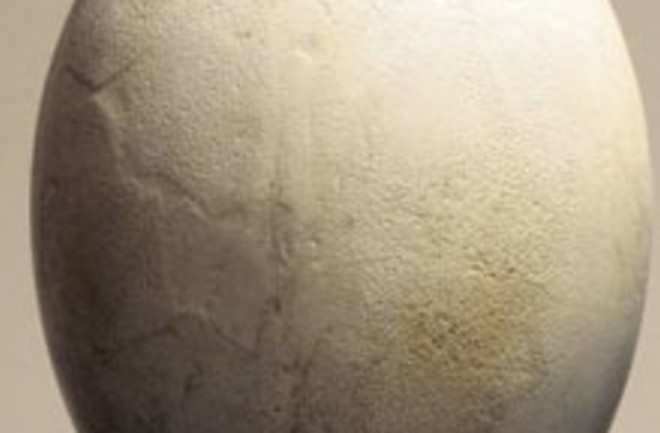 An international team of researchers has discovered how to extract DNA from fossilized bird eggs--including the eggshell of the enormous elephant bird that went extinct four centuries ago. In a research breakthrough, scientists were able to isolate DNA from the eggshells of not just the extinct giant moa bird from New Zealand, but also a 19,000-year-old emu from Australia and the extinct elephant bird of Madagascar. The elephant bird's egg is the largest known bird egg, with

160 times the volume of a chicken's egg [New Scientist].

The discovery of these birds' DNA could help scientists understand how they lived, and why they became extinct. The DNA was extracted from desiccated inner membranes in fossil eggshells, found in 13 locations in Australia, Madagascar and New Zealand [PhysOrg], and the

work was published in the

For years scientists have been trying to extract DNA from old eggshells without success, because their approach, scientists admit, was faulty.

Proceedings of the Royal Society B.

Charlotte Oskam and Michael Bunce of Murdoch University in Perth, Western Australia, who isolated the DNA, say researchers (including themselves) were using techniques designed to extract DNA from bone, not eggshells. They even threw out the most DNA-hardy bits of eggshell

[New Scientist]. Bunce explains that extracting DNA from bone involves sucking out the bone's calcium and discarding it.

In the new study, the researchers figured out that the DNA was stuck in the eggshell's calcium carbonate matrix--which they then proceeded to draw out. Because eggshells attract fewer bacteria than bone, researchers say their DNA samples from ancient eggs are less likely to be contaminated. With this new method of extracting bird DNA in hand, scientists are hopeful that they can piece together the story of how these ancient birds lived, evolved, and went extinct. For example, the elephant bird, which weighed about 900 pounds and stood ten feet tall, became extinct at the same time that humans colonized the island of Madagascar, but there have been no signs that the birds were hunted by humans. Says archaeologist Mike Parker Pearson: "

There's not even evidence that they ate the eggs -- even though each one could make omelets for 30 people" [BBC].

By studying the elephant bird's genetics, scientists can look for clues about the bird's physiology and diet that may help them understand what made the giant avian go the way of the dodo. But the researchers caution that so far, the new technique allows for the extraction of only a tiny amount of DNA--just 250 base pairs, the "rungs" on the ladder-like genetic code, and this is less than a fraction of one percent of the bird's genome

So can we expect these extinct birds to be brought back to life like the dinosaurs in Jurassic Park? Says Bunce:

"We can reassemble the genome to get an idea of what an extinct species looked like. But (resurrecting it) is still in the realm of science fiction. It's completely hypothetical, and frankly not a debate I really want to have."