Here is a fatal accident, etched in stone. This fossil comes from Solnhofen in Germany and dates back to the Jurassic period. On the left is

It’s a pterosaur – one of many flying reptiles that flapped through the skies while the dinosaurs ruled the land. Its arm bones, which supported its leathery wings, stretch out to the left of the image, while its long, stiff tail points downwards. On the right is Aspidorhynchus

, a predatory fish with a long, pointed snout. On first glance, you might think that the fish tried to eat the pterosaur. But Eberhard Frey and Helmut Tischlinger have been studying the fossil in detail, and they think otherwise. They analysed four slabs of Solnhofen limestone, each containing a Rhamphorhynchus entangled with an Aspidorhynchus. In each slab, one of the pterosaur’s wing bones lies within the jaws of the fish. In most of these cases, it’s hard to work out what happened. The pterosaur might well have been dead – perhaps it fell to the ocean and was grabbed by the fish. But one of the slabs – the one in the image above – provides an important clue. The Rhamphorhynchus has a small fish lodged in its throat. It had just caught its prey and had started to swallow it. This animal was very much alive when Aspidorhynchus snagged it. But not for long - Rhamphorhynchus was probably pulled underwater and drowned. But the encounter was fatal for Aspidorhynchus too. Its skull wasn’t flexible enough to cope with large prey, and the pterosaur was too big and bulky for it to swallow. 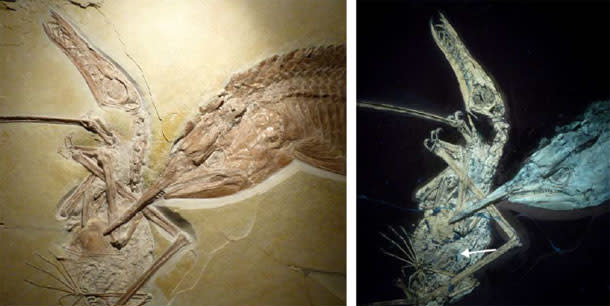 It probably couldn’t get rid of its victim either. The pterosaur’s left wing bones are distorted, while the rest of its skeleton is intact. Frey and Tischlinger think that the fish tried to shake off its unwanted morsel, clearly to no avail. Perhaps the tough fibres in Rhamphorhynchus’s wing snagged in Aspidorhynchus’stightly packed teeth. With neither party able to break free, both died. There’s no evidence that Aspidorhynchus ever actually tried to hunt Rhamphorhynchus. Even though several fossils show the two of them locked in a fatal embrace, not a single one shows the pterosaur’s bones inside the fish’s stomach. Instead, Frey and Tischlinger think that these fossils depict unfortunate but common accidents. Rhamphorhynchus was a fisherman, skimming over the water surface and grabbing fish from above. The commotion would have drawn Aspidorhynchus from below, for it probably targeted the same prey. All it had to do was to raise its head in the wrong place to snag the wing of its final meal. Reference: Frey & Tischlinger. 2012. The Late Jurassic Pterosaur Rhamphorhynchus, a Frequent Victim of the Ganoid Fish Aspidorhynchus? PLoS ONE http://dx.doi.org/10.1371/journal.pone.0031945