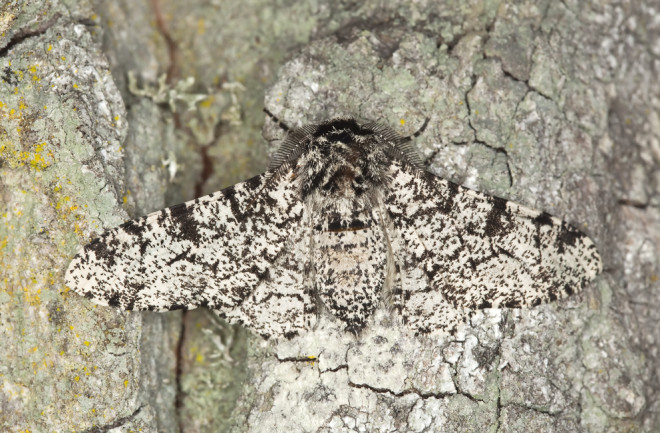 Your typical peppered moth. (Henrik Larsson/Shutterstock) The peppered moth is a poster species for evolution by natural selection. The typical peppered moth, Biston betularia, is white with black speckles, a color scheme that helps it hide from predators on light-colored tree bark. But during the Industrial Revolution in the United Kingdom, coal-fired factories caked buildings and trees in black soot. In 1848 the first entirely black peppered moth was identified, and by 1895, nearly 98 percent of peppered moths observed in Manchester were the black form, known as carbonaria. Darker moths, the thinking goes, were hidden from hungry birds in a blackened industrial landscape, and it was the black moths that lived to pass on their genes — natural selection in action.  Now, scientists from the University of Liverpool have pinpointed and dated the genetic mutation that caused peppered moths to join the dark side, adding a new wrinkle to an old classic. Their findings were published Wednesday in the journal Nature.

To identify the mutation responsible for the moths' transformation, researchers compared the DNA of light and dark moths in the lab, looking for differences that might reveal the carbonaria mutation. After a long search, they determined a transposon, inserted into the moth’s cortex gene, was responsible for the pigment change. A transposon, or a so-called “jumping gene,” is a chunk of DNA that can move to different parts of the genome and alter the expression of genes. Using a simulation-based statistical model that traces when a mutation event occurred, researchers concluded that the “jump” happened in 1819 — give or take 10 years. Researchers say it took another 30 years before the mutation was common enough in moth populations to be observed.

In a second, separate paper, published in parallel in the same journal, researchers from Cambridge and Sheffield universities demonstrated that the same cortex gene allows tropical Heliconius butterflies to mimic each other's vibrant colors and ward off predators. Rather than blending in, Heliconius butterflies use their wild colors as warning signals meant to broadcast their toxicity. It's a bit surprising that both groups' searches ended at the cortex gene, since the gene wasn't thought to play a role in pigmentation. In fruit flies, for example, the cortex gene helps control cell division. Both species have long stood as shining examples of Charles Darwin's theory of evolution, and now, thanks to these textbook species, researchers are starting to pin down the genetic switches that drive the process.