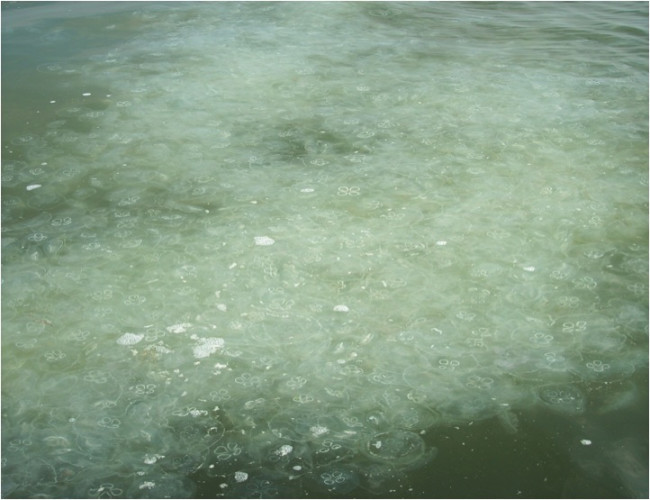 Despite its name, the Gulf of Mexico’s Dead Zone is full with life. This region stretches over 22,000 square kilometres, an area the size of Israel. Its waters are choked by a combination of fertiliser, sewage and industrial run-offs, flowing down from the businesses that line the Mississippi. These pollutants feed large blooms of algae that ultimately rob the water of oxygen, depriving it of the ability to support fish and other typical residents. Instead, the Dead Zone has become the dominion of jellyfish. Jellyfish congregate here in their thousands. Locals like moon jellies and sea nettles are joined by foreign travellers like the Australian spotted jellyfish. These gelatinous swarms stretch for miles, covering the ocean in a web of pulsating umbrellas and stinging tentacles. At their densest, you could scoop up a hundred jellies within a single cubic metre of water. They shut down beaches, fisheries, industries and ecosystems. The reasons for these swarms are unclear. By overfishing, we could have removed the jellies’ main competition for food. By sinking man-made debris like vehicles and rigs, we could have created habitats for their larvae. By raising the temperature of the oceans and pumping them with pollutants, we could have created warm, oxygen-poor waters that only they can thrive in. The jellyfish blooms are a natural phenomenon but marine biologists suspect that they are becoming increasingly common. Reports are constantly flooding in of unusual thick and large swarms, not just in the Gulf of Mexico, but all over the world from the Mediterranean to the Japanese coast. The worry is that we are witnessing a transition from an ocean full of scales, shells and flippers to one that’s ruled by jelly. Robert Condon from the Dauphin Island Sea Lab has found evidence to confirm those fears. By studying jellyfish blooms in Chesapeake Bay, he has found that the blooms instigate major changes in the ocean’s food webs. By tracing the flow of carbon through the web, Condon found that the jellies shunt this resource to bacteria, which in turn release it into the air. As a result, the oceans lose valuable food energy that would otherwise have gone to larger animals like fish. Jellyfish are often viewed as an energetic dead end. They voraciously eat plankton but few animals eat them. As a result, all the carbon that ends up in jellyfish is trapped, never travelling to other parts of the food web. But Condon found that this view is too simplistic. The jellies may not be easily eaten, but they do release large amount of organic matter into the surrounding water – a combination of mucus and the jellyfish version of excrement. This jellyfish waste contains 25 to 30 times more carbon than nitrogen; for comparison, most organic matter in the ocean has just 6 times more carbon than nitrogen. The sound of mucus and excrement may be unappetising to us, but these chemicals provide a delectable bonanza for bacteria. To measure the value of their excrement, Condon collected two species of jellyfish that bloom from an estuary in Chesapeake Bay – the stealthy sea walnut and the stinging sea nettle, both of which form problematic blooms worldwide. He incubated them in buckets of water, removed them, and measured the growth of bacteria in the waste-filled water. Within six to eight hours, the microbes had consumed anywhere from half to all of the jelly waste. This wouldn’t be a problem for the ecosystem if the bacteria were growing fat off the carbon in the jellyfish waste. They would then be eaten by plankton, which could provide more fuel for fish and other animals. But that’s not the case. Condon found that the bacteria weren’t growing or reproducing any faster in the jelly-filled waters; if anything, they grew more slowly. Instead, they quickly metabolised any extra carbon into carbon dioxide, releasing it into the atmosphere. Rather than channelling the carbon up the food web, the bacteria were rerouting it away from the ocean entirely in what Condon describes as the “jelly carbon shunt”. The shunt is a conveyor belt that ensures the jellyfish’s dominance, by drastically shifting the flow of energy around the ocean. Condon thinks that its harmful effects will only get worse as ocean temperatures continue to rise. After all, jellyfish thrive in warmer waters. For example, in Chesapeake Bay, spring temperatures have gone up over the last 40 years, and the sea walnut has reacted by blooming earlier in the year and more persistently. In the open ocean, things are less clear – at least these waters are home to predators like turtles and swordfish that can actually eat jellyfish. Either way, with jellyfish blooms predicted to become bigger and more common, Condon’s results foretell a worrying future for our seas. Reference: Condon, Steinberg, del Giorgio, Bouvier, Bronk, Graham & Ducklow. 2011. Jellyfish blooms result in a major microbial respiratory sink of carbon in marine systems. PNAS http://dx.doi.org/10.1073/pnas.1015782108