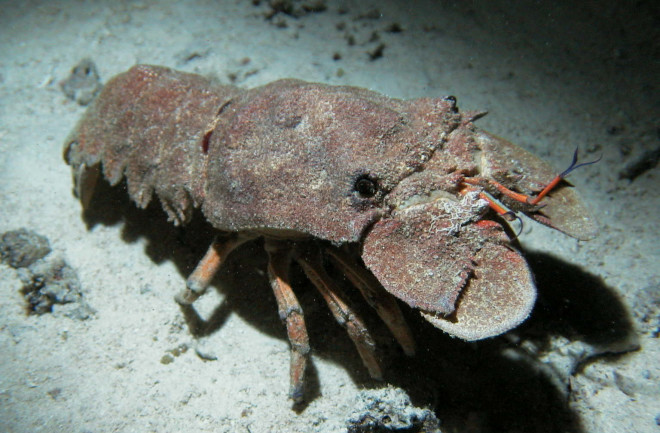 A slipper lobster, a close relative of smooth fan lobsters. (Credit: Peter Koelbl/Wikimedia Commons) Life as a young smooth fan lobster is pretty easy. As a phyllosoma, another word for lobster larvae, the crustaceans like to kick back and relax, hitching rides on Moon jellyfish instead of using their own legs to get around. What's more, they never really have to get off because they also eat the jellyfish. It's like taking an Uber everywhere, only the car is made out of chocolate. But how do lobsters survive on their deadly hosts? The answer could help make it easier to keep lobster on the menu.

Get Off My Tentacles

The young lobsters eat their unwilling chauffeurs from bottom to top, which must be something of a bummer for the jellyfish, because they have been shown to be capable of the same reverse aging process as another jelly species, making them seemingly ageless. After the smooth fan lobsters are done with their once-immortal meal, they are presumably forced to either walk for themselves or find another moveable feast. To fight back, jellyfish fling copious quantities of mucus at the phyllosoma — fire enough mucus, and the lobsters will develop potentially fatal bacterial infections. But in an evolutionary tit-for-tat, these lobsters have a means of counteracting the snotty assault: they use one of their five pairs of legs like windshield wipers to constantly clear the mucus from their bodies. Living on a jellyfish comes with a host of difficulties, however, not least of which are the venomous tentacles used to ensnare and paralyze fish. Lobsters are covered in overlapping chitinous scales that protect their exteriors from stings, but their digestive tracts aren't completely covered. Moon jellyfish have tiny explosive tubules inside of their tentacles that shoot out and deliver a load of deadly toxin to their prey. The phyllosoma need to neutralize this mechanism in some way if they want to enjoy a tasty jellyfish tentacle.

In order to figure out how smooth fan lobsters put up with their venomous cuisine, researchers from Hiroshima University fed a small population of phyllosoma a diet of their favorite meal. They then collected the end result from the tank and analyzed the feces. They found that all of the stinging cells were wrapped up tight inside a protective coating called a peritrophic membrane that prevented the explosive tubules from reaching their bodies. Such membranes are common in the digestive systems of crustaceans and insects, although they aren't usually used in quite this fashion. They also injected the lobsters with venom directly to make sure that they weren't immune to it — they weren't — although the venom was from a different species because they couldn't get enough from the Moon jellyfish, they say. They published their research Thursday in the journal Plankton and Benthos Research.

Figuring out what lobsters like to eat and how they do it is of interest to both the researchers studying them and fisherman looking to increase their catches. Despite lobsters' popularity at dinner time, no one has figured out an efficient way to breed them commercially. That's why Maine is still the best place to go for a good lobster dinner — the ocean is the only place we can get them, and they don't transport well. In captivity, lobsters turn quickly to cannibalism, which is why their deadly claws are always banded when you see them in restaurants. It also takes about five years for a lobster to grow to maturity, meaning that any breeding program would take years to turn a profit. To solve the problem, and satiate our collective yearning for a good lobster dinner, researchers are trying to figure out more about the lobster life cycle, some portions of which are still mysterious. Some species of lobster go through as many as ten stages before becoming an adult. Smooth fan lobsters spend the majority of their adolescence as the tiny, transparent phyllosoma, riding around on jellyfish and snacking their hearts out. The mechanics of the process are not well understood, however, and the Japanese researchers are hoping to slowly elucidate each stage of the journey, even if it means sifting through lobster poop.