Jeans: Stylish, Classic, And a Decent Defense Against Rattlesnake Bites 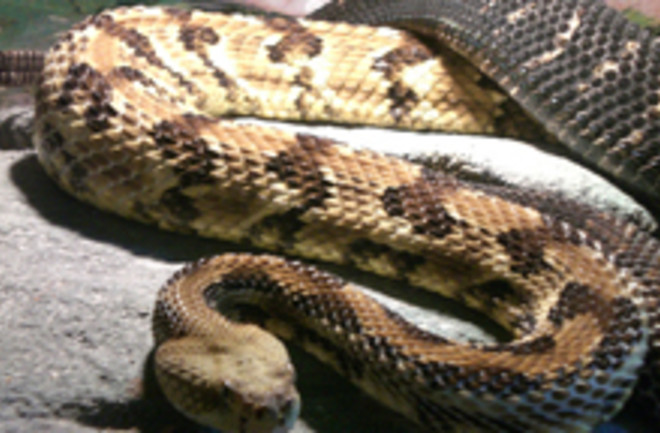 Relax, Indiana Jones. Snakes aren't so scary... as long as you're wearing a good pair of jeans. According to research done by scientists in California, denim provides more than classic American fashion statement. While this may seem somewhat obvious, the researchers are happy to announce that covering your legs with jeans doesn't just reduce the amount of venom that a snakebite can inject into your system—it reduces it by a lot. From Reuters:

Drs. Shelton S. Herbert and William K. Hayes used latex gloves filled with saline to simulate a human appendage, then exposed the gloves to bites from small and large southern Pacific rattlesnakes. Some of the latex "limbs" were covered in a layer of denim.

The researchers found that compared with the jeans-less gloves, those covered in denim absorbed about two-thirds less venom from the rattlesnake bites. Instead, a high proportion of the venom "spilled harmlessly" onto the denim, the researchers report in the Annals of Emergency Medicine.

Two things come to mind as a result of this study. One: Yes, scientists will study anything. And two: If you're planning to hike in rattlesnake country, forget about working on your leg tan and just throw on those old Levi's. Come to think of it, perhaps this explains President Obama wearing those thick, high-waisted "mom jeans"

to throw out the first pitch at this summer's Major League Baseball All-Star Game. The St. Louis Cardinals' home stadium is presumably free of venomous snakes, but the Secret Service takes nothing for granted. Related Content: Discoblog: Snake with Foot, Beaten to Death with Shoe

DISCOVER: Is That a Gun in Your Pocket, Or Are You a Size 2?