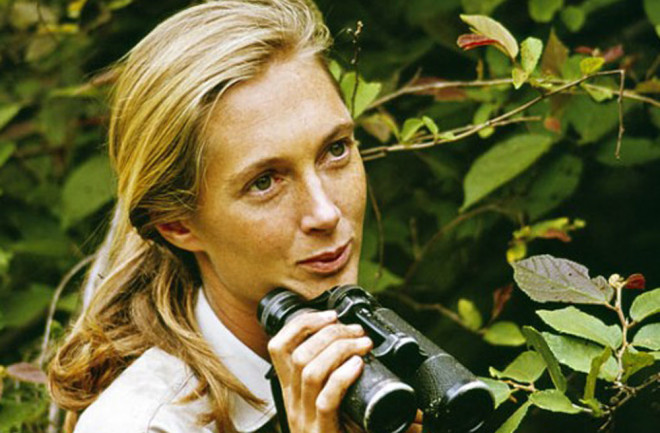 Jane Goodall in Gombe Stream National Park, circa 1965. (Credit: The Jane Goodall Institute) Jane Goodall has been a flashpoint in science circles. Was her years-long study of chimpanzees in the Gombe Stream National Park in Tanzania real science? Or was it too subjective to have scientific value? The questions arise anew in the wake of a new documentary, Jane, that looks back at Goodall’s career and how she became a household name in the 1960s. In 1965, her CBS special Miss Goodall and the Wild Chimpanzees was watched by 25 million people in North America. A paper published last month in Scientific Data on an aspect of her research has also added to the conversation. Goodall was a young, photogenic woman with a refined English accent, which she used to full effect in the voiceovers of her documentaries. Perhaps those factors coupled with her having no Ph.D or even a college degree meant her primate discoveries would not be taken seriously by many scientists. But though she lacked scientific training, she was still making important discoveries. Her 1960s work revealed for the first time that creatures other than humans make and use tools. Goodall documented a chimp stripping a branch of leaves and using it to plumb for termites. She also documented chimps eating meat, ending the long-held belief that they were vegetarians. But her manner of observation shook more than a few academic ivory towers. Rather than use numbers to identify animals being studied, she made up silly names for the chimps she was studying. Among them were Flo, Fifi, Mr. McGregor and David Graybeard, the chimp who dipped for termites with a branch. Goodall went on to earn a PhD at Cambridge University, but the shadow of scientific inauthenticity continued to stalk her. She is now 83 and proudly identifies as an activist against animal cruelty rather than as a primatologist. And she holds fast to the notion that chimpanzees and other animals have personalities. In a lecture at the University of Missouri in 2014, Goodall said, “Fortunately, I had a fantastic teacher when I was a child. That teacher was my dog, Rusty. You cannot share your life in a meaningful way with an animal and not know that animals have personalities, minds and feelings.” Though that sounds pretty unscientific, she wasn’t the first researcher to attribute personality to animals. In the 1930s and '40s, a number of ethologists were exploring this. In her book Through a Window: My 30 Years with the Chimpanzees of Gombe, Goodall wrote that some researchers were aware of behavioral differences in individual animals, but the findings were ignored by the science gatekeepers. Last month, Goodall’s work on primate personality got a huge validation from the Scientific Datapaper. Researchers conducted personality research on 128 chimps in Gombe, and also updated the research on 24 other chimps that were studied in 1973. The paper says that the animals displayed varying degrees of trust, timidity, depression, aggression and gregariousness. In other words, personality. Most examinations were conducted at the Jane Goodall Institute’s Education Centre in Kigoma, Tanzania. “I think it vindicates her going against the scientific grain of the day and to her being open to the possibility that chimpanzees have personalities,” said Alexander Weiss, a senior lecturer at the University of Edinburgh and lead author of the study. “I think it also vindicates her approach to treating the chimpanzees as individuals.” Attributing personality to primates is generally accepted today as scientifically valid. But what about non-primates? “It definitely is not limited to primates,” Weiss said. “There are studies on personality in fish, insects, reptiles and certainly other mammals. I have already studied personality in several species of nonhuman primates,” he continued, saying his studies include monkeys, dogs and fallow deer.