James Joyce's Words Come To Life, And Are Promptly Desecrated 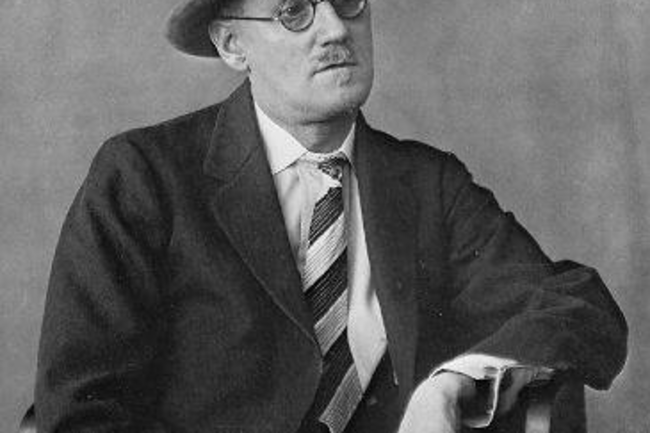 This old English major's heart is warmed by the news that the new synthetic cell carries a line from James Joyce, inscribed in its DNA: "To live, to err, to fall, to triumph, to recreate life out of life." What would Joyce have thought if someone had told him that one day the synthesized genome of a goat pathogen would carry his words? I would hope that whoever told him would make sure that he did not think this moment marked his literary immortality. In fact, his deathless prose is probably being desecrated by the relentless erosion of evolution right now. The scientists who produced the new synthetic cell copied the genome of a microbe, letter for letter, and then inserted the synthetic version into a host cell. To determine that their experiment worked, they needed a way to tell the genomes of their synthetic cells from the natural genomes that were their model. So they inserted "watermarks" into the artificial genome. These sequences of DNA (which spelled out the work of Joyce and others through the genetic code) sit in non-coding regions of the microbe's DNA. As a result, these watermarks cannot disrupt any essential protein-coding genes or stretches of DNA that are vital for switching genes on and off. It turns out that the genome of the synthetic cell is not identical to its original, even if you ignore the watermarks. Mutations slipped into its sequence during its synthesis. Yet those mutations caused no harm to the microbe, presumably because they didn't disrupt an essential function encoded in its DNA. Once the synthetic cell came to life and began to grow and divide, it copied its entire DNA, including Joyce's words. But as lovely as those words may be, and as important as they may have been to the scientists during their experiment, they mean nothing to the microbe. Every time an organism replicates, each spot in its DNA has a tiny chance of mutating. In the growing colony of synthetic cells, now numbering in the billions, it's almost certain that Joyce's watermark has already been defaced by a mutation. The bacteria that carry these degraded versions of Joyce presumably do not suffer from these mutations, since the watermarks don't matter to them anyway. So they can keep replicating.By contrast, the DNA in the really useful parts of their genome is changing very little over the generations, thanks to selection. Inserting Joyce into the first synthetic cell was certainly a kind gesture, but not a timeless memorial. It would be fascinating to go back to the synthetic cell colony in a few years and sequence Joyce's line again. I'd bet that it won't even be recognizable anymore. The fate of Joyce's DNA points up something important about this project. There have been lots of headlines over the past day about how the scientists who made this cell were playing God. Yet our power, even over synthetic cells, is limited. Once this new cell came into existence, it started changing through evolution, slipping away from its original form. In fact, evolution is the great enemy of all scientists who want to use synthetic biology to supply us with medicine, fuel, and other valuable things. Once they engineer a microbe, they start to lose control of their handiwork. Life takes its own course from there. It is life, ultimately, that recreates life from life.