It's a Giant Cuttlefish Mating Spree!

Off the coast of South Australia, an unremarkable setting conceals one of the ocean's most spectacular events. 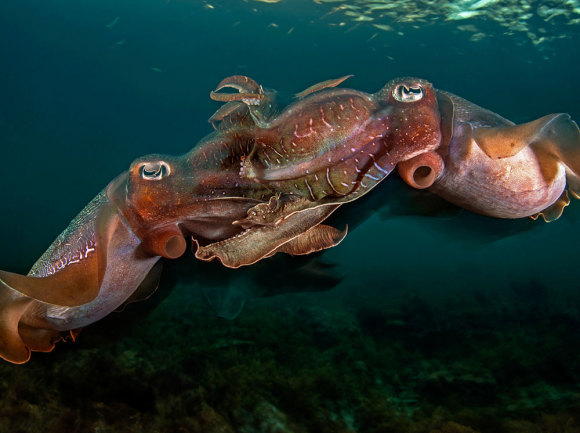 A pair of giant Australian cuttlefish mate at dusk. 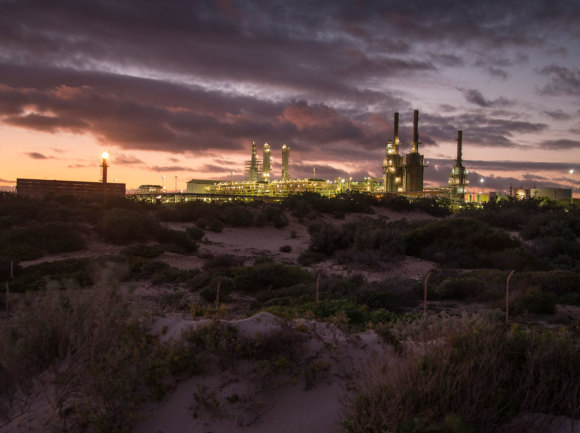 A burgeoning oil and gas industry has led to increased shipping activity in the Spencer Gulf—one of several factors that may be impacting cuttlefish aggregations. 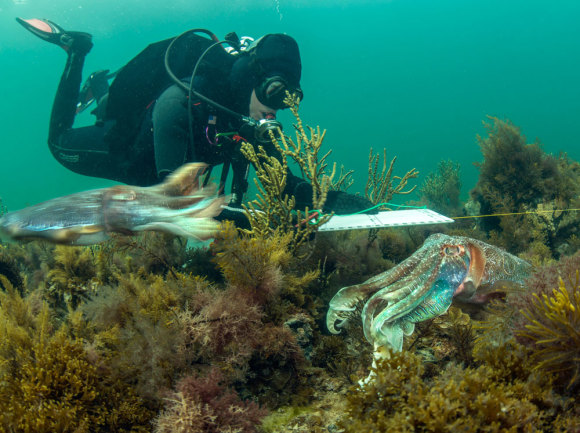 Since the formation of a cross-government cuttlefish working group in July 2012, several research projects have investigated concerns about the significant decline of cuttlefish numbers during the annual winter breeding aggregation in the Spencer Gulf. 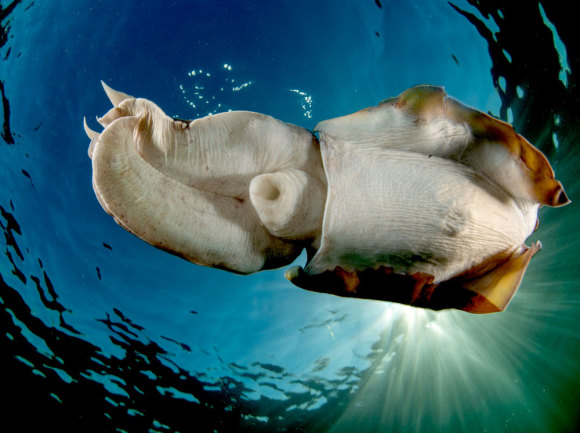 This cuttlefish has already mated and is nearing the end of its life. Toward the end of the cuttlefish breeding season, fights between competing males are common, and many bear scars from the encounters. Exhausted from these battles, the males often float to the surface, die, and wash ashore. 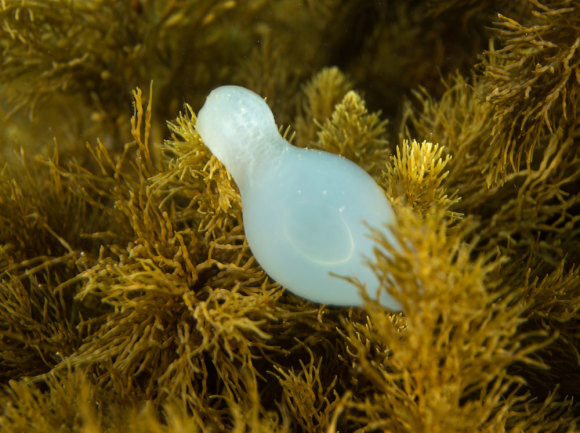 Research has shown that hatchling success is affected by both water temperature and salinity. When development progresses normally, hatchlings emerge as fully formed miniature versions of the adult cuttlefish about 3–5 months after the eggs are laid. 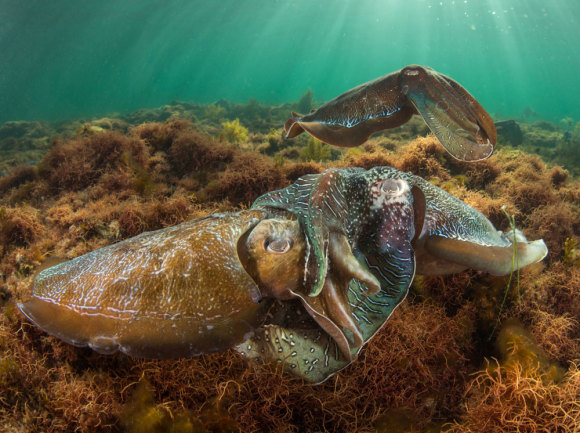 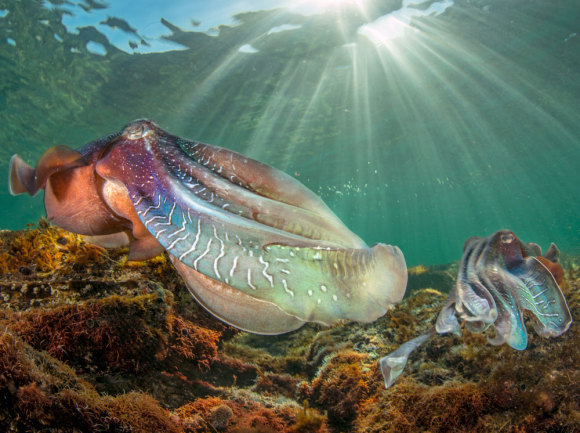 A pair of male giant Australian cuttlefish face off at sunrise. Males can grow up to 1 meter (3.3 feet) in length and weigh up to 16 kilograms (35 pounds). 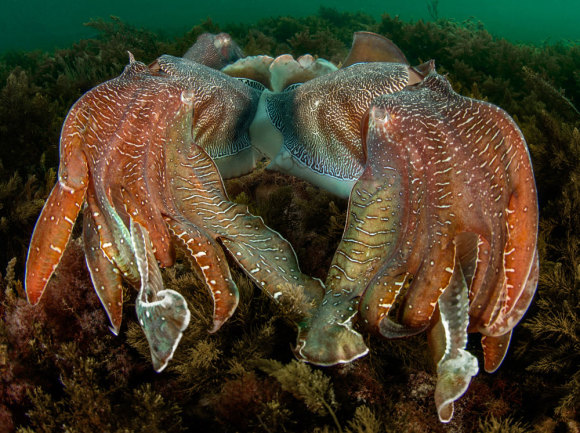 A pair of males engage in a full fighting display over a female, faintly visible in the top left of the photo. Their jostling often breaks out into bold physical displays during which their colors change like the light pattern of a strobe. 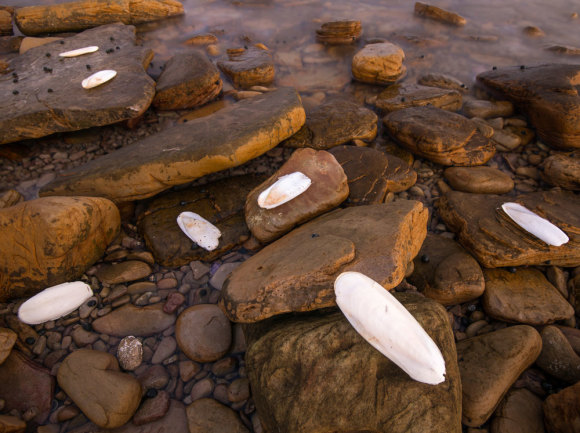 Cuttlefish live on average just 12 to 18 months. When they die, the only evidence they leave behind is the cuttlebone, an internal shell filled with gas that the animals use for buoyancy control. Large numbers of these shells are often found scattered along the shoreline at the end of spawning aggregations. 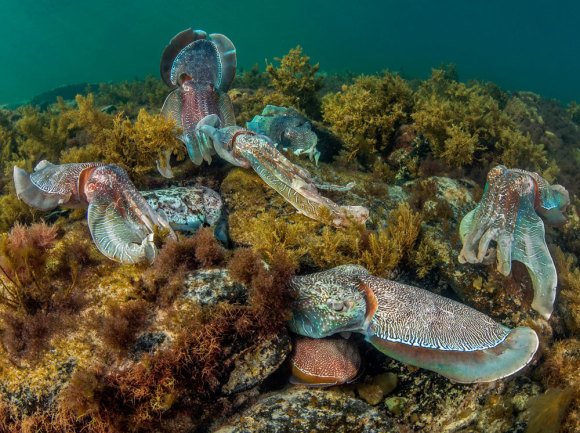 Female cuttlefish lay their eggs under flat rocks while dominant males stand guard. Males outnumber females by at least four to one, leading to interesting behavioral displays as the males compete for the females’ attention. 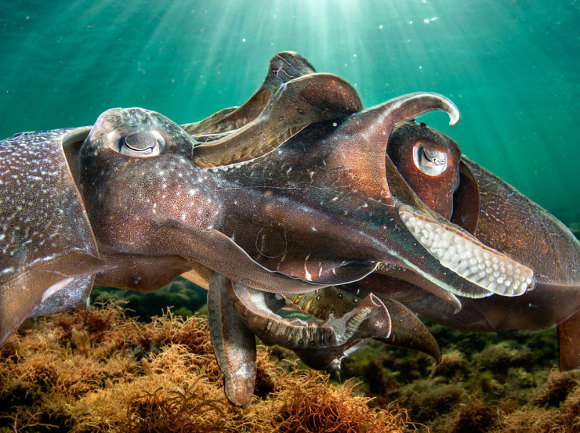 Scanning the austere coastline surrounding South Australia’s Spencer Gulf, there would be little reason to suspect that anything extraordinary ever happens in this place. A monotonous landscape of sand, rocks, and shrubs is interrupted only by the occasional gas refinery or lead smelter. The name of the area’s most prominent landmark, Point Lowly, practically promises obscurity. But dipping beneath the surface of the Gulf’s chilly mid-winter waters reveals a different world altogether. Here, aggression, deception, and sex rule the day. For reasons no one completely understands, Point Lowly has become the spot where the world’s largest cuttlefish—a type of free-swimming mollusk most closely related to octopuses and squids—comes to spawn en masse.

In this photo, a pair of giant Australian cuttlefish engage in a mating embrace at sunrise off Point Lowly. When the male is ready to mate, he grabs the female with his tentacles and turns her so they are face-to-face. He then uses a specialized tentacle to insert sperm sacs into an opening near her mouth.

These photos originally appeared in bioGraphic, an online magazine featuring beautiful and surprising stories about nature and sustainability. To learn more about the mating spree of the world's largest cuttlefish, read Steven Bedard's full story, 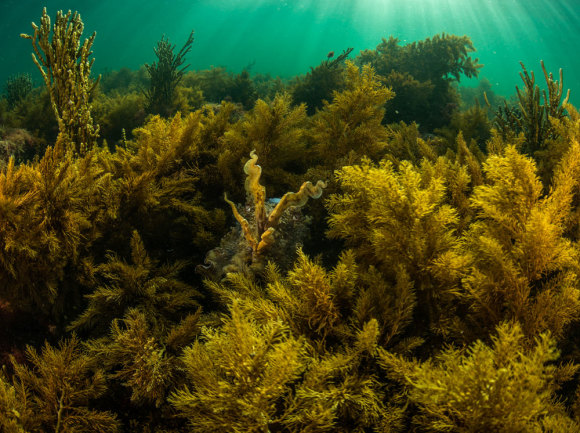 Masters of disguise, cuttlefish can alter the appearance of their skin to match the color, shade patters, and even the form of surrounding algae fronds. 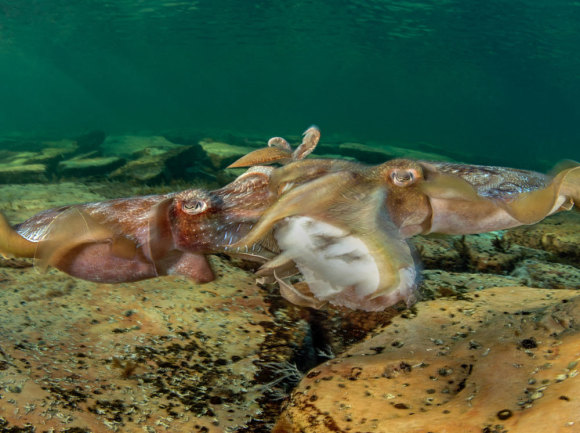 In a rarely witnessed scene, two cuttlefish fight over the body of a dead one, presumably in the hopes of feeding on the carcass. 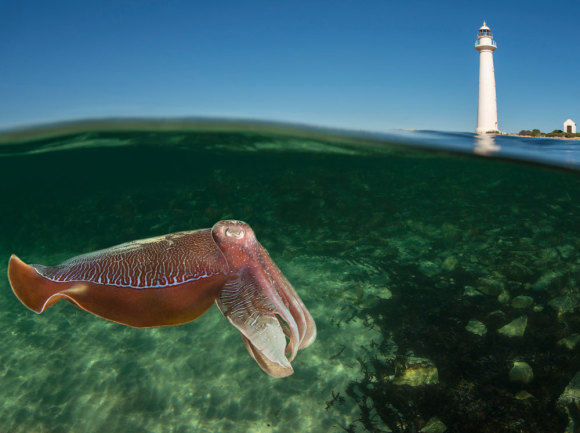 Justin Gilligan captured this split-level image of a giant Australian cuttlefish beneath the Point Lowly Lighthouse. The lighthouse was constructed in 1883 to guide ships safely through Spencer Gulf en route to Port Augusta and Port Pirie in South Australia. 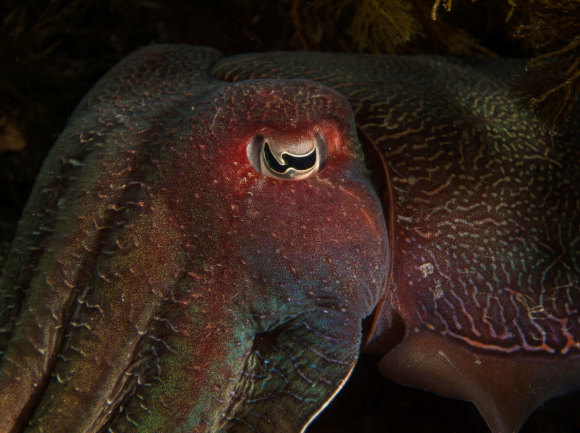 Cuttlefish eyes are unusual in that the pupils take on a distinctive W-shape under bright lighting conditions. In darkness, the pupils become large and circular.