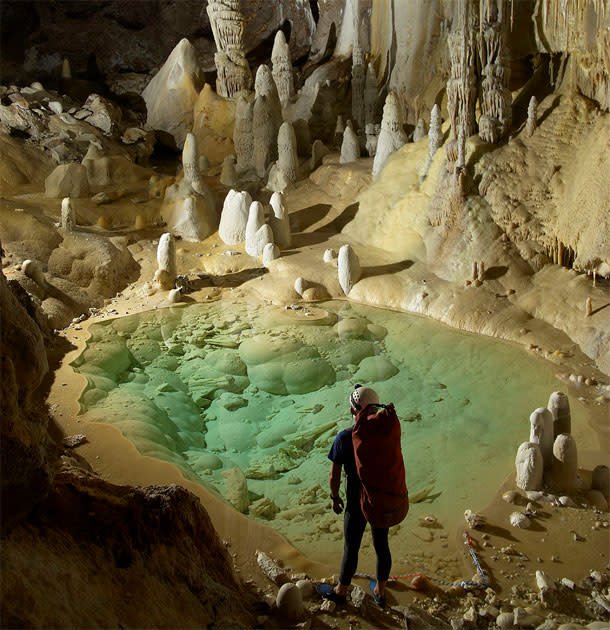 The caverns of Lechuguilla Cave are some of the strangest on the planet. Its acid-carved passages extend for over 120 miles. They’re filled with a wonderland of straws, balloons, plates, stalactites of rust, and chandeliers of crystal. Parts of Lechuguilla have been cut off from the surface for four to seven million years, and the life-forms there – mainly bacteria and other microbes – have charted their own evolutionary courses. But Gerry Wright from McMaster University in Canada has found that many of these cave bacteria can resist our antibiotics. They have been living underground for as long as modern humans have existed, but they can fend off our most potent weapons. Drug resistance may be causing problems for us now, but for bacteria, it’s just an ancient solution to an ancient problem. Lechuguilla is not an easy place to explore. Cavers need special permits to plumb its depths, and only a handful or two are given out each year. Hazel Barton from the University of Akron got one of them. Her trip lasted four days – the cave is so large that explorers must camp in it. “It’s hot (20'C) and humid, so moving around in there is sweaty business,” says Barton. People get “slimed” by deposits of iron and manganese with “the consistency of black icing”, and must change into clean clothes for exploring the cave’s more beautiful reaches. Barton’s goal was to reach areas that had only been visited by a handful of people, and were devoid of footprints of scuffmarks. The bacteria there have barely been exposed to humans, much less our antibiotics. And since Lechuguilla’s rock is also impermeable, and no sources of water flow into its caverns, it’s very unlikely that antibiotics could have washed in from the surface. Barton eventually collected 93 strains, and Wright’s team tested them back on the surface. Despite their isolation, the cave bacteria collectively resisted almost every type of antibiotic that we currently use. That includes last-resort drugs like daptomycin, which are used to treat hard-to-kill infections. Around two-thirds of the strains resisted three or four different families, and three of them could shrug off 14 different classes. The team say that their discovery supports the idea that antibiotic resistance long precedes the rise of modern medicine. This shouldn’t be surprising. As I wrote last year, many antibiotics come from natural sources, or are tweaked versions of such chemicals. Penicillin, the first to be synthesised, famously comes from a mould that surreptitiously landed on Alexander Fleming’s plate. Daptomycin comes from a bacterium called Streptomyces roseosporus. These chemicals are not human inventions: they’re weapons that microbes evolved to keep each other at bay. They’re also ancient. They evolved between 40 million and 2 billion years ago, and it’s extremely likely that counter-measures have existed for just as long. Indeed, just last year, Wright’s group found the oldest examples of resistance genes, from in bacteria in 30,000-year-old frozen soil samples. The environment is also teeming with resistance genes. In an earlier study, Wright’s team showed that soil bacteria are a massive reservoir for resistance genes – a “resistome“ that infectious bacteria can draw upon. Gautam Dantas found that our soils are so full of resistant bacteria that random sampling produced strains that not only resist antibiotics, but actually eat them. Resistance genes have even cropped up in extreme environments, including hundreds of metres below the earth’s surface and thousands of metres into the ocean. The depths of Lechuguilla can join this list of far-off locales. So, in some ways, Wright’s new study simply tells us what many already knew. But it also provided some surprises. While many of the cave bacteria resisted antibiotics with the same strategies as their surface relatives, others used tactics that are new to science. One species, for example, resisted daptomycin by cracking the drug apart at a critical point. These discoveries could act as an early warning system. Bacteria can transfer genes between one another very easily, so the tricks that environmental bacteria use could easily end up in species that kill people in clinics. Studies like this give us early reconnaissance about unfamiliar weapons that could one day fall into enemy hands. As I wrote last year, this doesn’t excuse the wanton use of antibiotics in modern healthcare and agriculture:

These conditions still create intense evolutionary pressures that favour the rise of resistant bacteria. The fact that resistant genes are widespread and ancient does not change that. It simply means that in times of need, beleaguered bacteria have a vast and longstanding range of defences to draw from. For every new sword that we fashion, there is a millennia-old shield lying around, just waiting to be brandished again.

But there is a brighter side to this story. Bacteria were their own worst enemies for eons before humans arrived. They competed over resources, and killed each other with chemicals. These microscopic wars might furnish modern bacteria with ways of resisting our drugs, but they might also provide us with new drugs. As Wright writes, “There are a myriad of bioactive molecules with antibiotic properties waiting to be discovered.” Reference: Bhullar, Waglechner, Pawlowski, Koteva, Banks, Johnston, Barton & Wright. 2012. Antibiotic Resistance Is Prevalent in an Isolated Cave Microbiome. http://dx.doi.org/10.1371/journal.pone.0034953More on drug resistance: