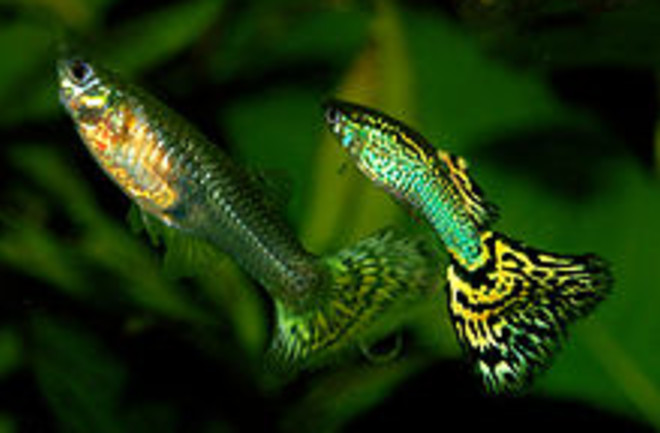 Credit: Marrabbio2There's a nice letter in Nature right now with an understated title, Mating advantage for rare males in wild guppy populations. But if you dig deeper you see some moderately grand claims being made.

The key issue is that the authors seem to be implying that negative frequency dependent selection (NFDS) is a major factor in maintaining genetic diversity in populations.

A reductio ad absurdum of the problem might be to ask why a superior and ideally fit morph does not dominate the whole planet? A more elaborated question lay at the heart of Charles Darwin's The Origin of Species. Fundamentally: why diversity? There have been many answers posited (e.g., see W. D. Hamilton's ideas in regards to sex, Narrow Roads of Gene Land). We needn't try to tackle the whole problem here, no matter what needs to be written in grant applications. Guppies are sufficient and interesting in and of themselves.

Hughes, Kimberly A., et al. "Mating advantage for rare males in wild guppy populations." Nature 503.7474 (2013): 108-110. Legend: a, Number of mates and offspring assigned to common (white, n = 124) or rare (dark grey, n = 42) males. Centre values are marginal means from the full generalized linear mixed model; bars indicate s.e.m. adjusted for model covariance parameters. **P < 0.005 and *P = 0.01, respectively; see Extended Data Table 1. b, c, Association between square-root orange area and reproductive success in Quare River 7 (solid line, n = 34), Quare River 1 (dashed line, n = 72) and Mausica River (dotted line, n = 60), predicted from the full model. b, Predicted mates. c, Predicted offspring; see Extended Data Table 2. Minimum and maximum values along abcissa indicate range of values recorded.This particular paper is not a lark. Believe or not there is a large body of behavioral ecological research on guppies. I highly recommend Lee Alan Dugatkin's The Imitation Factor: Evolution Beyond The Gene, and dare you to not be convinced that guppies (and other animals) can't give very general insights. So what's NFDS? Basically it's the opposite of the Matthew effect; the poor (rare) get rich (frequent), and the rich (frequent) get poor (rare). In a co-evolutionary scenario with pathogens the logic is simple. Imagine an allele, a, which confers resistance to a pathogen in a fixed state, P. Eventually the allele frequency will begin to rise. At this point the pathogen will begin to adapt. New variants among the pathogens will be favored, and the resistence overcome. At this stage a will no longer be quite so favored. The ancestral allele, A, may be favored again. And so on. A complex dance will naturally occur as alleles swing about the equilibria in a series of oscillations contingent upon other factors. What the authors above showed is that rare color phenotype seems to be favored by females among guppies. They established these results by manipulating natural populations, and perturbing phenotype proportions. The problem is that in natural populations the phenotypic frequencies will be near equilibrium, and so the advantage accrued to the rare males will be diminished...because very few are truly rare. The advantage to the males in these experiments (two-fold) was very convincing to me. They might not be natural conditions, but they illustrate the underlying power of the dynamic of rare male advantage. And there are many researchers who don't believe that this phenomenon of phenotypic diversification is limited to just guppies. It may apply to humans. But obviously there are many unanswered questions. Some types of rarity are selected against because they are repulsive. We know this intuitively. So the parameter space of morphological diversity is constrained. A sort of unity in the diversity. And the authors here have no overpowering rationale for why rarity might be favored. They say:

Despite strong evidence for the rare-male effect in guppies, the evolutionary processes that account for its prevalence are not known. Mate preference for males with unusual colouration might have evolved as a mechanism for inbreeding avoidance, as a consequence of generalized neophilia, or because females avoid remating with previous mates and also reject males with colouration similar to that of previous mates. It has been previously proposed that a survival advantage to rare morphs, as demonstrated in ref. 8, could also drive the evolution of mate preference for rare phenotypes, even though rarity itself is not heritable.

And yet I have confidence the answers will come some day. Once the general framework is in place the machinery of science and publication will begin to start moving.... Citation: Hughes, Kimberly A., et al. "Mating advantage for rare males in wild guppy populations." Nature 503.7474 (2013): 108-110.