Is the World's Largest Volcano Getting Ready to Erupt?

Mauna Loa, the largest volcano on Earth, has been showing signs of heightened unrest. Is it getting ready to erupt for the first time in almost 40 years? 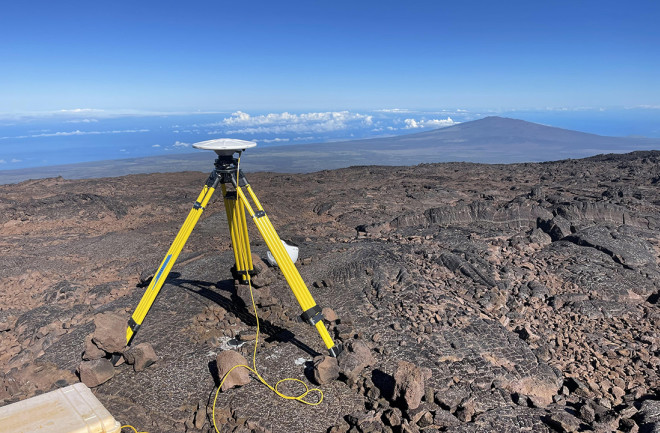 A GPS station on the slopes of Mauna Loa in Hawaii, taken May 2021. Credit: US Geological Survey.

No volcano on Earth is as large as Mauna Loa on the big island of Hawai'i. The giant edifice rises from sea level to over 13,700 feet ... but that is only the top of the volcano. If you count the parts of Mauna Loa below the Pacific Ocean, it towers over 29,000 feet from bottom to top -- as tall as Mount Everest. Yet, for anyone under 40, Mauna Loa is seen as a quiet volcano. The last eruption ended in 1984 and since then, Kīlauea has been the star of the Hawaiian volcanoes. However, signs at Mauna Loa suggest that things could be changing.

This morning, the Hawaiian Volcano Observatory issued an update about conditions at Mauna Loa. Over the past few weeks, the number of earthquakes under the volcano has been creeping upwards, from the usual background number of 5-10 per day to over 100 per day at the end of September.

Locations of earthquakes under Mauna Loa from September 29 to October 6, 2022. Credit: US Geological Survey/HVO

Depths of Earthquakes at Mauna Loa from September 29 to October 6, 2022. Credit: US Geological Survey/HVO.

This is corroborated by evidence that the summit is inflating as well. Magma takes up space, so if it is moving into the summit area of the volcano, the land surface has to move outwards. This inflation has been happening for a long time -- at least over the past year -- so it doesn't mean an eruption is necessarily starting soon.

Mauna Loa, like any potentially active volcano, has had multiple periods of heightened earthquakes and inflation over the 38 years since its last eruption. This is common at many shield volcanoes like Mauna Loa, where magma is rising from the boundary of the mantle and the crust, where the plume of hot material (called a hotspot or mantle plume) coming from deep in the Earth melts. It can collect at different levels in the crust or within the volcano itself.

What exactly triggers a new eruption to start is still not entirely clear. It could be increased magma coming into the system. It might also be the system reaching some critical pressure thanks to all the gases that come off the magma as it rises as well. Very rarely, it might be a big earthquake near the volcano (and not triggered from some distant earthquake).

The Hawaiian Volcano Observatory currently has Mauna Loa sitting at a Yellow/Advisory status, meaning that the volcano is showing signs of unrest. The United States has multiple volcanoes at different levels of alert. Kīlauea as well as Great Sitkin and Pavlof, both in Alaska, as at Orange/Watch alert as they have continuing, small eruptions. Alaska also has the other volcanoes at Yellow/Advisory (beyond Mauna Loa): Cleveland, Semisopochnoi and Trident. This is par for the course in terms of unrest at volcanoes across the 50 states.

A view of Mauna Loa flanked by clouds, seen from the International Space Station on December 25, 2020. Credit: NASA.

With Kīlauea still erupting, if Mauna Loa does spring back to life, it will be the first time since the 1980s that multiple volcanoes on the big island were active. Mauna Loa also has the potential to be a hazard for many people on the island. Lava flows from the volcano reached the outskirts of Hilo during the late 19th century, so that is definitely in the minds of hazard planners and emergency management in Hawai'i. We'll have to wait and see what direction this unrest heads at the world's largest volcano.