Is Sudden Infant Death Syndrome caused by a serotonin imbalance?

There can be few events more devastating for a parent than cot death - the sudden and unexpected death of a baby. Cot death is more formally known as Sudden Infant Death Syndrome (SIDS) and it is an apt title, for affected babies often seem outwardly healthy and show no signs of suffering. Studies have suggested that things like passive smoke and breastfeeding can affect the risk of SIDS but the underlying biology behind the syndrome is a mystery, as is the cause of death in most cases.

But it's a mystery that's slowly being solved. The latest and most intriguing clue comes from Enrica Audero from the European Molecular Biology Laboratory, working together with European researchers and a special strain of mice. Audero has shown that altering the balance of the signalling molecule serotonin in the brainstems of mice can lead to sudden demise, in a way that resembles the unexpected death of SIDS babies. The mice spontaneously go through "crises" where their basic body functions like temperature control and their heartbeat go haywire.

Audero's work builds on research published by an American group two years ago, which first suggested that SIDS is the result of faults in the way our brains reacts to serotonin. This signalling chemical helps to control the core functions of our body that lie outside the realm of conscious thought. It's the serotonin system that lords over our heartbeats, breathing, sweating and shivering, while our brains are busy processing blogs or solving Su Dokus.

Through a series of post-mortem exams, David Paterson showed that SIDS babies have more serotonin-releasing neurons, but a lower density of serotonin receptors - protein docks that the molecule sticks to. It was a start, and Audero capitalised on it by showing for the first time how an altered serotonin network could actually lead to sudden death.

Of mice and babies

Her team developed a strain of mice with abnormally high levels of Htr1a - a serotonin receptor. With ten times more Htr1a than their littermates, you might expect these mice to be extremely responsive to serotonin, but in fact, the opposite was true. 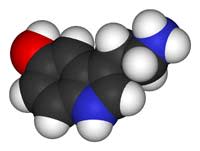 Serotonin is one of many chemicals in our body that regulates itself. It's secreted by a cluster of nerve cells within the brainstem called the raphe nuclei, which are also loaded with Htr1a receptors. The docking of serotonin, among other events, stops the raphe nuclei from pumping out more - serotonin is a signal that limits its own transmission. And this self-regulation means that a surplus of Htr1a actually resulted in much weaker responses to serotonin signalling.

The big surprise was that the majority of these altered mice shared the sad fate of human SIDS infants, with most dying before reaching 3 months of age. Their heart rate and breathing were mostly normal, but unlike normal mice, they dropped abruptly and frequently. Every time it happened, the mice took days to recover and each time, there was a one in three chance that they would die from an irreversible fall in both heart rate and body temperature. SIDS babies too, tend to show falling heart rates and breathing patterns.

And like SIDS babies, the altered mice were most vulnerable during a critical time window. If the extra Htr1a copies were switched on after 40 days, 90% of the mice died but only 30% did if the team waited until the 60-day mark to flip the switch. A twenty-day window separated an almost certain chance of death, with a fairly good chance of survival.

Audero confirmed that it was the extra serotonin receptors that were the problem - her mice were engineered so that the extra Htr1a copies could be removed with an antibiotic called doxycycline and this treatment restored their normal lifespans. Likewise, a chemical that blocks the Htr1a receptor saved their lives.

She wasn't able to directly identify the cause of these crises, but she believes that environmental stress may be the key. The extra receptors disrupt lines of communication between serotonin neurons and those in the spine that are connected to major organs like the heart and lungs. These networks control the body's responses to the outside world and if they don't work properly, the mice cannot right themselves in the face of environmental changes.

For example, when a normal mouse gets cold, its serotonin neurons would tell its brown fatty tissue to generate more heat, by switching on a gene called UCP1. But this process completely fails in mice with an abundance of Htr1a receptors - when they get cold, they stay cold, and a fall in body temperature is just one of the symptoms of a crisis event.

The results are a bit of a surprise. After all, mice can survive quite happily if they are born without any serotonin neurons at all, even though their behaviour may be different. Audero isn't suggesting that human SIDS babies have extra serotonin receptors; you'll remember from Paterson's study that they actually have a lower density of these. But the results do suggest that an imbalance in serotonin signalling can be life-threatening. Even without any overt outside shock, it's enough to trigger the sort of sudden failure in core body functions that is typical of SIDS. The means may be different in humans, but the ends are the same.

Now, at least, we have a useful animal model for studying the condition and answering some key questions - are crises more likely to happen during sleep (when most human SIDS cases take place), are there signs that can predict the onset of a crisis, and are there ways to predict which babies have a high risk of the condition?