Is It Possible to Forecast Evolution? 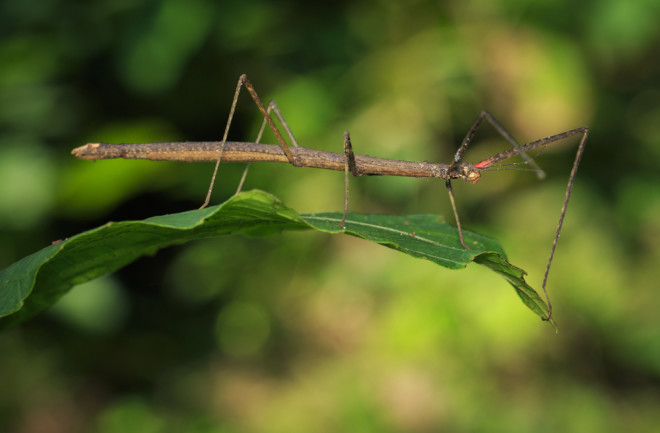 (Credit: yod67/Shutterstock) Can we predict the course evolution will take? That's the question an international team of researchers decided to tackle, using a quarter-century of stick insect observations. Comparing the first half of the data set to the latter half, they set out to see if they could forecast the path of natural selection.

As it turns out, it's really hard. The researchers were able to predict some simple evolutionary changes, but the rest were subject to forces they couldn't account for. Mother nature is still too complex for us to truly foretell the future. The researchers were using a dataset that stretched back 25 years — an impressively long time period for a study of a single insect. Since the early 90s, one of the study authors and another researcher routinely ventured into the California mountains with nets and captured more than 34,000 stick insects. They found that the insects could be roughly divided into three categories, based on how they looked: Green with a stripe down their backs, green with no stripe, or brown. The variations relate to the kind of plants the insects chose to hide on. One species is more predominantly white, while the other is more green. The insects camouflage themselves accordingly, and the brown insects are colored to hide out on plant stems. The dominant coloration among the stick insects changes, though, and the researchers used this fluctuation to try and predict which pattern would be more prevalent in a given year. With the first decade or so of stick insect data as a guide, they attempted to guess what colors would show up in the next few years. They published their work recently in the journal Science. They were actually successful — to a degree. The researchers were quite good at predicting when the green striped insects or the unstriped green stick insects would dominate over the other. For the next three to five years, they say, they could predict the coloration changes with 90 percent accuracy, and that dropped only to 80 percent by the time a decade had elapsed.

When it came to the brown stick insects, though, the researchers had little luck. Their color forecasts weren't of much use. They think it comes down to the environment. Changes in the color patterns of the green insects are driven by a simple and easily-predictable model called frequency-dependent selection. Basically, it holds that traits can either grow more useful or more dangerous as they become more widespread in a population. For the stick insects, being the same color as most of your friends is bad, because predators learn to recognize what you look like, and can catch you more easily. The researchers observed a cyclical tradeoff between striped and unstriped insects — as one became more popular, it would also become more dangerous. It's a kind of balancing mechanism. But for the brown stick insects, it seems that there are many more variables at play. While frequency-dependent selection doesn't seem to play a role, there are many other possibilities. The brown insects are more common in warm years, even though they have a lower heat tolerance. They also have fewer fungal infections and greater success at mating. These are all variables that could favor or disfavor the brown stick insects, depending on the environmental conditions. And predicting exactly how the Earth will change is far beyond our abilities at the moment. The researchers conclude that the intrinsic complexity of the Earth's interconnecting physical systems makes predicting most evolutionary changes far too difficult. Their conclusions are backed up by other studies of evolution, such as in Darwin's finches, or the peppered moth. Scientists had little success guessing how those animals would adapt. Evolution may not be random, but that doesn't mean it's predictable.