Is crime a virus or a beast? How metaphors shape our thoughts and decisions

In 1990, in a depressed area of Buffalo, New York, eleven schoolgirls were raped. According to George Kelling, a criminal justice scholar, eight of these incidents could have been prevented. After the third case, police knew that a serial rapist was on the loose but, even though they had a description and modus operandi, they issued no warning to local parents. They saw their job as catching the criminal rather than preventing more girls from being raped. Kelling argued that the cops hadn’t wilfully neglected their duties. Their actions were swayed by their views of police-work, which were in turn affected by metaphors. They saw themselves as crime-fighters who trod the “thin blue line” protecting innocent civilians from criminal marauders. With this role entrenched in their minds, they saw their job as catching the rapist, even at the expense of preventing further crimes. As Kelling said, the eight Buffalo schoolgirls “were victims, though no one realized it at the time, not only of a rapist, but of a metaphor.” As with all complex issues, crime is suffused with metaphors. One common frame portrays crime as a disease, one that plagues cities, infects communities, and spreads in epidemics or waves. Another depicts crime as a predator – criminals prey upon their victims, and they need to be hunted or caught. These aren’t just rhetorical flourishes; they’re mind-changing tools with very real consequences. In a series of five experiments, Paul Thibodeau and Lera Boroditsky from Stanford University have shown how influential metaphors can be. They can change the way we try to solve big problems like crime. They can shift the sources that we turn to for information. They can polarise our opinions to a far greater extent than, say, our political leanings. And most of all, they do it under our noses. Writers know how powerful metaphors can be, but it seems that most of us fail to realise their influence in our everyday lives. First, Thibodeau and Boroditsky asked 1,482 students to read one of two reports about crime in the City of Addison. Later, they had to suggest solutions for the problem. In the first report, crime was described as a “wild beast preying on the city” and “lurking in neighbourhoods”. After reading these words, 75% of the students put forward solutions that involved enforcement or punishment, such as calling in the National Guard or building more jails. Only 25% suggested social reforms such as fixing the economy, improving education or providing better health care 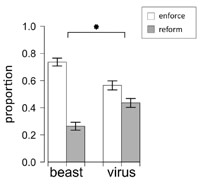 The second report was exactly the same, except it described crime as a “virus infecting the city” and “plaguing” neighbourhoods. After reading this version, only 56% opted for more enforcement, while 44% suggested social reforms. The metaphors affected how the students saw the problem, and how they proposed to fix it. And very few of them realised what was going on. The two reports both contained the same “shocking” statistics about Addison’s crime rates. When Thibodeau and Boroditsky asked the students to say which bits of text had most influenced their decisions, the vast majority circled the numbers. Only 3% noted the metaphors. Thibodeau and Boroditsky confirmed their results with more experiments that used the same reports without the vivid words. Even though they described crime as beast or virus only once, and without any verbs to continue the metaphor, they found the same trend. Compared to students who read about crime as a virus, those who read the “beast” report were more likely to suggest enforcement over social reforms. They were more likely to view police officers as people who catch and punish criminals, rather than people who deter crime or act as role models. They were more likely to look for more information about prisons and the size of the police force, than about poverty levels or youth programs. And as before, they thought the statistics in the report were more important than the language. But these words have no weight on their own; it’s their context that gives them power. When Thibodeau and Boroditsky asked students to come up with synonyms for either “beast” or “virus” before reading identical crime reports, they provided similar solutions for solving Addison’s woes. In fact, the metaphors only work if they frame the rest of the text. If the critical sentence came at the end of the report, it didn’t have any effect. So metaphors can influence opinions and choices, but how strong are their effects really? At the end of their experiments, Thibodeau and Boroditsky asked the students to state their gender and political affiliation. As you might expect, men and Republicans were more likely to emphasise enforcement, while women and Democrats leant towards social reforms. But these factors only created differences of around 8 to 9 percentage points. The metaphors, on the other hand, created shifts of between 18 to 22 percentage points! These results show the hidden power that a simple choice of words can hold over our lives. Indeed, it’s virtually impossible to talk about complex issues like crime, the economy, health and so on, without resorting to metaphors. Some people even use these linguistic devices them as the basis of policy. In Chicago, an epidemiologist called Gary Slutkin is leading a crime-prevention programme that takes the crime-as-virus metaphor literally, treating it as a contagious disease whose spread needs to be contained. These issues apply to science too. Metaphors about electricity as flowing water or teeming crowds can affect a student’s ability to wire up circuit diagrams. Good metaphors can make a complex and obtuse world seem exciting and accessible. A world of telomeres, epigenetic marks and enzymes can be brought to life by comparing them to shoelace tips, Post-it notes, locks and keys. But bad metaphors can do a great disservice to the public understanding of science. The idea of the “evolutionary ladder” perpetuates the myth that evolution is about a steady linear march towards complexity. The militaristic metaphor of the “war on cancer” threatens to undervalue achievements in treatment that fall short of a total cure. The idea of the brain as a computer creates all sorts of misconceptions about how different parts of the brain work, how memories are stored and whether we will ever be able to download or upload our minds. In a field where complex ideas must be conveyed simply but accurately, it couldn’t be more important for science writers to pick the right metaphors. Feel free to suggest your own best or worst examples in the comments. Reference: Thibodeau & Boroditsky. 2011. Metaphors We Think With: The Role of Metaphor in Reasoning. PLoS ONE http://dx.doi.org/10.1371/journal.pone.0016782Image by Alan CleaverMore on metaphors: