Is Cloud Seeding Worth the Bet? 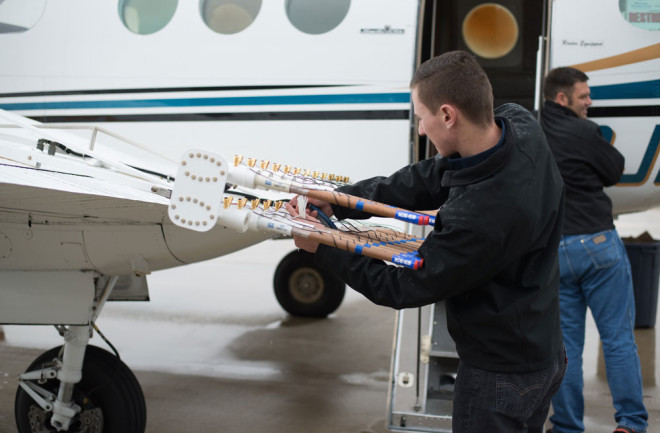 Pilots from Weather Modification, Inc., prepare the cloud seeding aircraft with seeding flares. (Credit: Derek Blestrud, Idaho Power Company) “Make mud, not war.” That was the slogan of the American 54th Weather Reconnaissance Squad, the first military force to engage in weather warfare. Throughout the Vietnam War, they flew 2,602 missions, releasing silver iodide, a compound that seeded clouds and exacerbated monsoons—or so the thinking went. Dubbed “Operation Popeye”, this rainy warfare would last from 1966-72, until banned under the 1977 Enmod Treaty on weather warfare. Popeye wasn’t the only attempt to weaponize seasonal events, but it was the most infamous. There was also, for example, an “exercise” aiming to make the Hồ Chí Minh trail muddier, named “Commando Lava”. The problem with infamy, however, is that the subjects of it rarely live up to the legend. Being that Vietnam was an active war zone with shifting targeting areas, it was difficult to get accurate data on how effective cloud-seeding really was.

A cloud-Seeding kit mounted on a WC-130. (Photo Credit: USAF) But University of Wyoming scientists, the National Science Foundation, and a handful of Idahoan pilots are rushing in to find out just how much control we really have over the weather. Working in concert with the Idaho Power Company, this scientific team will collect data in Idaho’s Payette Mountains to feed into a supercomputer and simulate the effects of cloud seeding. Armed with three Doppler radars, an array of ground sensors and plane-mounted probes, operation SNOWIE (Seeded and Natural Orographic Wintertime Clouds—the Idaho Experiment) will serve as a data-collection mission more advanced than any preceding it. Today, a lucrative application of cloud seeding is electricity generation. Over, say, a mountain range that collects a 300-inch snowpack every year, even a 5 percent bump in snowfall could add up to a profitable gain in electricity output for hydroelectric plants downstream. It’s one of several burgeoning efforts by power companies looking to make betting less risky with more data.

How to Play Rain God

Like private Johnny, cloud seeding has long-since left the war. But for the 56 countries that now have seeding operations, up from 42 in 2011, the technology has undergone a personality split, settling into two camps: hygroscopic seeding and glaciogenic seeding.

(Credit: Wikimedia Commons) With hygroscopic seeding, water-drawing particles—often some variation of salt, such as calcium chloride—are released from planes flying at low altitudes. It works best in “warm clouds” with a substantial amount of liquid water, usually driven by oceanic weather patterns. The particles serve as nuclei whereupon droplets condense and swell until the cloud grows heavy with rain. Glaciogenic cloud-seeding on the other hand, is a frigid affair. “The theory behind glaciogenic seeding,” says University of Wyoming atmospheric scientist Jeff French, is that “the silver iodide acts as what’s called an ice nucleus.” Ice accumulates around the particles at slightly warmer temperature than usual, and in the negative eight to 25 degree Celsius range, French says “ice is very efficient at growing rapidly.” Thus, ice crystallized onto silver iodide—or potassium chloride, dry ice, or liquid propane—begets more of the same, until supercooled clouds are laden with snow.

Weather Is Really A Performance Art

Of the two, hygroscopic seeding is typically employed to fight fires and increase crop yield. And in many of the countries where it’s utilized, it’s employed with a cowboyish gusto. In China, artillery shells packed with seeding material were praised for the clear weather during the 2008 Olympics. In Thailand, the Royal Rainmakers, started by the late King Bhumibol Adulyadej, are hailed as the prop plane-armed crusaders of the nation’s farmers. The data, however, is less kind. “We did quite an extensive study there,” says David Reynolds, a cloud-seeding expert with the NOAA, “I don’t think we really ever determined that was effective or not. South Africa probably has the strongest evidence of increasing rainfall from seeding.” That doesn’t amount to much. On the whole, while most published research on hygroscopic seeding acknowledges some effect, the results are usually inconsistent and marginal. The most detailed survey on cloud-seeding science, a 2003 report, concluded that “there still is no convincing scientific proof of the efficacy of intentional weather modification efforts.” Ditto for glaciogenic seeding, which has come to be a widely-employed tool to suppress hail. The process encourages more vigorous nucleation of ice crystals, which is thought to yield smaller, more dispersed hail, but again results are spotty.

Measuring A Shift Among Variances

“That is not to say there is no result, it’s just to say that they could not show a result,” says French. Although the literature ranges from no effect to, on the high end of the usual predictions, a 15 percent increase in precipitation, the consensus in the community is if there is an effect, the effect is probably somewhere on the order of 5 percent, according to French. That’s a minute signal. The ideal method for measuring the effect would be to compare the precipitation between randomly-assigned seeding and control areas. But a change of 5 percent can easily be “buried within the natural variability of precipitation,” according to Reynolds.

Snow gauges, operated by the National Center for Atmospheric Research, measure how much snow falls. (Credit: Scot Landolt, NCAR) Thus, our best method for analyzing whether or not it works is to gather as much cloud pattern data as possible and simulate the effects of seeding. And in just such a study, published in 2013, researchers in Wyoming confirmed that glaciogenic cloud seeding could actually increase snowfall. That’s good news for hydroelectric companies with money riding on those results, as well as findings from the SNOWIE project. The bulk of the project will take place in the air aboard an aircraft provided by Idaho Power, from which researchers will release silver iodide into the atmosphere. Then, from the University of Wyoming's twin turbo-prop aircraft, called King Air, researchers will take measurements to understand the effects of adding silver iodide to clouds. Finally, the data will be processed at the NCAR-Wyoming Supercomputing Center, which will simulate clouds and snowfall created naturally and via cloud seeding. The findings of SNOWIE won’t apply to every similarly mountainous area with supercooled clouds—there are simply too many variables at play. They certainly will be of limited relevance to rain-making seeding initiatives. Still, beyond serving as push to study a topic that has become an anathema to public research sponsors since the ‘80s—and one bringing better data with more technologically advanced instruments than ever before—SNOWIE is emblematic of a shift in mindset: We need data before praising those 20th century precipitation gods.