Introducing the Heavyweight Dino of the World 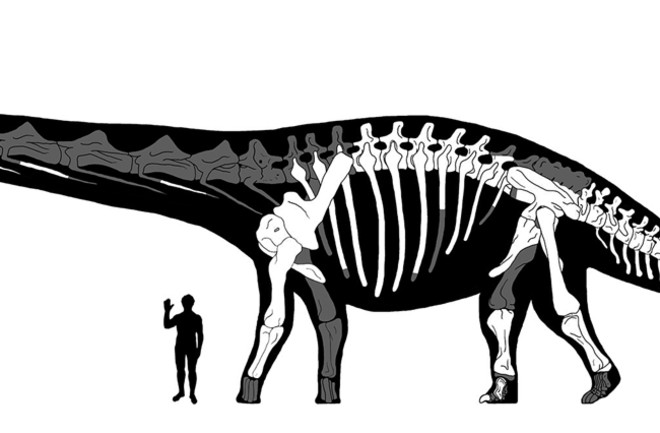 A reconstruction of the skeleton shows, in white, which bones were found. | LaCovara, et. al.

After four years of excavation and five years of study, Dreadnoughtus schrani debuted in September as a top contender for the largest land animal ever: 65 tons and 85 feet long, with a 37-foot neck and muscle-bound 30-foot tail.

Paleontologist Kenneth Lacovara first spotted just a small patch of exposed bone one morning in February 2005 in Argentine Patagonia. Lacovara and fellow Drexel University researchers quickly returned, and by nightfall they had uncovered a 6-foot-long femur. “We knew immediately that we were looking at one of the largest known dinosaurs,” says Lacovara.

Dreadnoughtus lumbered through fern-filled forests between 66 million and 85 million years ago, and it left an astonishingly complete fossil: Almost half of the bones, 145, were recovered. Argentinosaurus, presumed to be the largest titanosaur, is known based on just 13 bones.

“Until Dreadnoughtus, we could only guess at the body proportions of supermassive dinosaurs,” says Lacovara, author of the study, which was published in Scientific Reports. Scars indicate where tendons attached to the “exquisitely preserved” bones and will allow analysis of its musculature.

A reconstruction of the skeleton shows, in white, which bones were found. | LaCovara, et. al.

The Drexel team has released 3-D image files of Dreadnoughtus, making it the first new species presented along with its open-access virtual skeleton. “Any scientist or kid in the world can, to a substantial degree, see just what we were seeing,” Lacovara says.

[This article originally appeared in print as "Heavyweight Dino of the World."]