Into the Permian Woods

In Mongolia, 298-million-year-old plant fossils paint a portrait of what life was like long before the dinosaurs. 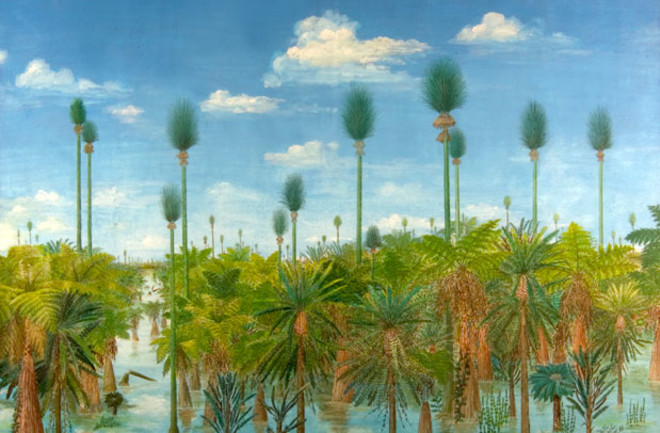 Nearly a decade ago Hermann Pfefferkorn and Jun Wang—scientists from opposite sides of the globe—came together to go prospecting among the granite slabs of Inner Mongolia’s Helan Shan mountain range. From nearby fossil finds, they knew the mountains preserved plants and animals that flourished long before the dinosaurs. Though the researchers had trekked the route often, this time they noticed that coal miners had freshly exposed a gleaming white bed of volcanic rock. The rough sediment appeared to be stamped with blackened forms. When they clambered up to investigate, they realized the markings were hundreds of plant fossils. “As we split the rocks, we saw the marvelous preservation,” recalls Pfefferkorn, a paleoclimatologist at the University of Pennsylvania.

Last April, Pfefferkorn and Wang, a paleobotanist with the Chinese Academy of Sciences, described the full magnitude of the find: an entire swath of ancient swamp forest frozen in time beneath more than 20 square miles of volcanic ash. The scientists realized they could re-create, in striking detail, the swampland that would have stood before them during the early Permian period, 298 million years ago. Back then, the landscape was flat, mostly waterlogged, and thick with greenery. Animals including the Arthropleura—a nearly 10-foot-long relative of the centipede—splashed through grass-free, shallow waters, their feet skimming the spongy peat made from decomposing foliage. Dragonfly-like insects with foot-long wingspans buzzed in the humid air, and chunky primitive spiders called trigonotarbids, bearing thick black-tipped fangs, sat atop trees, says Smithsonian Institution paleobiologist Bill DiMichele. Over tufty ground covers and ferns, the brushlike tops of slim Sigillaria trees towered up to 80 feet high; they are related to club mosses and squat ground pines that today hikers trample without a thought. In patches, the forest thinned and ferny undergrowth dominated.

The site is named Wuda tuff after the district of Mongolia where it was found. Pfefferkorn and Wang informally call it a vegetational Pompeii. It offers a snapshot of a time when present-day North China sat in the tropics, drifting north toward the core of the Asian continent. Earth’s climate was transitioning from greenhouse to icehouse, and the ancestors of modern reptiles and mammals (as well as the precursors of dinosaurs) had begun to emerge from earlier large amphibians. Heavily armored spiny sharks, among the earliest jawed fish, swam in Permian seas. Until recently, little was known about the plant communities that propped up the food chain back then. “Finding a full landscape where the trees are right where they originally stood is very rare,” Pfefferkorn says.

It took him and Wang nearly a decade to analyze their fossil trove. To start, they removed the coal that lay just below the surface; once peat lining the forest floor, it was transformed by the intense heat of Earth’s interior and pressure from layers of ash. Next they used a power shovel to break up nearly two feet of hard volcanic ash, exposing the fossils within. Only then did the researchers get to the fun of identifying the ancient flora. They measured, classified, and documented the location of more than 3,200 individual plants in three patches spanning a quarter acre. Dominant in one area were Noeggerathiales, small palmlike plants with spore-bearing cones beneath a skirt of deep green leaves. These long-extinct trees were never before seen in Permian excavations. Lanky Sigillaria appeared in the northern part of the site; Cordaites, the short, bushy upper-canopy ancestors of present-day evergreens, dominated in the south.

To bring this lost world to life, Pfefferkorn and Wang collaborated with Chinese artist Ren Yugao to create realistic paintings (one of which is shown above) based on their fossil inventory. The resulting work depicts the oldest Permian peat habitat ever reconstructed, and is the only forest reconstruction in Asia mapping the actual location of plants.

Ferns The eight-foot fronds of these Pecopteris tree ferns (a, c-f) created the lush, thick mid-canopy. These dominant plants grew to 20 feet tall and massed their roots in impressive mantles that reached two-thirds of the way up their trunk. The resulting tangled networks provided protective habitats for small animals, hundreds of insects, and smaller plants, which nestled themselves atop the beds of Pecopteris roots in their never-ending search for the sun. The comparatively little Nemejcopteris feminaeformis (b), an herbaceous fern, instead avoided the Pecopteris, sticking to unshaded parts of the forest where it could grow unhindered.—Emma Bryce

Spore-bearing plants Like modern mosses and ferns, these plants depended on an explosion of airborne spores (rather than pollen) to procreate. Asterophyllites longifolius (a-b) looked much like today’s leafless and multistemmed horsetail plant. Sphenophyllum oblongifolium (c-d) is a small, weedy shrub that grew in patches. Sigillaria (e-f) are columnar trees with a grassy crest that averaged 65 feet tall. They displayed clusters of narrow brown cones (g). The towering tree looks like nothing we know today, Pfefferkorn says; its closest living relatives are diminutive club mosses and ground pines.—E.B.

Seed plants Rounded seeds (d) probably fell from the Cordaites tree (a-b). These trees are the shorter, bushy upper-canopy ancestors of today’s evergreens. Cordaites are most like trees we know today: Branches fanned out to form the round shape of tall modern trees, while bunches of leathery leaves sprouted from the end of each limb. Their reproductive organs are seen in fossil (b). Cycads (c, e) are typically stout with a crown of large, stiff evergreen leaves.—E.B..

Orphaned plants All fossil plants at Wuda tuff have modern living relatives except for this set of rare specimens. “Here is a plant group that was really doing its own thing,” Pfefferkorn says. Reconstructions of these evolutionary dead ends reveal exotic, palmlike plants called Noeggerathiales (a-d), their leaves interspersed with spinier foliage. Paratingia (e-j) looked similar to Noeggerathiales, with a medley of large and small leaves. Fossils of these plants had been found before, and were “always recognized as something different and remarkable,” he says. But they have never been seen to dominate an ecosystem as they do in Wuda tuff. —E.B.

No Place for a Picnic Within this swamp lurked giant insects and reptilian precursors to dinosaurs. The foliage was so dense “a human would have had to chop through it with a machete,” says paleobiologist Bill DiMichele.