Into Africa: Did the Earliest Primates Migrate From Asia? 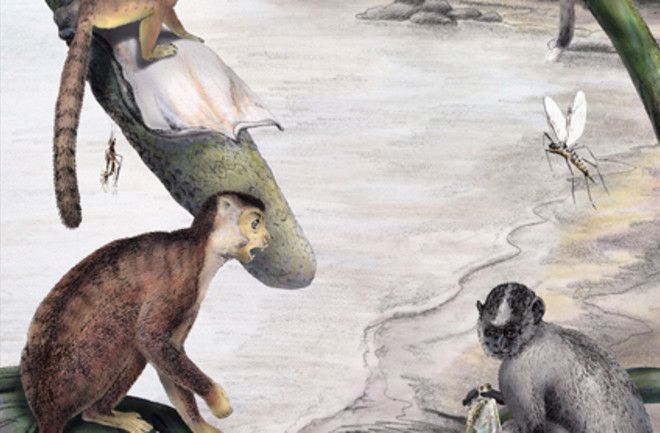 You know the "out of Africa" story: how our ancestors left the savannas where humanity grew up and trekked outward to other continents. Today in Nature, however, a new study of 40 million-year-old fossils argues that an "into Africa" story predates the other narrative: that the animals that would eventually evolve into apes like us and monkeys came from Asia into Africa. These fossil teeth found in Libya belong to early anthropoids, according to the scientists. The team found several different species in this location.

The new fossils are about 38 to 39 million years old, and none of the animals would have weighed more than 500 grams [just more than 1 pound], conclude a team led by Jean-Jacques Jaeger, a palaeontologist at the University of Poiters, France. Their diminutive size fits in with previous research suggesting that early anthropoids started small and eventually evolved ever bigger bodies. [Nature]

We know these early primates got big. The million-dollar question is, where did they come from? Jaeger and the other paper authors note that there's no consensus on the matter. However, they point out, scientists have been looking and looking for fossils in northern Africa

, and they haven't found the missing lineage of the anthropoids. Combined with evidence that anthropoids lived in Asia as far back as 55 million years ago, the authors contend that Asia is their origin.

Given the number of early anthropoids and stem anthropoids which have been found in Asia it seems that not only did anthropoids originate there, but they diversified and different lineages colonized Africa at approximately the same time. Either that or there is some treasure trove of early African anthropoids that no one has seen any sign of just yet – paleontologists will have to dig deep to find the evidence to test these predictions. [Wired.com]

The task now for the team members is to nail down the dates, and be sure when this disparate group of early primates

made their journey into Africa. In any case, the anthropoids found a welcome home there, and we should be thankful, Jaegar says.

Only after the first wee primates migrated out of Asia and scooted rapidly to new habitats in Africa did some anthropoids begin to get larger and start evolving down the path toward becoming apes—and, eventually, humans, he thinks. "If this migration to Africa had not occurred, the anthropoid might have become extinct in Asia and we would not be here," Jaeger says. [ScienceNOW]

Related Content: 80beats: HIV’s Primate Precursor Is Very Old. Why Did It Jump To Humans So Recently?

DISCOVER: Monkeys Show They Know What They Know

Not Exactly Rocket Science: Breaking the Link—Darwinius Revealed as the Ancestor of Nothing