Inside the Restoration of the Amirya Madrassa

The grandeur beneath the rubble was obvious—'impeccable, perfect materials and perfect proportions.' 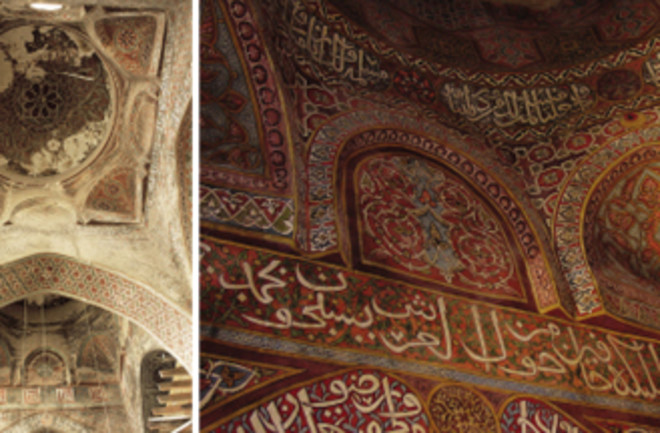 The Amiriya is by far the most exuberant of Yemen's 48 surviving painted mosques. Koranic inscriptions and a multitude of brilliant geometric and floral patterns animate the walls of its prayer hall. Above, the hall before and after restoration. Archaeologist Selma al-Radi calls the hall a pattern book of designs. Some, like those shown below, resemble textile designs from India. | Reha Gunay/Aga Khan Trust for Culture

In the highlands of southern Yemen lies Rada, a dusty, remote town in one of the world's poorest countries. It was not always so. In 1503 Italian explorer Lodovico de Varthema described it as "beautiful and ancient, populous and rich." Its most prominent surviving landmark dates from that time: a grand mosque and palace, constructed by Sultan Amir ibn Abd al-Wahhab. In its prime, the building was a massive, filigreed, colorful monument to Islam, a flamboyant display of wealth born of trade with India. The sultan was so delighted with his project that he ordered lamps lighted in all the windows so that he and his daughter could ride the surrounding hills in the evening and enjoy his glowing creation.

Five centuries later, it lay bulletriddled, trash-strewn, and in ruins. The exterior, constructed of limestone and baked brick, had crumbled. The prayer hall's murals were covered in generations of whitewash. Fine stucco details were smashed, and thin alabaster windows were long gone. Slow decay was the likely future. But Iraqi-born archaeologist Selma al-Radi, a consultant for the National Museum in Yemen, spied the grandeur beneath the rubble and grime-"impeccable, perfect materials and perfect proportions"-and began a determined restoration with help from the Dutch and Yemeni governments.

It took almost 15 years of labor with wooden tools and dental instruments to clean the stucco in the prayer hall. Beneath the whitewash, every crevice was filled with dried carpet-beetle larvae. | Selma al-Radi

Al-Radi had a natural appreciation of Yemen's cultural crosscurrents. Born into an old Baghdad family, she grew up in New Delhi, where her father was Iraq's ambassador in the 1950s. Her mother had taken her to old temples and archaeological sites. She "loved digging in the dirt," and she loved history. Educated in the United States and England, her doctorate in archaeology focused on the Bronze Age in Cyprus. Unrest in her home country made her a wanderer, and she turned to the conservation of forgotten sites in the Middie East. Although her husband, Qais al-Awqati, works in New York as a professor of medicine, much of al-Radi's time for the last 20 years has been spent in Yemen drumming up $2.6 million for the project.

Now her dream stands immaculate, dazzlingly white amid the buff-colored buildings of Rada. The prayer hall's 6,000-square feet are again filled with brilliant, mind-spinning geometric designs and elegant inscriptions from the Koran.

The monument's wealth of patterns reflect cultural influences from a lucrative trading network that once stretched to Cairo, Istanbul, Iran, and India. Seasonal monsoon winds in the Indian Ocean fostered commerce in both luxury and essential goods with India and Africa. Stevedores at the port of Aden, 120 miles south of Rada, unloaded spices, Chinese porcelain,gold, precious stones, slaves, and textiles. They loaded incense, rice, and dates from Yemeni plantations. The trade fed a renaissance in southern Yemen that culminated with Sultan Amir, a member of the local Tahirid dynasty who ascended to the throne in 1489. Soon after, he consolidated a kingdom that stretched from the coasts of the Indian Ocean and the Red Sea to the vast sand deserts of central Arabia. That year he ordered construction of a grand madrassa, or Islamic college, in Rada, to be called the Amiriya in his honor.

With foundation walls three feet thick, the Amiriya, a 16th-century palace and mosque in Rada, Yemen, has weathered earthquakes, monsoons, and tribal warfare. The ruler who sponsored the monument, Sultan Amir ibn Abd al-Wahhab, had a residence on the second floor. The first floor contains this courtyard. | Reha Gunay/Aga Khan Trust for Culture

But before construction began, Portuguese ships were spotted off the coast of Yemen, retracing the course of Vasco da Gama, who had sailed to India in 1498. Soon the Portuguese had taken control of shipping routes in the Indian Ocean. The Mamluks who ruled Egypt solicited help from Sultan Amir to fight the Portuguese. sultan's reluctance to join them led to battles that ended his reign. Trapped by the Mamluk army, was captured and his head impaled on a pike at the entrance to Sanaa, a town about 150 miles from Rada. The Tahirid's ancient enemies, the Zaydi imams from the north of Yemen, took power. They eschewed contact with infidels, and thus the sea trade. For the next 400 years, the imams and the Ottomans of Istanbul vied for control. The Amiriya fell into disrepair.

When al-Radi took on the restoration in 1983, she didn't know where to begin. She consulted with Izzi Muhammad Gasaa, a master stonemason in town, who agreed to work at half his rate. "Ifollowed him," she says, "and learned from him."

He died in 1987 at the age of 62, long before the project's completion. But his son, Muhammad Gasaa, continued the work. Al-Radi used the project to foster traditional building skills among a cadre of workers whom she hopes will rescue the region's heritage. "Eventually, these people will export their knowledge of plaster, wood, masonry, mud bricks, and waterproofing," she says.

Al-Radi despises the common practice of using cement to repair ancient buildings. "Slapping on cement is easy and cheap, but it actually pulls a building apart," she says. "I've told officials in Syria and Jordan and elsewhere that we have the knowledge and techniques to do this correctly, but they think I'm the funniest thing they've ever met."

Using a mortar called qudad, made from a mix of quicklime and volcanic cinders, al-Radi's workers pound a layer into the cracks between brick or stone, then smear a thin layer over the entire external surface of the building. Workers spend months polishing the surface with smooth river stones. Hairline cracks mean that large expanses must be redone. Once completed, qudad can last centuries with little maintenance.

On a recent afternoon, a local man seated in the shade across from the Amiriya called out sharply to al-Radi, asking when he will once again be able to pray in the Amiriya. "It will be a museum," she replied, just as brusquely.