Insects that skate on the ocean benefit from plastic junk 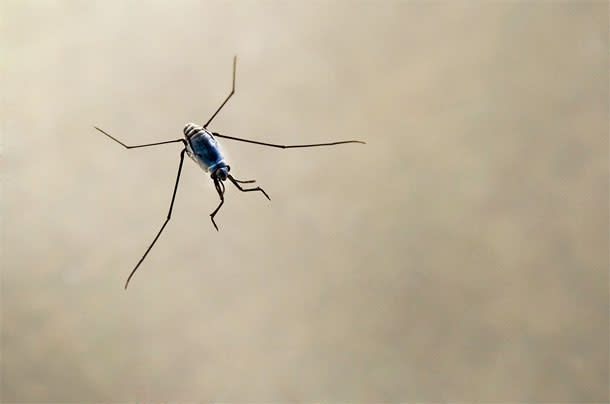 Imagine a world of two dimensions, a world with no up or down… just across. No climbing, falling, jumping, or ducking… just shimmying and sidling. Welcome to the world of the sea skater. Sea skaters, or ocean striders, are small bugs. They’re relatives of the pond skaters or water striders that zip spread-eagled across the surface of ponds and lakes. Except they skate over the open ocean, eating plankton at the surface. “They skate through storms and wind and waves,” says Miriam Goldstein from the University of California San Diego and the Deep Sea News blog. “They even have a little ‘life jacket’ - the hairs on their body trap air so if they get sunk by a wave, they pop back up. They’re amazing!” There are only five species of sea skaters, all belonging to the Halobates group. Of all the millions of insect species, these five are the only ones to live out at sea. Now, Goldstein has discovered that one sea skater Halobates sericeus actually benefits from what most people would regard as an ecological disaster – the circling mass of plastic and debris known as the Great Pacific Garbage Patch. Contrary to more fanciful descriptions, the ‘Patch’ is not a continuous blanket of trash. It’s a zone in the northern Pacific Ocean, where man-made junk has been swept into a set of rotating currents called the North Pacific Subtropical Gyre (NPSG). Centuries ago, bits of wood, rock and shells were the only things floating in this zone. This flotsam has since been joined by the carcasses of bags, bottles, packaging, and other human heirlooms. “Anything that’s thrown into the ocean in the North Pacific ends up in the NPSG eventually if it doesn't sink or biodegrade, because of the way the currents go,” says Goldstein. Around 90 per cent of the garbage in the patch consists of ‘microplastics’ – bits that are smaller than a fingernail. They're the remnants of larger pieces, torn apart by sun and wave. Everything eats them: fish, crustaceans, even filter-feeders like mussels and barnacles. They clog up guts and bloodstreams. They leach synthetic chemicals into the environment. But they’re also a boon to sea skaters. These insects need hard surfaces to lay their eggs upon, and microplastics provide those in abundance. Goldstein first noticed the connection while sifting through plankton samples, which she collected during a recent research cruise through the Garbage Patch. As she sifted out bits of plastic, she noticed the H.sericeus eggs attached to them – just one or two to each piece. Marci Rosenberg, a high school student, helped her to sift through all the samples, meticulously counting the attached eggs. She worked though samples from the 2009-2010 cruise, as well as much older ones collected during 1972–1973 by Lanna Cheng, the lead author of the study. In the older set, the numbers of eggs were unrelated to the level of microplastics in the water. That’s not the case now. Since the 1970s, microplastics in are hundreds of times more common in the North Pacific, and the sea skaters are now closely connected to them. The more plastics in the sample, the more skater eggs there were. It’s not clear how the rising numbers of skater eggs would ripple through this new ‘plastisphere’. The eggs provide food for ocean animals like crabs and fish, but the skaters also eat plankton and fish eggs. “We don't really know the effect of adding all these hard surfaces to an ecosystem that historically has very few. This paper is an early attempt to try to understand that,” says Goldstein. It’s not just about sea skaters either. There’s a large community of sea-dwellers that also grow on floating objects, including microbes, algae and bryozoans. They might also benefit from the accumulating plastics in the water. Goldstein says, “This is a pretty low biodiversity community, though, and it's probably not the kind of place that we want the ocean to be. PS: Rosenberg was a junior at high school when she contacted Goldstein about working on oceanic plastics. She ended up taking this project to her school science fair, and made it to the state competition. She even presented a poster at the Western Society of Naturalists conference. “Marci is a great scientist - curious and careful - and I think this project shows that doing cool science doesn't depend on age or career stage,” says Goldstein. Reference: Goldstein, Rosenberg & Cheng. 2012. Increased oceanic microplastic debris enhances oviposition in an endemic pelagic insect. Biology Letters. http://dx.doi.org/10.1098/rsbl.2012.0298Image by Anthony Smith