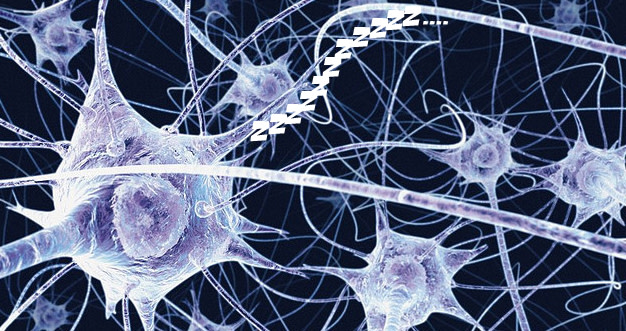 We all know people who look like they can nod off with their eyes open. These exceptions aside, we generally think of sleep as a switch with two settings – you’re either asleep or awake. But Vladyslav Vyazovskiy from the University of Wisconsin-Madison has found that sleep is more complicated than that. By studying the brains of sleep-deprived rats, Vyazovskiy found that individual neurons can effectively fall asleep, going “offline” while those around them carrying on firing. Even if the rats are awake, parts of their brain can be taking a nap. What we know as “sleep” is the global version of something that happens throughout the brain at a local level. Our neurons exist in two states. When they’re “on”, they have an electric charge across their membranes and they fire erratically and often. When they’re “off”, the charge disappears and they stop firing altogether. When we’re awake, our neurons are mostly on. When we’re asleep, they cycle between the two states, in time with one another. Scientists can detect these flips as “slow waves” on an electroencephalogram (EEG). To find out what happens in a sleep-deprived brain, Vyazovskiy kept rats up past their bedtime and used small sensors to measure the activity of individual neurons. Many of us know that distracting toys can stop us from sleeping – so it is with rats. Vyazovskiy woke them up bright and early, when they would normally be asleep, and gave them new objects to play with for four hours. The rats stayed awake and the sensors recorded their brain activity as they muddled through. The readings were largely what you would expect. As the hours wore on, they showed an increasingly strong “slow-wave” signal, just as you’d see in sleep-deprived humans. But Vyazovskiy noticed something unusual – for brief periods of time, some of the neurons stopped firing. They had switched ‘off’. It seemed that as rat feels a greater urge to head for bed, several of its neurons beat it there. They move to a sleep-like state while it’s still awake. These local sleeps happen throughout the brain. Often, neurons in one part of the brain would flip off while their peers in another area would stay on. Even neighbouring neurons can differ in whether they’re on or off. As Christopher Colwell writes in a related editorial, the “basic unit of sleep is the electrical activity of a single cortical neuron”. These bursts of local sleep are very different from the “microsleeps” that humans experience. During these short bursts, we close our eyes and fall asleep for a few seconds before waking up again. We’re actually asleep. Vyazovskiy’s rats were not. While their neurons were snoozing, they had their eyes open and they responded to triggers. They were most definitely awake, even though parts of their brains were not. As a rat becomes more and more sleep-deprived, these local blackouts become more common. They also start synchronising. Neurons throughout the brain start switching off at the same time, much as they do during sleep. With his wires, Vyazovskiy could watch a bunch of unconnected local events build into a global one. The opposite happens when the rats finally get their slumber. As they become more and more rested, their global slow-waves devolve into local bursts of sleep. Richard Allen, who studies sleep at Johns Hopkins University, says, “This is a very exciting paper.” He speculates that local sleep might help to refresh neurons that are overly burdened by being constantly on. “Wake neurons apparently have active levels that they cannot maintain indefinitely, and they require off periods,” he says. By switching off our neurons individually, we can still stay awake for longer periods of time, even when we’re tired. It’s the equivalent of sending our brain into an energy-saving mode. Vyazovskiy has yet to test this idea, but there are precedents in other animals. Whales, dolphins and several birds can send each half of their brain to sleep in shifts, so that they can stay continuously awake. But there’s a difference between this trick and the local sleeps of rats. A dolphin can stay this way for five straight days without any loss of mental agility. Rats, and indeed humans, cannot. We suffer from lapses in attention, irritability and poor judgment, often without realising it. The same applies to the rats. Vyazovskiy trained them to reach for a sugar pellet and found that, predictably, the longer they stayed awake, the more they missed the pellet. But the local blackouts seemed to precede the unsuccessful attempts by a few hundred milliseconds. If even a small group of neurons switched off, the rat’s odds of grabbing the pellet fell by more than a third. Local sleeps clearly cannot fully fix the problems of fatigue; they may even contribute to them. This fascinating study opens up many different questions, and avenues for research. We could use light-controlled techniques to send specific groups of neurons to sleep, and see how this affects an animal’s performance. It would be fascinating to see what happens in the brains of sleepwalkers, hibernating animals, or people with sleep disorders. For now, it’s clear that the brain needs to shut its entire cadre of neurons down to give them a chance to recover. “The local sleep appears to be inadequate to meet the needs of neurons, and eventually the "off" periods become too many,” says Allen. “Evolution has developed methods of integrating these [local] events into global or coordinated off periods.” That’s when we shut out eyes, lie down, become unresponsive, and go to sleep in the traditional sense. Reference: Vyazovsky, Olcese, Hanlon, Nir, Cirelli & Tononi. 2011. Local sleep in awake rats. http://dx.doi.org/10.1038/nature10009Image: by Hijod HuskonaMore on sleep; Even without practice, sleep improves memory of movementsSleeping on it – how REM sleep boosts creative problem-solvingThe point of sleep, or, Do fruit flies dream of six-legged sheep?To sleep, perchance to dream, perchance to remember