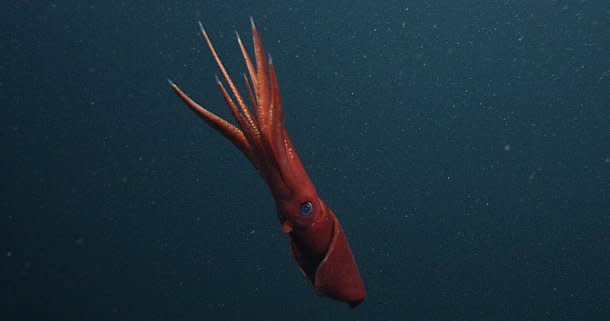 In the dark abyss of the ocean, animals cannot afford to be choosy. The odds of bumping into another individual are low, and appropriate willing mates are even harder to come by. To deal with this problem, the deep-sea squid Octopoteuthis deletron has become somewhat indiscriminate. The males will mate with any squid they come across, whether they’re male or female. Hendrik Hoving from the Montery Bay Aquarium Research Institute found evidence of these same-sex matings with a robot submarine. Controlled from a surface ship, these vehicles can explore depths that humans cannot. The subs have captured videos of O.deletron since 1992 (videos here), but the team have only just revealed the nature of the squid’s sex life by studying the archival footage. O.deletron is a handsome red squid, around five inches long, with hook-lined arms and flashing patches on its flanks and arm tips. Most squid and octopuses deliver their sperm along one of their arms – a modified limb called a hectocotylus. O.deletron is unusual in having a separate penis, distinct from its arms. It uses this long organ to dab a female’s body, attaching a pouch called a spermatophore, which contains millions of sperm. The pouch discharges sacs called spermatangia, which implant themselves in the female’s body. The sacs are visible from the outside, marking out recently mated individuals for observant scientists to see. Hoving found these sacs on the bodies of both male and female squid in equal proportions. Both sexes had been implanted with sperm. This is just one of thousands of examples of homosexual behaviour in animals, and there have already been a few reports among cephalopods – the group that includes octopuses, squids and cuttlefish. The famous giant squid might even partake in gay sex from time to time. Of the twelve mature males that have been found, seven had spermatangia implanted on their arms. However, Hoving notes that some of these squid were caught in nets, and in their distress, they may have mistakenly implanted themselves with their own sperm. He also says, “Accidental self-implantation during mating with a female is also a possibility.” But that’s not the case for O.deletron. Hoving noticed sperm sacs on parts of the males’ bodies that lie beyond the reach of their penises. They must have been stuck there by another male. But why would O.deletron males waste their sperm on other males? Hoving thinks that speed is the answer. Many species of squid live fast and die young. They only have a narrow window in which to have sex before they perish, so they do so very quickly. There is little time for an elaborate courtship when your reproductive life is quickly ticking away. A male O.deletron that encounters another individual has mere seconds to decide whether to implant its spermataphore or not. That choice isn’t helped by the fact that males and females are roughly the same size with only minor physical differences. If the male chooses poorly, and misses out on a suitable female, it could well die before it stumbles across another mate. Better to ejaculate on everyone, and ask questions later. Reference: Hoving, Bush & Robson. 2011. A shot in the dark: same-sex sexual behaviour in a deep-sea squid. Biol Letters http://dx.doi.org/10.1098/rsbl.2011.0680Image copyright of MBARI More on squid: