These small studs, arranged in grids and honeycombs, look completely unnatural. If the image was life-sized, you might think that they’re part of a bizarre children’s toy. If they had been photographed from far away, they might be buildings in an alien city. But they are neither. They have been intensely magnified; a thousand of them could fit across a human hair. They studs are part of the skin of a tiny insect-like creature called a springtail. They’re the secret behind its incredible waterproof shell. There are more than 7,000 species of springtail, and they’re among the most abundant animals that you can still see with the naked eye. Most are no bigger than a pinhead. They crawl through soil and leaf litter on six legs, and they leap about using a spring-like tail held under their body. Once thought to be insects, they are now classified in a separate but closely related group. Unlike insects, which breathe using tubes called trachea, the springtails breathe directly through their skin. And this means that if they get wet, they suffocate. This might be a problem for creatures that move about the damp forest floor, but springtails have evolved an extraordinary skin that repels water and a variety of other liquids. Ralf Helbig from the Leibniz Institute of Polymer Research in Dresden examined the skins of 37 different springtails, and discovered that they have three tricks for keeping dry. [embed width="610"]http://www.youtube.com/watch?v=OwOL-MHcQ1w[/embed] 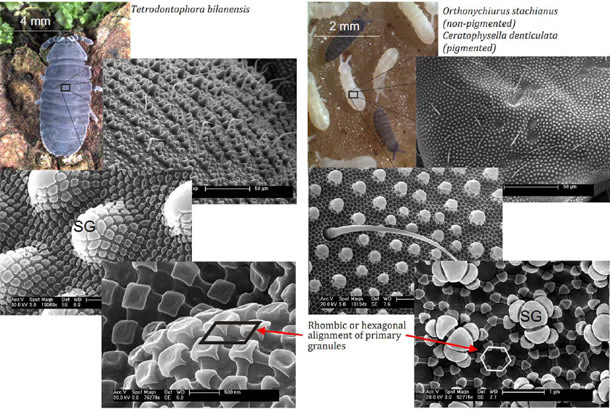 Bristles form the first layer of defence. They trap a thin layer of air that keeps water at bay. Large droplets sit on top of the bristles without touching the skin underneath. Between the bristles, most of the springtails have small studs called ‘secondary granules’. When Helbig zoomed in even closer, he saw even smaller studs called ‘primary granules’, each just a few hundred nanometres wide. They’re shaped like squares or triangles and they are connected by thin bars, in either a grid or a hexagonal honeycomb. The grids are found on parts of the skin that need to be more elastic, while the honeycombs are sturdier. The primary and secondary granules provide the second layer of defence. They work in the same way as the bristles but on a much smaller scale, creating a network of air-filled cavities over the springtail’s entire body that keep water out. The third protective feature is, as far as Helbig knows, unique to springtails. The primary granules have an overhang all the way around their rim; in cross-section, they look like mushroom clouds. Because the overhang curves downwards, it pins a bubble of air between the granules. Consider what happens if you push an inverted cup into a full bathtub: you trap a bubble of air inside. The overhangs do the same thing. 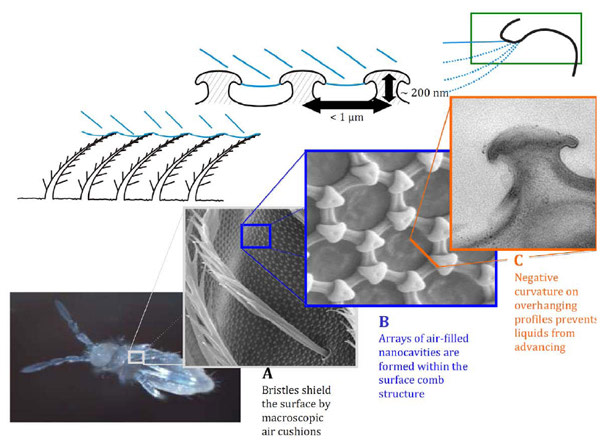 These microscopic structures are so effective that springtails stay dry even if they are completely dunked in water, under high pressure, for several days. Water cannot force the air bubbles out from between the primary granules. Even organic liquids like alcohol or hexane can’t break through. The springtails’ studded skin prevents liquids from forming a continuous film over their skin, which would choke them to death. Instead, the liquids sit on top of the granules as almost perfectly spheres. Instead of flattening out into a film, these tiny droplets slowly merge with one another to form bigger and bigger spheres, until they eventually slide off.

Liquids aren’t the only things that can’t get a hold on a springtail’s skin. Helbig found that it is extraordinarily hard to contaminate a springtail with dirt, fungi or bacteria. In fact, all the samples he looked at under the microscope were spotlessly clean. Even when Helbig exposed the springtails to massive doses of E.coli, staph and Candida (the fungus that causes thrush), the microbes couldn’t get a grip. Helbig thinks that the springtail’s skin, and especially the overhangs of the primary granules, could inspire a new generation of water-repellent, self-cleaning materials. Many scientists have already developed such materials after finding inspiration in nature. Two weeks ago, I wrote about one of the slipperiest materials yet devised, inspired by the rim of the flesh-eating pitcher plant. Meanwhile, other groups have ripped off the lotus, a plant that famously repels water using shields of air trapped by microscopic studs, much like the springtail’s skin. But the lotus-inspired materials are easily damaged, which slowly degrades the surface’s ability to stay dry. Carsten Werner, who led Helbig’s study, says, “These structures are so fragile that their anti-adhesive properties are only maintained if the leaf continuously rebuilds them. That is okay for the plant, but not for many of the synthetic surfaces based on that design concept.” It was his search for sturdier structures that led to the springtails. Their skin is more complex than any plant surface, and the structures are at least ten times smaller. They are also sturdier. The bristles can bend and flex, and the larger secondary granules protect the smaller primary ones from harm. Helbig thinks that they have evolved this way because the springtails, unlike the lotus, move about a lot. They need skin that stays waterproof even as it is jostled by debris or shaken by vibrations. Now, Helbig and Werner are trying to design synthetic materials that exploit the same shapes and have the same properties. Joanne Aizenberg, who designed the pitcher plant-inspired surface, admires the “beauty and sophistication” of the springtails’ skin. But she is not convinced that it will inspire better materials. Like the lotus, it relies on studs that trap cushions of air, and as these gradually accumulate damage, they will lose their ability to repel water. Aizenberg also adds, “The structures reported in this paper are particularly challenging, as they require the fabrication of overhangings. These surfaces would be laborious and expensive to produce, particularly at a large scale.” But Werner is undeterred. He is currently working on two ways of mimicking the springtails’ skin, the first of which should be published later this year. Reference: