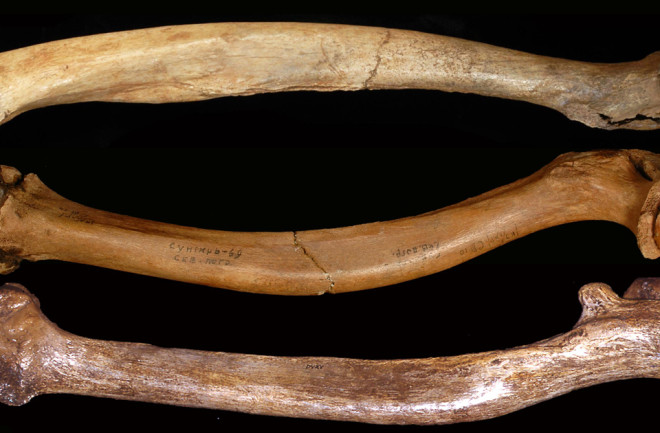 There’s something odd about the bones of ancient humans. It’s always a bit stupefying to gaze at a femur pulled from the earth and think about it being on the inside of a living, breathing human very much like yourself. But that’s not what stood out to Erik Trinkaus, an anthropologist at Washington University who studies the bones of ancient humans.

He had a pivotal realization about the femurs, skulls, teeth and other assorted skeletal fragments that comprise our best evidence of the lives of our distant ancestors: They’re riddled with deformities.

It’s tempting to write this off as a result of poor nutrition, or a lack of modern medical care and child-rearing knowledge. After all, ancient life was hard, and it’s no stretch to think that the physical stress would have imprinted itself on people’s skeletons.

But many of the skeletal deformities Trinkaus spotted didn’t quite match with those diagnoses. Most conspicuously, many of the deformities were really rare, at least by modern standards. We’re talking like .01 percent of the population rare, or one in every 10,000 people. And some of the things he saw weren’t even diagnosable.

The deformities had all been catalogued by scientists before, but no one had ever looked at them as being part of a trend until now. When Trinkaus did, it became clear that the whole set of data said something that its individual components did not.

What makes this so significant, he says in a paper published Tuesday in the Proceedings of the National Academy of Sciences, is the fact that we don’t have many samples from humans who lived tens of thousands of years ago. To find multiple instances of one-in-a-thousand diseases when you’ve got so few finds to draw from is puzzling, to say the least.

Not everyone who lived in ancient times was deformed, of course, but the key finding is that we see far more cases of deformities among ancient humans than we do in the population today.

To better understand the mystery, Trinkaus assembled a list of 66 individuals with noticeable skeletal deformities who lived anywhere from around 10,000 to over 100,000 years ago. He then picked through the various diagnoses to see if any patterns emerged.

The conditions included things like minor bone fusions and dental deformities that wouldn’t have been debilitating, but far rarer and more harmful things were prominent as well. Around two thirds of the deformities Trinkaus found were due to rare or extremely rare conditions, a number that challenges the notion of “rare.”

Some of them led to significantly shortened lifespans, as in the case of a child born around 95,000 years ago in Israel who exhibited signs of hydrocephaly, or a dangerous build-up of fluids in the brain. Another had acromysomelic dysplasia, an extremely rare condition that results in the shortening of forearms, shins, legs and feet.

Some of the deformities appear to be inherited, and others are due to genetic factors, the paper says. Paired with the high rates of such deformities, it leads Trinkaus to what probably shouldn’t be a shocking conclusion: Inbreeding was likely fairly common among early humans.

Early humans most likely lived in small groups spread far from each other, and the geographical limitations of their lives would have made reproducing with relatives inevitable. Additional evidence in favor comes from the fact that some of the specimens with similar deformities were found in the same places, implying that they were related.

Some sites contain people with very different skeletal morphologies, though, and evidence from ancient Neanderthal DNA is mixed when it comes to whether inbreeding was occurring. It remains unknown how common inbreeding was, and whether it varied widely between groups and regions. That it did occur, though, seems fairly likely.

Still, archaeologists have uncovered remains from just a sliver of the entire population of ancient humans. That simple fact undergirds the core of Trinkaus’ argument: To see diseases in so many of them that we’d be hard-pressed to find today among billions of people speaks volumes.